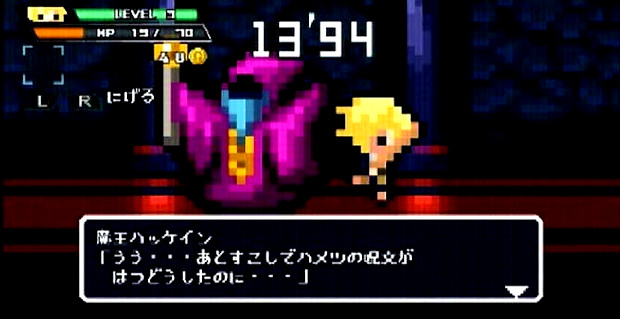 Apparently, if your game doesn’t have French in it, Quebec won’t let you sell it. This is probably something our millions of Quebec readers already knew, but one of them, Destructoid reader Mike, was unaware and has been disappointed to find that he can’t buy Half-Minute Hero from any of his local retailers.

Mike was looking forward to playing the excellent RPG game and asked publisher XSEED when it might hit Canada. Here’s what the company had to say:

Thank you for trying to pick up a copy of Half-Minute Hero.  Canadian distribution is always tricky because of the bilingual law that Quebec enforces, so for titles with limited distribution we do not create a second bilingual version specifically for Canada because it’s too expensive.  Unfortunately, that’s what happened to Half-Minute Hero.

Wal-Mart Canada and EB Canada both carry it, but their stores in Quebec may not carry them because we did not offer French bilingual packaging.  Our Canadian distributor does not have a relationship with Amazon Canada, that is why they never carry any of our products.

Sorry for the inconvenience, but the bilingual requirements in Quebec make it extremely difficult and expensive for us to provide games to Canada sometimes.  Your best bet may be to purchase it from the PSN Store online.

Wow, Quebec kind of sucks. It’s amusing to note that Canada is screwing itself out of tax revenue with a law like this, since if Mike buys the game on PSN, he gets to give all his money to the publisher rather than have the government take a slice. That’s at least a small satisfaction, although this bilingual law sounds effing stupid no matter which way you slice it.