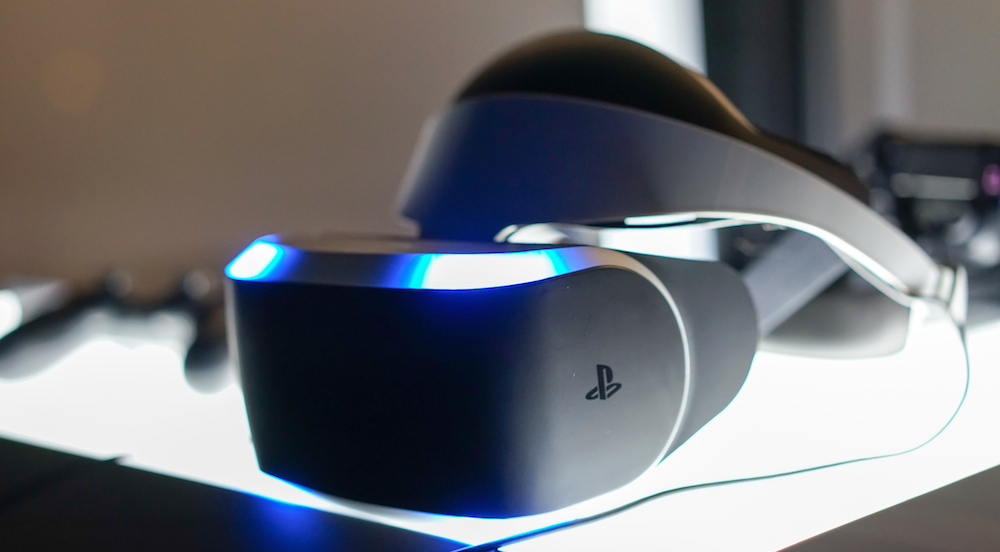 Sony choose GDC as its coming out party for its virtual reality platform, Project Morpheus. The goal was to build interest at a show where just about every developer in the industry is in attendance. And from the look of the lines at their GDC floor booth yesterday, every one of those developers had someone in line to try it out.

We finally got our faces in the headset late last night to try out the new demos that Sony prepared for the show. We were surprised to find that Project Morpheus is already on a level playing field with Oculus Rift, and even shows it up in some places.

We admired the headset before strapping it onto our heads. Sony’s version of VR looks bigger and heavier than Rift, but it certainly doesn’t feel heavy when wearing it. Trying out Oculus’ second development kit this week, I thought that it felt a little heavy on my face and nose. Sony has engineered a solution that has a couple of straps letting the back of the head do the holding, keeping the weight off the nose and cheekbones. An elastic band gets you started, but a secondary plastic band with clickable tightening points does most of the work. It’s pretty comfortable, and removing it doesn’t mess up your hair as much as Rift does.

Morpheus looks pretty slick with its glossy white finish and black matte trim. The colored lights that it uses for tracking are also attractive. But for as slick as it looks off, I can’t say that it looks cool on anyone I’ve seen wearing it. And, of course, you won’t see any of the design or trim work when you’re using it.

Sony’s London Studios have built a really impressive demo that has users deep diving the ocean in a shark cage. My nervous giggles and head darts turned into full-on uncomfortable blurts of laughter as a large shark circled around my cage, breaking it down piece by piece with its terrifying mouth. After the first few shark attacks, looking down and to my left, I noticed that my character had started bleeding a bit, with clouds of red starting to seep up from my body. It was fun, and not unlike a theme park experience.

Though The Deep was limited on the interactivity front, it’s easily the most visually impressive VR demo I’ve experienced. The clarity of the 3D effect, the quality of the demo assets, and the level of immersion were all very high. It looked less like a demo and more like a full-on VR game.

The Deep was also one of the most immersive VR demos I’ve tried. Having to sit and wait as the cage descended kept me tense, and knowing that I only had a flare gun to defend myself made it that much worse. A DualShock 4 controller held in one hand let me freely aim and fire the flare gun, and its tracking of my movements with it was spot-on. Excellent head and body tracking tech also let me turn my head in any direction and even turn fully around to follow the shark as he circled my cage.

I drew back in fear at the shark’s final attack, and I could see and feel my avatar’s body drawing back with me.

While The Deep was limited in control, The Castle let me go all-out with two PlayStation Move controllers. Situated in front of a knight dummy, I was able to use my virtual hands to punch, push, pull, and otherwise manipulate it through the Move controllers, with completely accurate 1:1 control. Later, I was able to draw a sword from my side to cut at it. I tried grabbing the dummy’s head with one hand (by gripping the Move’s trigger) and lopping it off with the other using a sword, and liked it so much that I dismembered several more dummies before continuing.

Just being in this virtual world and looking around was quite the experience. Even simple parts of it, like trying to pick up a sword, just missing, and then trying to catch it as it falls, feels impressively immersive. I saw that I was standing on a grate in front of a castle, and I tried walking forward a few steps to get a better look. I looked down and saw the moat that lied below that grate and felt a real sense of vertigo, and I felt my knees catching. This looked and felt very realistic!

As the demo continued, I was able to take hold of a crossbow and shoot at dummies and other targets in the world. By holding up a PS Move controller and squeezing the trigger, I easily took targets out. I found it interesting that I could draw the controller close to my face and close one eye to get a better look through the crossbow’s crosshairs.

The demo wrapped up with one of my shots aggravating what I thought was a statue of a huge dragon. It came alive and devoured me. Seeing my virtual head going into its massive mouth was pretty freaky.

While we’ve seen CCP’s EVE: Valkyrie before, the Project Morpheus build is easily the best version we’ve seen. It looks more fleshed out visually, and there’s much more polish in its interfaces and assets. It also feels more like a game now than it ever has. Flying around space requires more work, and taking down enemy ships requires more hits. Enemies have hit points, and they’re more than happy to dodge your missiles and come back at you while you’re trying to avoid asteroid collisions.

Even in its unfinished state, running on this non-final prototype kit, I’d happily buy Project Morpheus as is to play more of EVE: Valkyrie.

Sony has had a very strong first showing for their Project Morpheus VR platform. It’s clear that they’ve been working behind the scenes for some time now, and that this offering isn’t just a me-too product. Overall, I’ve been more impressed with what I’ve seen right out of the gate than I have with any of the numerous Oculus Rift showings I’ve attended. The device looks better, fits better, and seems to have more immersive and higher-quality demos to share.

Oculus Rift still wins on resolution, and there is less motion blur in their latest kit, though. And they have what seems like all the brain power in the world at their disposal to figure out any issues that might come up otherwise.

But both companies still have a long way to go before they have a final product. They have to build the final kit, come up with compelling experiences, and meet a price point that gamers can accept before VR will become a reality.