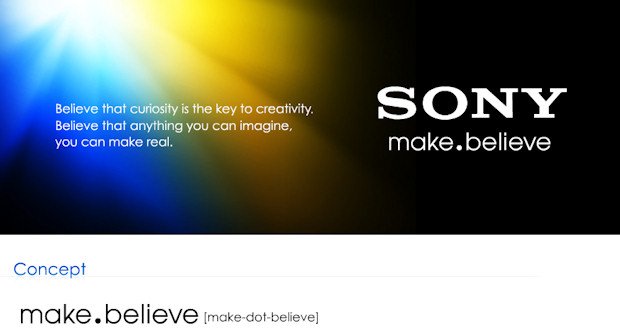 Sony has been going through a makeover ever since it announced the PS3 Slim. The PS3 logo has been redesigned, a new marketing campaign has been launched, and Sony itself has even given itself a snazzy new tag line. From now on, Sony’s new corporate philosophy is “make.believe.” That’s some deep and meaningful sh*t right there.

“As we move to transform Sony and integrate the very best in electronics, entertainment and technology into the homes of our customers, the importance of an all-encompassing and unified brand image is more important than ever,” says Sir Howard Stringer, Sony CEO. “In addition to reigniting the innovative spirit of our employees and our products, make.believe will differentiate us from countless competitors and inspire consumers around the world to embrace all that is Sony.”

Of course, this is also a very fitting new tagline for Sony, since half of what’s come out of the mouths of its executives over the past three years has, indeed, been “Make believe.”

Yes, the only reason I decided to write about this was to make that OH-so clever little joke.