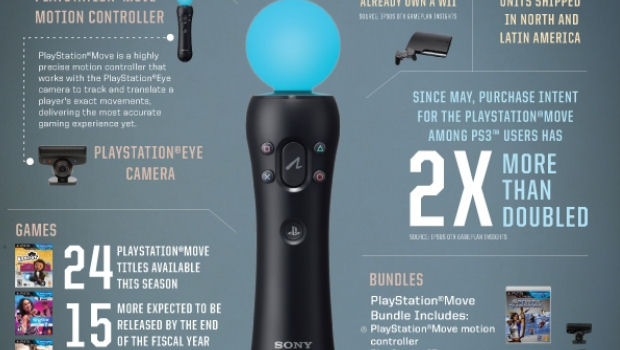 Sony hasn’t done a great job of veiling its attempts to undermine the launch of Kinect. After boasting about the EyeToy on Kinect’s launch day, the publisher is now producing slick graphics in order to show that its own waggle controller, PlayStation Move, is going to be a rip-roaring success this holiday season.

According to the distractingly busy picture, more than 60% of those interested in Move are Wii owners, purchase intent has more than doubled since May, half of the prospective Move buyers are parents, and 30% are female.

It all looks impressive, but then you realize that the graphic is composed entirely of “purchase intent” stats and include no actual purchase stats. Of course, this image is supposed to build hype toward the holiday season, where Sony hopes to sell a lot of units, but it’s still somewhat telling that Sony chose to omit anything regarding current sales figures.

Sony has been quiet on these numbers ever since Move launched. Really makes one curious as to how well it’s actually done.

Filed under... #Help is on the way!#PlayStation Move