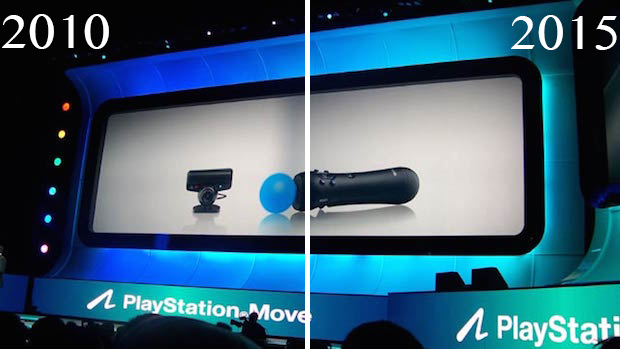 After admitting it has nothing worthwhile to show for the rest of 2015, Sony today confirmed rumors it will be remastering its 2010 press conference for this year’s E3. Called “Sony 2010 Press Conference: The DE3finitive Edition,” the remaster will allow Sony to revisit a time when it actually made new games for people to get excited about.

“Do you remember 2010? God that was a great year for us,” reminisced Sony Computer Entertainment President Andrew House during the announcement. “Killzone 3, the PlayStation Move, a new Twisted Metal… ohmygod remember when people were excited about a new Twisted Metal game? Jeez, it’s amazing what you can do when you try.”

Using new computer technology not available at the time of the original press conference, House says Sony will be able to alter and improve some of the most troubling aspects of the 2010 presser.

“One of the most distracting elements of our 2010 conference was Jack Tretton’s enormous head. Many fans came up to us afterwards asking why we had Mayor McCheese up on stage talking about the PSP and we had to explain to them it wasn’t Mayor McCheese, it was Jack Tretton. When we decided to remaster this press conference, we knew right off the bat that his head size was the first thing we had to change.”

Tretton’s much appreciated cranium reduction isn’t the only improvement fans will love as House explained the remaster will include a heaping extra dose of former spokesman Kevin Butler.

“Probably the biggest change between the original press conference and this remaster is Kevin Bulter,” House explained. “We’ll be inserting him into places he’s never been before. We’ve all seen him demo the PlayStation Move, but what if he was also eating a hot dog in the background while David Jaffe spoke on stage? In this 2015 remaster, he’s there. Kaz Hirai talking about 3D? Why there’s Kevin Butler off to the side rocking a guitar solo on the head of a dragon. This remaster will give you the most Kevin Butler you’ve seen since we fired him for appearing in that Mario Kart tire commercial.”

In addition to the improvements, Sony says the remaster will allow it to completely excise aspects of the original press conference that didn’t work, including missed cues, lighting mistakes, and the decision to show off the game Sorcery.