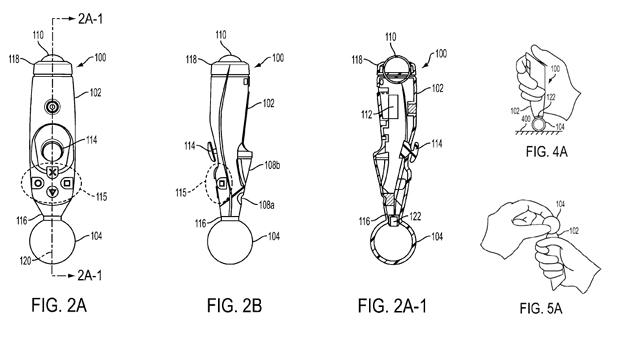 Sony’s Move motion control system is not too far removed from that of the Wii, when it comes right down to it. Yes, detecting the wand’s position in three dimensions is a huge improvement over Nintendo’s effort but the device is hardly what one would call staggeringly different.

If the Move controller shown in these patents found by PlayStation Lifestyle had been the final product, it would be more difficult to make that claim. This design filed with the US Patent Office in May of 2009 would have featured an analog thumbstick on the controller itself, possibly eliminating the need for the Navigation controller. The Move button which takes up most of the space on the final design would have been moved above the trigger.

But that’s downright blasé when compared to the other proposed features. The bottom of the controller sports a trackball and the patent suggests that this portion of the controller could be modular with different fittings. The patent uses an example of placing another cluster of controller face buttons here. The reason that such features would exist is that, in this version of Move, the entire controller can be turned with the Move Sphere facing down and used as a flightstick-style controller. Madness!

And that’s not all for the Sphere. The glowing ball of justice would also feature a pressure sensor when used in joystick mode, so pushing down on the ball itself would act like a button as well. One can only imagine what sort of creative uses that would have been employed for.

If you thought Sony’s design for Move was conservative before, this makes it look quite tame indeed.