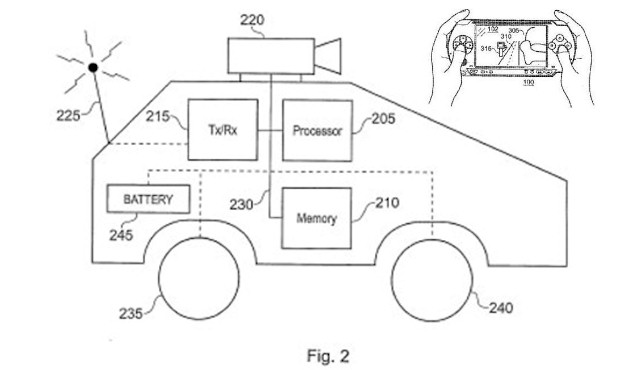 It is very rare that an idea comes along that is at once both truly brilliant and utterly stupid, but you can be sure that Sony is usually behind it. The latest hare-brained scheme to come from Sony’s idea lab is a PSP-controlled car, the patent for which has recently surfaced. That is as awesome as it is ridiculous.

As with many patents, it’s more than likely this will never see the light of day. That’s a shame, because I genuinely would like a toy car that I could control with my PSP. It would take me back to my childhood and the era of RC vehicles, and I would not be ashamed to play with it. Not as much as I should be, anyway.

The car would be controlled using the PSP’s wireless function, and would also have a camera mounted to the top of it, allowing players to remotely view the vehicle’s surroundings on the PSP screen itself. How awesome is that? The user would be able to record the camera footage as a movie, and as if that wasn’t enough, the proposed car (known only as 200) has a built-in microphone that can play music or realistic vehicle sounds.

The “200” could also be used in special videogames. The potential here is immense, as the PSP screen could theoretically transform images of your living room and turn them into virtual environments to create what is being called an “augmented reality” for the car to drive around in, with invisible boundaries dictated by the player.

Sony, if you do one thing right this year, let it be the release of this inane, wonderful thing.