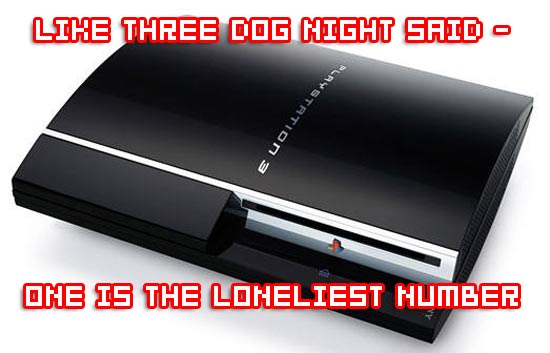 I’m not one to go all teary-eyed over any negative news involving Sony, but this next bit of info coming out of Dean Takahashi’s blog was more than enough to at least tug at my sympathy strings a tad. While commenting on recent NPD numbers, he had this to say concerning Sony and the PlayStation 3:

“One piece of news that came out this week was that Sony pleaded with third-party developers not to abandon its struggling platform. That change in attitude is a marked difference compared to the arrogance of past years. The argument is that the PS3 will show its strength as developers learn how to make games for it. But developers know they can staff four or five Wii teams with the same number of people it takes to make one PS3 game. We may have a glut of Wii games soon, but that’s not as bad as not having enough games on the PS3.”

As someone who not only enjoys many games that got their start on a Sony console (as well as  recently acquiring a PS3 for myself), this isn’t exactly what I was looking to hear. Considering all of the blunders they’ve managed to bring upon themselves since the PS3 name was first whispered, I can’t say that I’m totally surprised by this. Even so, I firmly believe that there are tons of people who want nothing more than to see Sony turn this whole mess around, and get back to releasing those great games we all adore as soon as possible.

My advice to Sony is simple — whatever it takes. Adding backwards compatibility to the 40GB PS3 would be a healthy start in which to build upon. After all, we  all need something to do while you sort this all out. Question is… is it too late?

[Via Joystiq — Thanks Rishi]