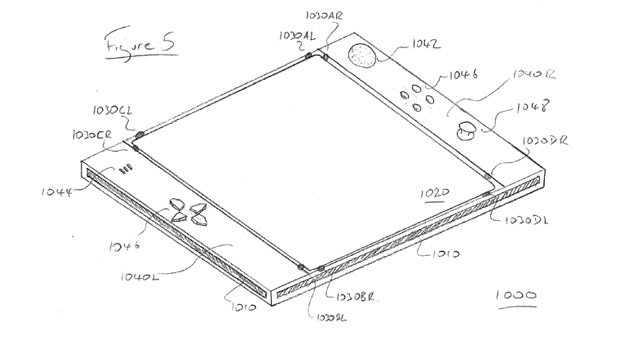 That’s not going to be the final name, right?

A patent for a device called the EyePad was filed by Sony Computer Entertainment Europe last year and has since gone public (via Gamechup). The description for this tablet is as follows:

“An input device for an entertainment device comprises a first main surface, one or more side edges, one or more motion sensors operable to generate motion data, and a wireless communicator for transmitting the motion data to the entertainment device, wherein an elongate illuminated region extends along some or all of one or more of the side edges; in addition the input device may comprise a first stereoscopic camera and a second stereoscopic camera having respective viewpoints located at opposing corners of a first area of the main surface, the field of view of each stereoscopic camera encompassing a first volume of space immediately above the first area, wherein the first and second stereoscopic cameras are operable to generate respective stereoscopic images, from which a first depth map and complementary second depth map may be generated for opposite sides of an object placed within the first volume of space.”

The patent describes the Sixaxis controller, the PlayStation Move, and the EyeToy, saying: “Whilst [these are] useful for many types of game, such as shooting games and dance games, there will nevertheless be games or other applications for an entertainment device where an alternative input device may be more suitable.” I’ll stick with more traditional input methods, if at all possible.