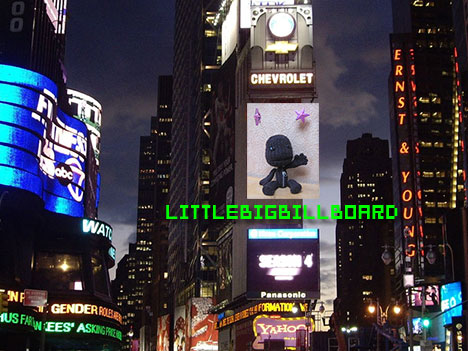 Sony is a company that’s become famous (infamous?) for its bizarre advertising campaigns (see: “This Is Living” and a poster that Sony rejected, dubbed “Thumbcock” by Colette), and while this latest idea doesn’t quite fall into the “weird” category, it’ll probably still raise a few eyebrows.

Obviously, Sony is counting on its charming puzzle platformer, LittleBigPlanet, to move more than a few PS3s this fall (and the game’s developer, Media Molecule, believes that it will). Accordingly, Sony has really been pushing the game — declaring that its iconic (and crochet-able) lead character, the Sackboy, should become the mascot of the PlayStation brand.

In order to help raise the profile of the game among the masses, the game’s ad agency, Deutsch, has come up with an intriguing campaign. According to AdAge, Sony will create around 1,000 “LittleBig billboards,” small yard sign-size boards that will be put up in New York City, Los Angeles, and San Francisco. These aren’t your average flyers, though — they’re going to have “working lights and ladders and other high-end art and design.” Pretty nifty, eh?

To boot, Sony’s comfortable with the idea that a few of the signs will likely be stolen (their small stature makes them easy to run off with). In fact, a spokeswoman went as far as to wish for the thefts, so LittleBigPlanet fans can spread the word (and maybe even make some money by putting the ads up on eBay). So if you’re in either of the three metropolises mentioned above, keep your eyes peeled for some pilfering!