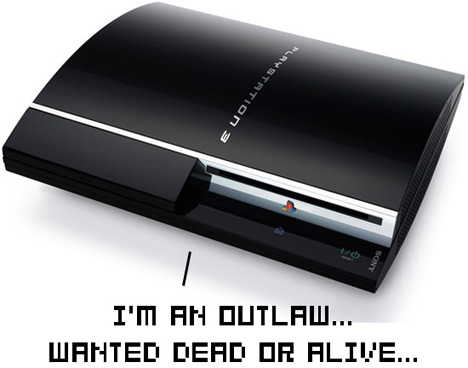 In Sony’s never-ending quest to convince each and every one of us that their new PlayStation 3 is actually a computer, it seems they left out any of their famous DRM to protect people from making backups of movies (and potentially games) directly to the system’s hard drive.

Gizmodo brings us word of how insanely easy it is. Apparently, once you’ve installed one of the tastes-like-silicon flavors of Linux on your PlayStation 3, you enter a few simple commands and voila! you have a backup residing comfortably on the internal hard drive. See the quote below for the hardcore, totally uncensored shell commands that can make this sexy bit of DMCA violation happen:

It looks like enterprising hackers have figured out a way to dump Blu-ray movies using nothing more than a PS3 and Linux. Now, there’s a whole lot of Linux jargon to comb through, but the premise is simple: boot up the appropriate flavor of Linux, then input the command “dd if=/dev/cdrom of=/blu-raymovie.iso” and that should do it. It’s interesting to note that similar methods are used to dump (“back up”) PS3 games themselves.

I’m going to go out on a limb and predict that Sony (or, at least the part of Sony that cooked up that whole DRM rootkit fiasco a while back) is not exactly happy that this is so easy to do. Then again, it could be a case of their engineers (some of the finest in the world) telling their legal department (bloodthirsty harpies) to screw off.

We’re hoping it’s the latter. Nerd rage is so hot.