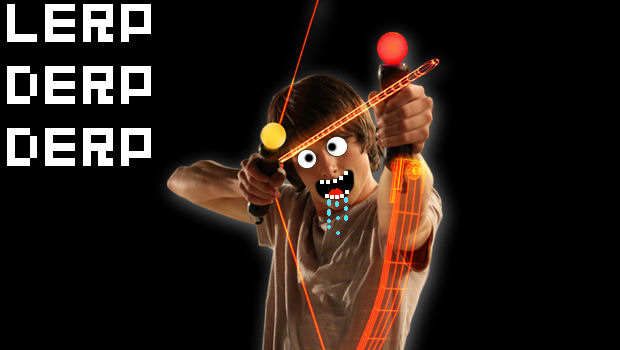 With PlayStation Move gearing up for launch this year, Sony is pushing out the boat to try and make us forget that it’s basically copying the Wii. The best way to do that, of course, is the imply that the Wii ruined motion control for everybody, and that Sony is here to save the day. Paging Peter Dille …

“The Wii has been wildly successful but at the end of the day it’s not a very precise experience and it relies on the wand,” says Dille, aiming the bullsh*t cannon and firing with abandon.”Microsoft’s approach appears to be no wand, no controller, just a camera, which means that your body’s the user interface. Our solution and point of differentiation is around precision, because we’ve got the camera — the Playstation Eye — and the motion controller which has the light at the tip, and the camera tracks the light very precisely in 3D space.

“Hardcore gamers have looked down their nose at motion gaming: it’s not particularly satisfying for them because it’s not terribly precise or challenging, it’s more social. So we’ll have games that the whole family can play that are very social, but we’ll also be able to do hardcore gamer games via a motion device that has never been done before. It’s too early to say what the killer app or signature game is but we’ll continue through the spring and late summer before we make a decision on which game is the poster child or the best one to move the Move.”

Considering everything we’ve heard about Move lag, and the fact that Sony pulled this Move thing out of its ass in a panic to deal with the Wii, I hope I can be forgiven for laughing at the company when it tries to diminish what the Wii has done. The very reason Sony is following the motion control fad like a loyal little puppy is because the Wii was so successful. At the end of the day, we only needed one console to do motion control. Watching Sony and MS fall over themselves to cynically try and replicate the Wii’s success (which they shall fail at) is absolutely pitiful.