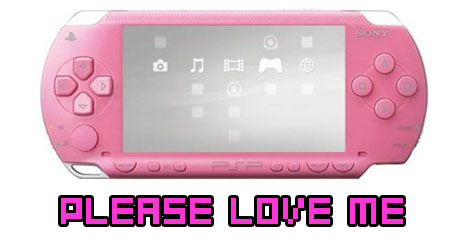 Poor Sony. At last year’s E3, they unveiled their newer, slimmer PSP in shiny new colors, promised more games were coming, and basically convinced me that there was hope for the little handheld. I bought my red one, happily buzzed my way through Crisis Core, and waited for all the other excellent releases that were promised.

In a recent interview with Pocket Gamer, Sony Europe VP of publisher and developer relations Zeno Colaco spoke about the problems hindering the PSP’s success, saying “We need to revitalize the developer community to get behind PSP.” Colasco also mentioned that the handheld had relied too heavily on third party content, among other issues.

On the future of the PSP:

“So from my perspective, what’s important is we continue to tell publishers and developers that there’s an opportunity to make money on PSP, which is something that will become apparent over the next two years as the network services are developed,”

I’m trying to be patient, Sony. I really am. I love the little handheld, and if there were more quirky games for it I would probably play it a lot more. I loved Patapon, now all you have to do is keep it up. Have you already given up, or are you still hoping to see the PSP get more developer action?

[Via Games Industry.Biz — Thanks, Joe]