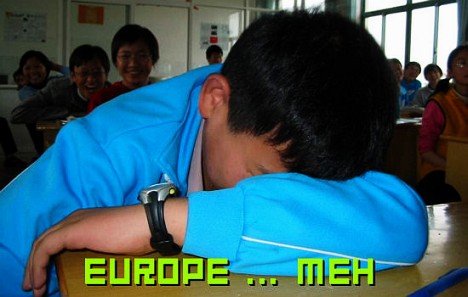 SCEE boss David Reeves claims that developers don’t want to translate their games for Europe because they don’t think it’s worth the effort. There’s not enough incentive for them to translate the games during development, so that’s why we’re left waiting up to six months for something like Brawl — the developers just don’t care. That’s right, Europe — according to Reeves, developers actually cannot be f*cked with you.

Reeves said he would “love” to have worldwide release dates for everything, but states he could only do that with the UK, and fears that if he excluded the rest of Europe, he’d upset everyone else.

“Well some developers would say they can do [translations during initial development]. Talk to Ted Price at Insomniac and he builds it in at the beginning,” stated Reeves. “We’re trying to educate all our developers to do that but it’s something that’s going to take a while.”

“But even if you talk to Guerrilla, Namco, Square Enix, they all do it in English to begin with and then think about localization later. You’re absolutely right, we should do it at the beginning. But they look at it like, ‘How much can I get for a Dutch version of the game?’

So, developers don’t care because they don’t think our money is worth it. Fair enough I suppose, but are they seriously trying to claim that the time/cost of translating a game is not more than covered by the sales of that game in an entire union of countries? With the ridiculous expense of games in the UK alone, I find it hard to swallow that our money really isn’t worth the effort. Do the Dutch really not buy videogames? If that’s the case, why are they bothering at all? It seems like a rather short-sighted excuse from developers to me.

“With PlayStation Store we could probably go in the UK almost day and date. But then what are the Germans and the French going to say to me? That I’m Anglo-centric,” added Reeves. I can at least partially understand that — the last thing you need is to be called a pro-Britain fanboy.