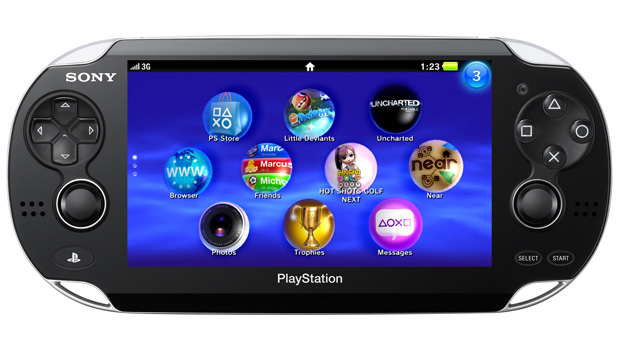 [Update: Sony has posted photos and hardware specifications of the NGP here. The CPU is a quad-core ARM Cortex-A9 processor, and here’s the size of the unit: 7.17″ (width) × 3.29″ (height) × 0.73″ (depth). You can check out 13 photos of the NGP in the gallery. In addition, Sony has confirmed that “NGP will be able to play PSP titles, [PSP] minis, [PSOne] classics, video and comics from the PlayStation Store.”]

At PlayStation Meeting 2011 in Tokyo today, Sony officially announced the successor to the PSP. It’s codenamed “NGP” (“Next Generation Portable”), and it appears to have an answer for many of the common complaints about the PSP platform — and then some. As you can see, its body looks very much like a PSP, but it’s larger than the PSP-3000, since it’s packing a five-inch multitouch OLED screen at 960×544 (four times the pixels of the PSP). Here’s what else we know about the hardware:

The screen can distinguish actions such as “touch, grab, trace, push, and pull.” According to the developers (both first- and third-party) who showcased their wares at the press conference, the “NGP environment is very flexible and very easy to develop for,” and apparently, “On NGP, we can enjoy the same quality as PS3.” In fact, Hideo Kojima came out on stage to show an in-engine cutscene from Metal Gear Solid 4 rendered natively on the NGP, running at 20 fps.

Other games demoed at the event include: an Uncharted title with touch-screen interaction; a Hot Shots Golf game where the NGP’s motion-sensing tech provided first-person golfing; Yakuza; Monster Hunter; Dynasty Warriors; and Epic Games’ Dungeon Defenders, which is currently available on Android. NGP games won’t come on discs — they’ll actually be sold on flash-memory cartridges that will hold the games themselves, as well as save games and add-on content. There’s no word yet on battery life, and that’s disconcerting — how much juice could a device with this much gadgetry under the hood possibly have?

Sony’s NGP will be out starting this holiday season (presumably, that refers to Japan); there was no mention of a price. We’ll update this post with more info as we get it. So what do you guys think: is this something you might be interested in? How much do you think it’ll cost? Does it pretty much kill your anticipation for the Xperia Play (PlayStation Phone)? Hit the comments!