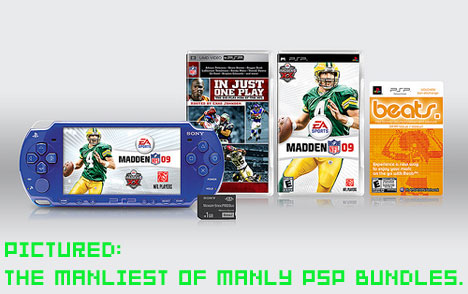 Historically, Electronic Arts’ Madden NFL games have sold systems, determined the outcome of the console wars, and launched a thousand ships. Sony are hoping it’ll move some units of their handheld this summer, when it ships with another PlayStation Portable bundle, the “Madden NFL 09 PSP Entertainment Pack.”

The bundle will include Madden NFL 09; a PlayStation Network voucher to download the overlooked Beats from the PlayStation Store; a 1GB Memory Stick; and the only UMD Video you’ll ever own because you have no choice, NFL: In Just One Play, a football clips showcase hosted by Chad Johnson.

But most importantly, the bundle will ship with a “Metallic Blue” PSP unit, exclusive to this Madden NFL 09 package. Unlike the the God of War bundle that ships with a red PSP stamped with an image of Kratos, this blue Madden NFL will not have a picture of Brett Favre on the battery cover. Sorry, boys.