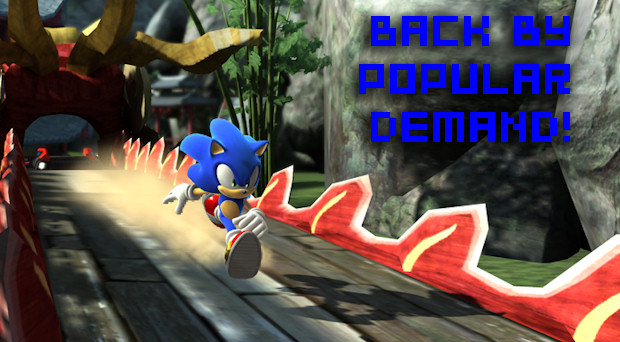 Yes, you read that right. Sega has announced that Sonic Unleashed, for some infernal reason, deserves its own downloadable content, A patch has been released for the game on Xbox 360, which paves the way for this new DLC which is available for download now. Hurry before they’re all sold out!

The downloadable content consists of a level pack for the Chun-Nan region of the game, and will include special “hard mode” challenges and a range of brand new levels — four speed run stages, and two Werehog stages. Hopefully these levels won’t demand that you backtrack through 90% of the game, picking up stupid medals, like the rest of the game does.

This new pack sells for the reasonably cheap price of 250 Microsoft Points. Of course, that’s only cheap if you actually like Sonic Unleashed. If you’re a bitter and jaded Sonic fan who once again had his hopes thoroughly crushed by Sonic Team’s latest slap in the face to hardcore Sega fans, then anything more than “free” may be asking too much.