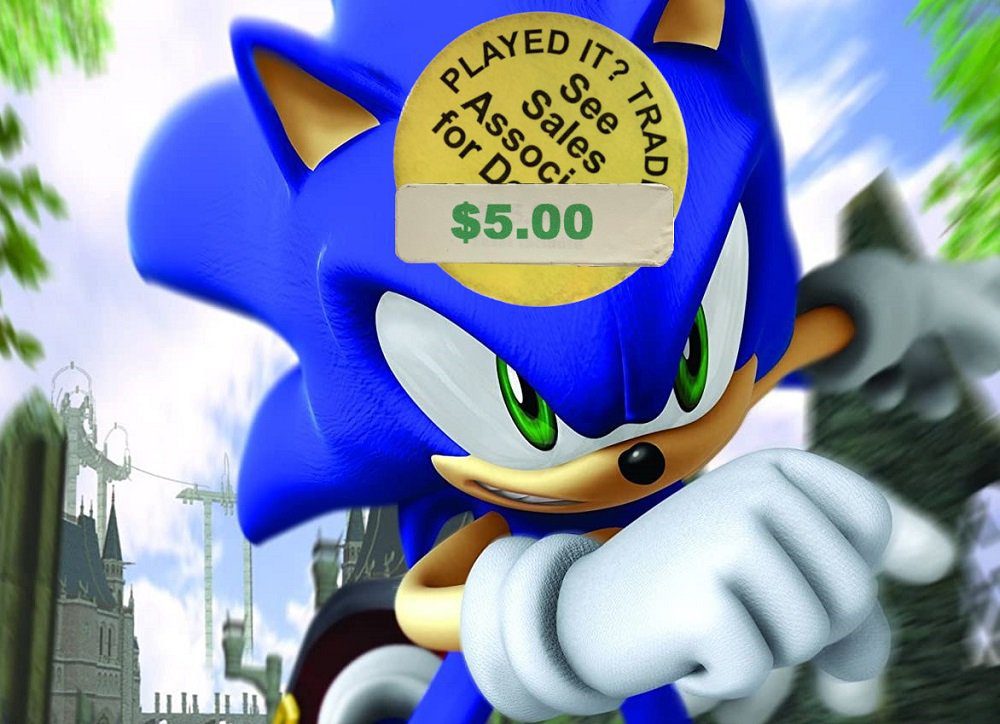 Thanks, Sega, this kusoge was exactly what I wanted

This may sound peculiar, but I don’t necessarily pick games for this column and expect to hate them. Spelunker, for example, I legitimately like, despite its reputation. So I went into Sonic the Hedgehog ‘06 with a little bit of history with the title. I figured I’d mostly be picking it apart for its mediocrity; a disappointing release for the new generation of consoles. I’d probably make fun of the typically daft Sonic plot.

But after I sat down with the game for a little while, I got this feeling of betrayal. I was warned, sure, but someone should have intervened. The person who sold it to me should have first demanded a psychological evaluation. My PS3 should have just obliterated the disc. Why does no one care that I do this to myself?

What I’m saying is Sonic ‘06 is shockingly bad. I thought I knew what I was in for, and I was wrong. 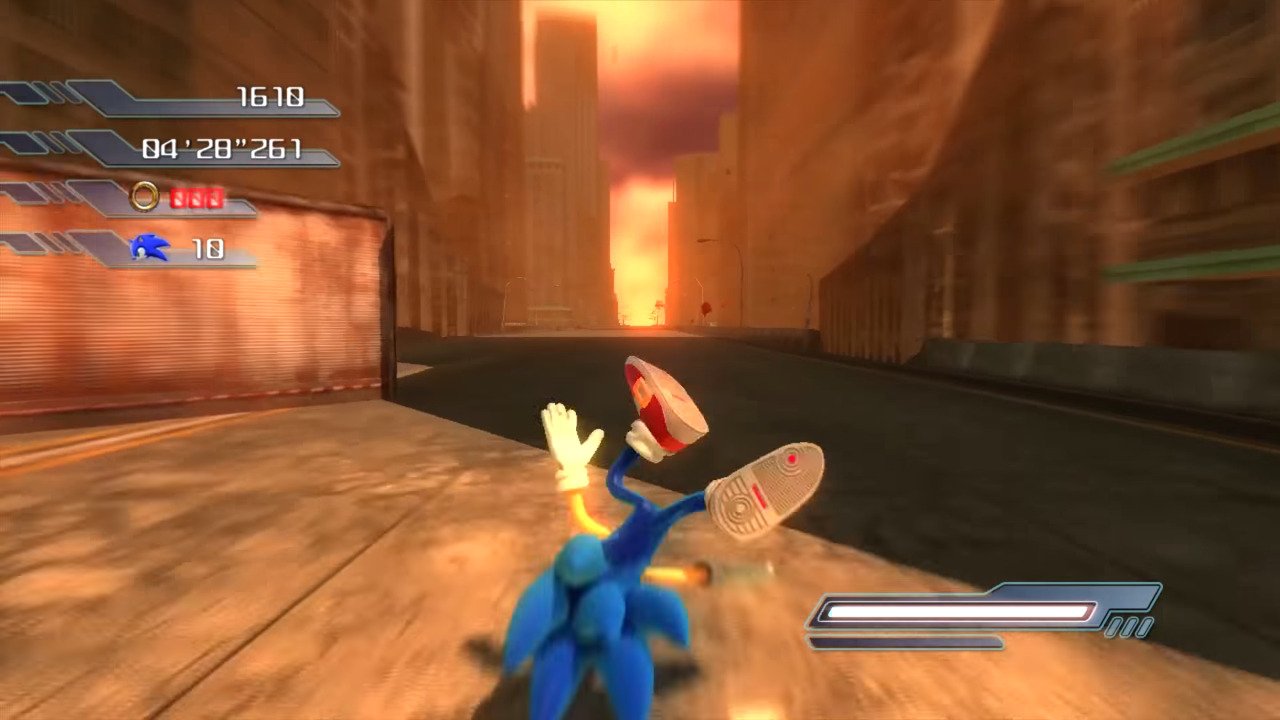 My first experience with Sonic ‘06 was back in, well, 2006. My best friend in college was a huge Sonic fan. Massive. Sonic Riders, Shadow the Hedgehog, he ate it all up. Don’t get me wrong, he wasn’t completely blind to the series’ declining quality. It’s fine. At the time, I was still in love with Star Fox and we were able to comfort each other while the caskets of our favorite franchises were slowly being lowered into the ground.

He kept the faith, though, so he scooped up Sonic the Hedgehog on release. Oh, he knew it was a bad game. He played it quite a bit, but was quick to demonstrate to me its flaws. The one that I remember best was a level that starts Sonic out on a grind rail, but every time the level loaded, the blue blur would just blur past the rail and into the awaiting death below. Every. Time. Later, he eventually returned and told me what the problem was: he was pressing a direction on the stick when the level loaded, and apparently you weren’t supposed to do that.

I don’t remember if I ever touched the game at that time; I don’t think I did. I’ve never been much of a Sonic fan. Maybe as a child I had some appreciation for the titles that I’d play on my cousin’s Genesis, but the Sonic Adventure games had me scratching my head to see the appeal. Oh, Chao Garden? Yeah, that’s whiz. 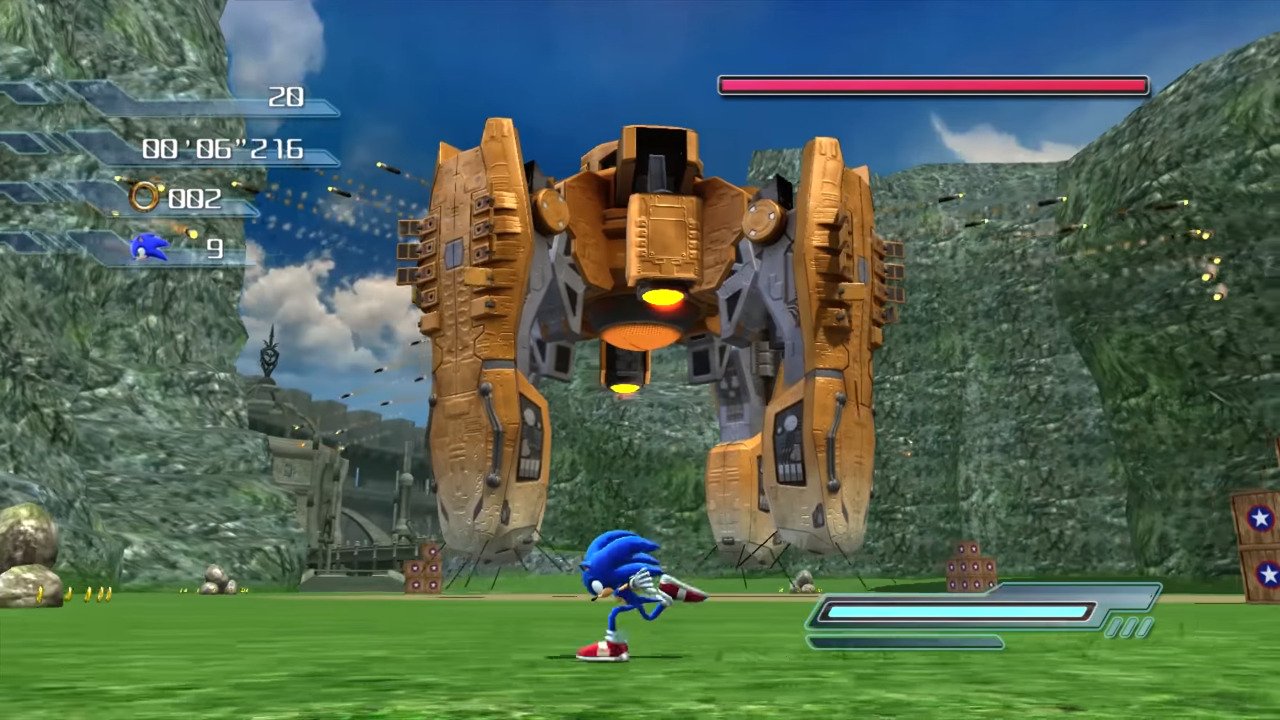 The problems with Sonic ‘06 are apparent the moment you start playing it. The camera is locked inverted on both the X and Y axis and there’s no way to change it. Fine, I can get used to it. The framerate plummets frequently, but things don’t just get choppy, the whole game completely slows down. The game controls like a shopping cart that just gained sentience and became aware of the horror of its existence. The loading screens are glacial, and if you fail a task, you have to go through four of them to try again.

Just grabbing rings in the first stage is a pain. When the blue blur is at top speed, it feels like he ignores commands completely. This is at its worst when there are pickups in front of you or the little dunce starts leaning dangerously towards the edge of a loop. The camera doesn’t give up any fucks, either. It constantly gets stuck behind scenery, tries in vain to follow the action, and is sometimes preoccupied with showing you something cool happening in the background rather than what’s directly in front of you.

The best parts are when you can take a hand off the controller. Grind rails, boost sections, the little wall jumpy things; they all give you a chance to reach down and pet your dog (or cat, if you’re into that sort of thing). They look cool, I guess, they’re just kind of shallow and pointless. 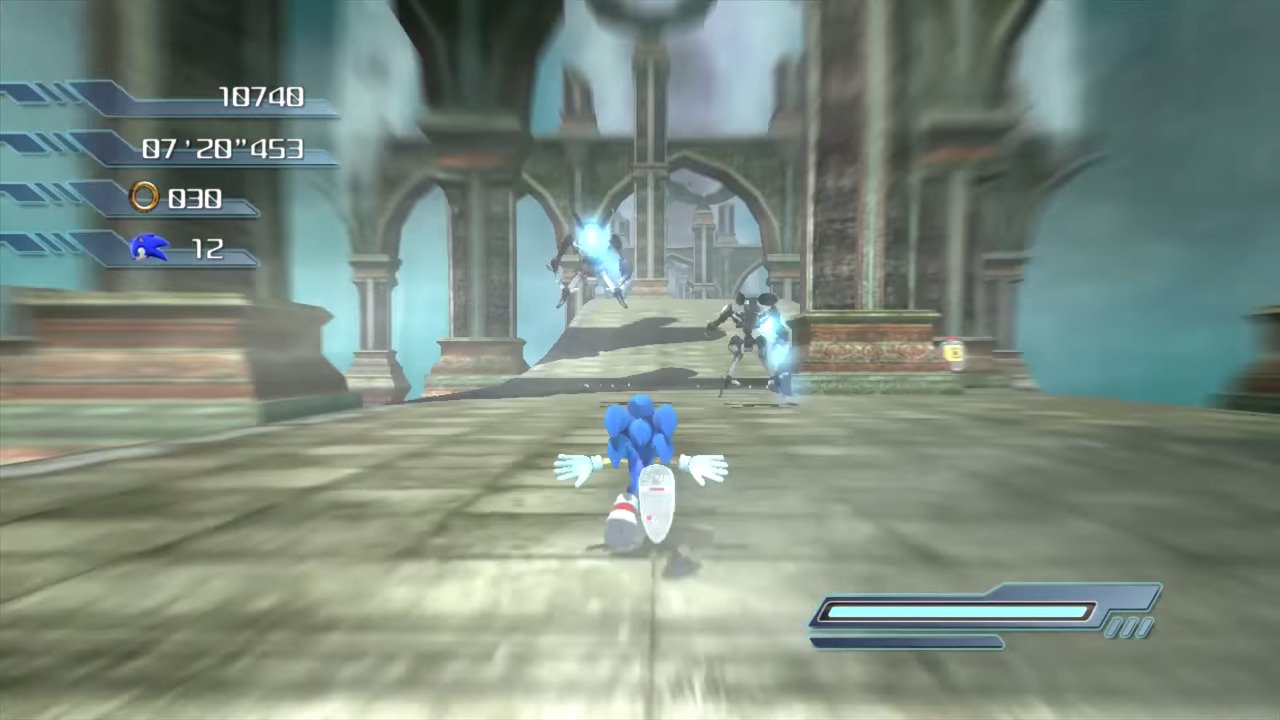 The story is a nauseating, disconnected mess. It all revolves around Princess Elise, who Dr. Eggman wants for her connection to the Flames of Disaster, which will let him rule the world or something. Most of the plot is Elise getting re-kidnapped and Sonic trying to get her back. Constantly. Oh my goodness, constantly. Sonic turns his back for a second and, whoop, she’s gone.

There’s time travel, the Chaos Emeralds do what they do (which is anything the writer wants), and the story even includes interspecies romance. Even if the plot was actually coherent, we’d still have to put up with insipid lines like, “If you have time to worry, then run.” At least the cutscenes look nice for a 2006 title.

You can also play as Shadow the Edgehog and Silver, who is also a hedgehog, but from the future. To the game’s credit, each character’s chapter has its own style of gameplay, with Shadow driving crappy vehicles and Silver throwing things. They each tell their own side of the story, and honestly, I almost started liking Silver’s gameplay. The framerate chugs like a train submerged in molasses, but throwing stuff — when it actually works properly — is satisfying and his platforming is mostly inoffensive. Physics based attacks were so popular back in 2006. Just look at Half-Life 2 and that expansion for Doom 3. 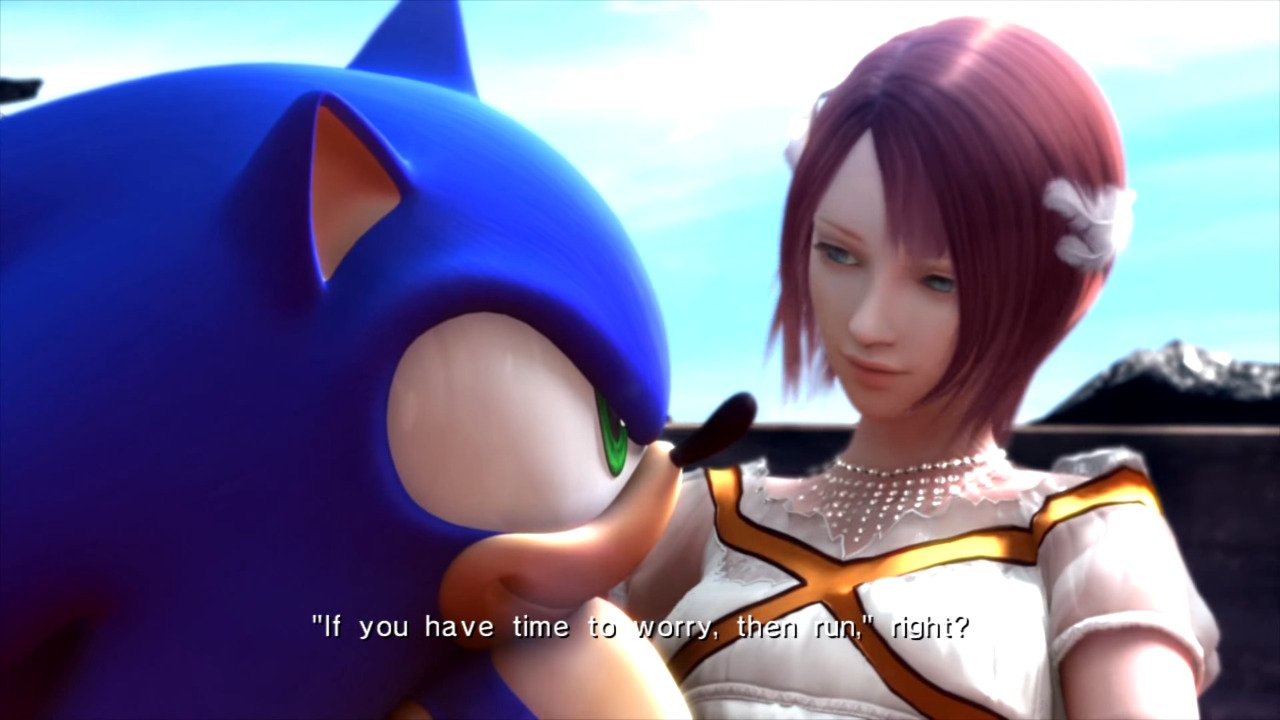 Sonic ’06 is absolutely excruciating to play. It seems that every few minutes it comes up with new ways to break and screw the player over, but there’s sort of a reason for its failure.

Sega wanted this big, new, next-generation Sonic the Hedgehog to revitalize the franchise and celebrate the series’ 15th anniversary. All hands were on deck until Sega decided they also wanted Sonic on the upcoming Wii, and Sonic ‘06 wasn’t going to fit with its specs. So, in its infinite wisdom, Sega slashed the team in twain — with one half staying on the PS3/360 version, and the other half going to work on what would become Sonic and the Secret Rings. Around the same time, series co-creator, Yuji Naka, dropped from Sega and took off with 10 high profile staff members.

Normally, you’d expect a publisher would either extend development time or replenish the ranks of their developer so they could meet their deadline, but no. Sega was insistent that this title get released by the end of 2006 as a celebration of their beloved mascot’s anniversary. This would result in the video game equivalent of suffocating someone with their own birthday cake. 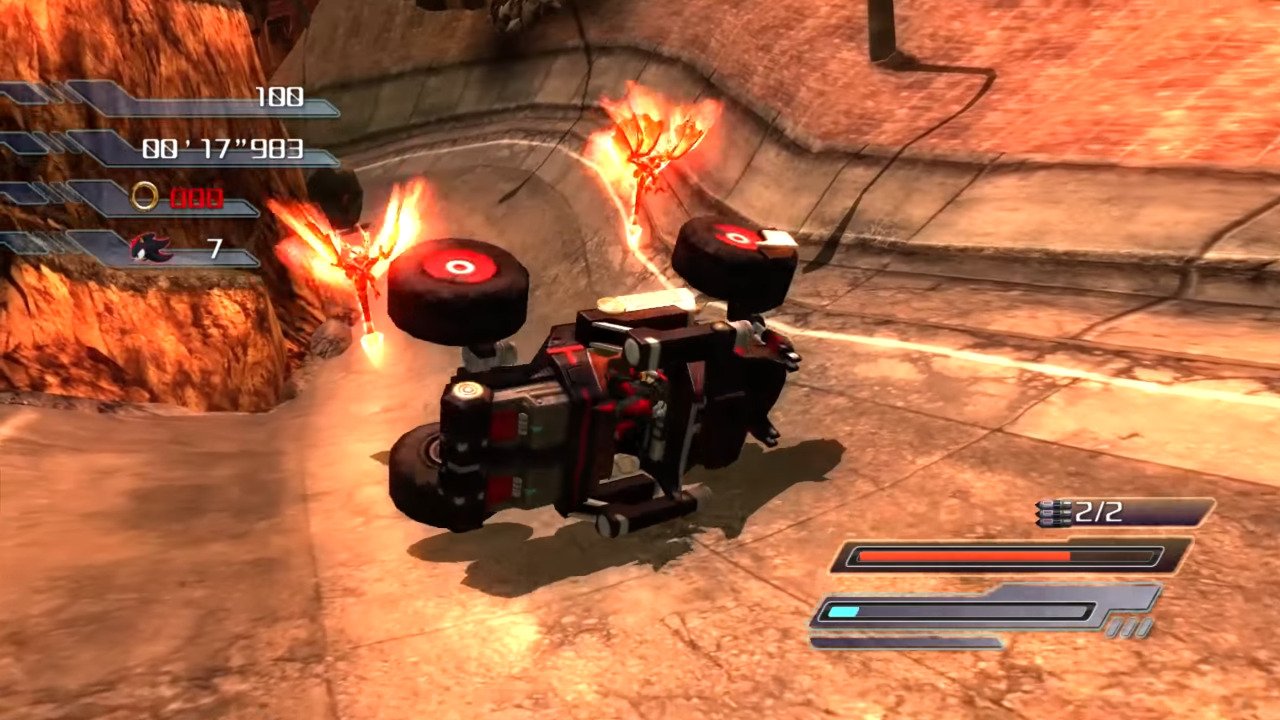 The team had to rush to make a complete game, which meant that they had to forego the typical pleasantries of bug testing and polish, and does it ever show. Most of Sonic ‘06’s problems come down to things that should have been fixed in the final product. I think that if the team was actually given a proper chance, they might have pulled something reasonable together. The pieces are there, they were just put together with a glitter glue stick. I still doubt I’d enjoy the finished result — as I mentioned, I’m not really a Sonic fan — but I probably wouldn’t be talking about it like it crawled out of my toilet.

But even if we absolve the dev team of sin, Sega still decided to release this at full price. It even had the gall to release DLC for the game. Paid DLC for an unfinished game. Classy. This was its attempt to establish the series on a new generation of hardware, and instead it cemented it as a laughing stock.

Both the Sonic franchise and Sega itself has had ups and downs since then. Behind every Sonic Generations and Sonic Mania there seems to lie a Sonic Boom: Rise of the Lyric and Sonic Forces, but even those games don’t reach the nadir of Sonic ‘06. I assume. Please don’t make me play them.