As we broke down in our Asura Guardian guide, Guardians are a subclass of enemies that can essentially be considered minibosses. The Shark is a Guardian that’s found on the desert island of Ares, and is exceedingly easy to take down. Here’s how. 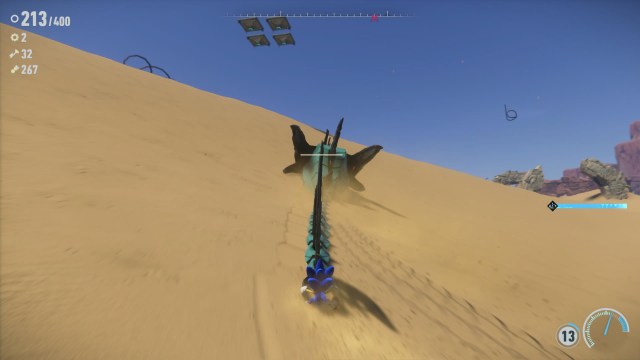 Once you spot a Shark, Sonic Frontiers will dramatically pause and let you know that the battle has begun with a title card: so there’s no way to be completely surprised by its initial strike from under the sand.

Run in circles around its fin that’s poking out, and when it leaps out of the sand, notice the lock-on signature on its tail. Dash toward it as soon as it rises out and latch on with the attack button. Once you’ve grabbed on, follows the on-screen QTEs and then smash it

From there the rest of the fight is self-explanatory.

Sonic will grip the tail of the Shark in a scripted sequence, complete with directional QTEs. Just tilt the analog stick in the direction the game is asking for, and keep going until it crashes.

Once it does, it’s completely open for combos. If you’re fast, you can knock the Shark out quickly. If you don’t finish it off (or you fall off), just repeat the process from step one.