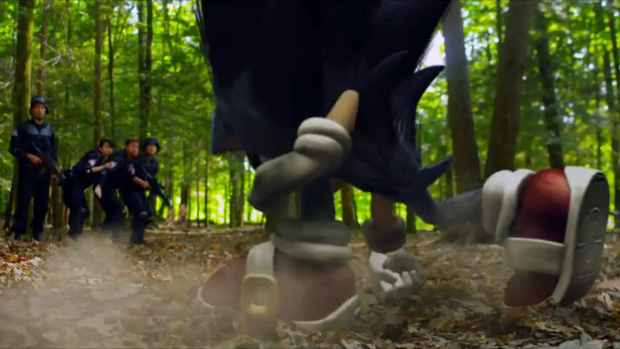 As promised, Blue Core Studios held the world premier of director Eddie Lebron’s Sonic at MAGFest this past weekend. The viewing wasn’t without a hitch, however. The final cut of the film was lost as a result of a Trojan, so instead we were treated to a production cut with several effects still not added (man, was that good for a few laughs!). After MAGFest ended, the team spent the next few days putting the movie back in a watchable state, and here we are. I’m still not too happy with the audio mixing, but whatevs.

The nearly 20-minute short stars Jaleel White, reprising his role as the Blue Blur from the three DIC Entertainment Sonic cartoons. Allfather Niero believes that Jaleel really phoned in his performance, but I think he adds a warm element of familiarity in a film that is otherwise very… off. Eddie says that Sonic is a mere spec film, but I would have rather he fleshed out and made a standalone tale that actually went somewhere, like his Mega Man film.

But I’ll give credit where credit is due: The Robotnik actor is AMAZING! I also like the surprise cameos from various Internet personalities like brentalfloss, James “AVGN” Rolfe, ScrewAttack’s Stuttering Craig, That Guy With the Glasses’ Doug Walker, and Egoraptor. So there’s that.

Let me know what you think, especially of Sonic’s freakishly hairy character model.

Filed under... #Celebrities#Offbeat#Sonic#Things gamers do