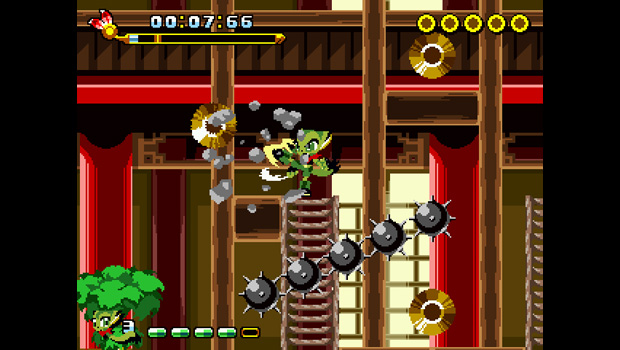 Oh, did I not mention Freedom Planet before? Of course I have, silly! More importantly, have you played the demo yet? ‘Cause you should totally do that if you haven’t.

Freedom Planet fills me with so many good feelings, and it’s not hard to see why. It mashes together all of my favorite Genesis games — Sonic the Hedgehog, Rocket Knight Adventures, Gunstar Heroes — and serves up a fresh, stylish, hi-octane animal-mascot platformer that would have fit in well during the 32-bit era. “Clone” or not, I’m pumped for the game’s release in 2014.

Developer GalaxyTrail would like to bring Freedom Planet to as many platforms as possible, thus the reason behind the Kickstarter campaign. The $2000 goal was set to ensure that the game could be exported to Mac, XNA, iOS, and eventually Android and HTML5. No need to worry, because after just one week, that goal was completely shattered — over $10,000 in the bank with more than three weeks left until funding ends! All that extra dough will be used towards animated cutscenes, more voice work, extra playable characters, a webcomic, and more.

GalaxyTrail also wants the game on Steam, so swing on over to its Greenlight page and check that box. Freedom Planet is shaping up to be quite the ride, and it’s up to you to do the smart thing and give the game an extra push (as thought it actually needs it anymore!).