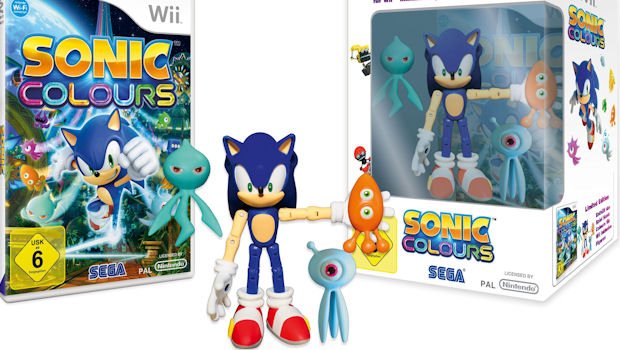 I didn’t even know this was a thing, but apparently it is. Sega has seen fit to bring out a limited edition version of Sonic Colors, a title that Sega is proudly calling one of the best Sonic games ever made.

The Sonic Colors limited edition comes with a bunch of toys. As well as the obligatory hedgehog customers will also get three Wisps — the colored aliens that give Sonic special powers during the course of the game. The Wii version will contain a White Wisp, an Orange Wisp and a Cyan Wisp. The DS version packs a Yellow Wisp, Red Wisp and Blue Wisp.

The Sonic figure looks kind of janky, with weird joints that give him Popeye arms, but the Wisps are neat if you’re into that sort of thing.

So far it seems to be listed for Australia and Europe, with no word on a North American release. We’ll see if one comes our way, but Sega does seem to like giving PAL gamers special treats.