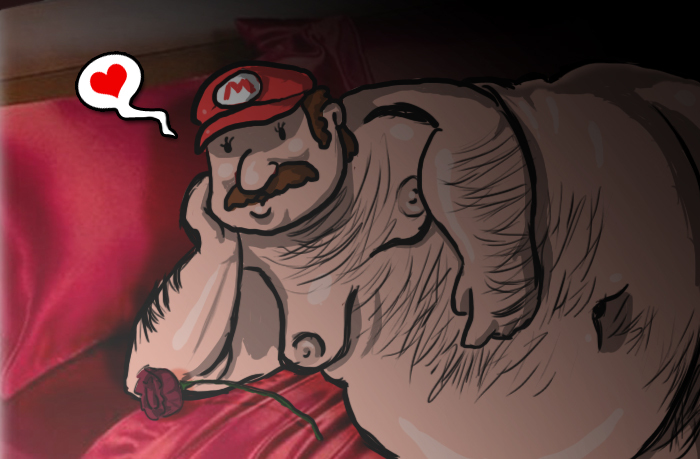 As the years progress, videogames seem to become more and more realistic. Game developers spend long hours chiseling away at their characters and environments, going for the most photo-realistic look they can conjure. Instead of the on-rails system of most retro games, you’re given choice and thus feel more a part of the game. Storytelling has evolved, using game mechanics to operate and bringing out emotions in the player, something I for one could have never foreseen 20 years ago.

There is one new feature of videogames that I feel has been overlooked. It can bring out the deepest, heart-fluttering emotions from the player. It even progresses the game in every single way because it is an integral part of modern gaming. Without it, we would be back to stage-one. The Z-axis would be nothing more than an old wives tale and all games would function on the “get to the finish” game mechanic. Yes, this thing is that important. You know what I’m talking about, because everyone knows and understands it:

This powerful game mechanic has begun to show itself within modern games. It has become one of the first and foremost things that game developers think about when creating their masterpieces. Dragon Age: Origins let you pave your way into a busty witch, Cave Story showed some very important rabbit-on-robot intimacy, and Heavy Rain lets you literally play a sex-scene in order to advance the plot very heavily because they put it in the game. Those are merely a handful of games that brought forth this new gaming opiate.

I may be preaching to the choir about this. Why wouldn’t the world know about this new gaming creature? Its pull is so massive that even those who have never touched a videogame in their life know that this must exist in games, or else the fabric of reality would be torn asunder and tossed into the oblivion below to be feasted upon by Number Munchers and Oregon Trail.

I’ve spent long hours wondering what previous games would be like if they incorporated this. Would Princess Peach reward me in a different way when rescuing her? What if there was something else to the two-player co-op in Sonic 2? Were the zombies in Zombies Ate My Neighbors after a different kind of flesh? All of this and more has crossed my mind.

In the end, I realized that I had to do what many game developers should have done long ago. I had to put sex into games that are strongly lacking it. By doing so, they would become immortalized in this vast-growing videogame sex era.

The images in the gallery below I put my blood, sweat, and tears into. I spent years creating them. I had to travel to various places, interview various people, and do enormous amounts of research to bring these into existence. I spent many a night lying awake, my dreams plagued with steaming bodies rocking back and forth, squeaking beds, petroleum-jelly, and that cheese sauce you get with your nachos at Taco Bell usually. But I had to pull through, for the essence of the gaming world depended on it. These images I hold in a very special part of my heart, and I hope they can fall within that place in your heart as well, thus creating an intimate bond between you, the gaming universe, and I.

Traverse the memories of the past and make them anew, for I bring you the face of tomorrow, today.