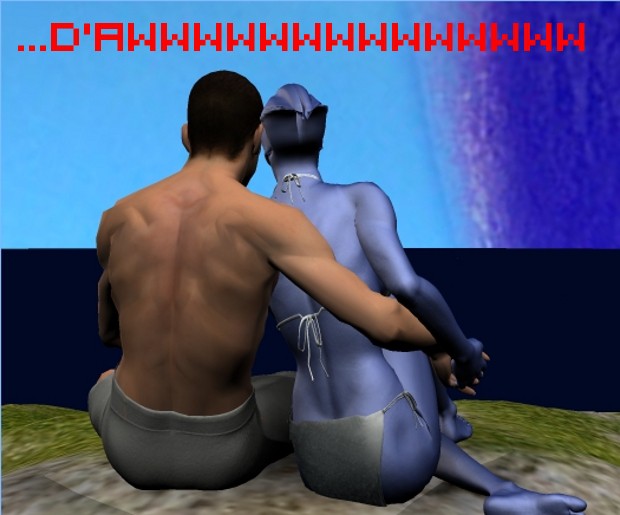 With videogames having been culturally relevant for nearly forty years now, and gaming audiences becoming steadily more difficult to impress, studios have begun to run out of new elements to spice things up and new envelopes to push. Lately, this has led many a developer to address the formerly taboo subject of sexual relations, producing mixed results.

As more and more titles address and include sex, one may find themselves asking, “Why?” That’s a pretty good question, as so far, the meeting of games and sex has been wholly underwhelming.

One of the most popular trends right now, and possibly one of the biggest mistakes, is an attempt to shoehorn sex into game narrative, and in many cases, gameplay. While such attempts were made as far back as games like Beat ‘Em & Eat ‘Em and Custer’s Revenge on the Atari 2600, most games have known better than to attempt in-game sex over the years. Why change now?

The shock factor of button-press intercourse seems to be the primary drive for its inclusion; “hiding” the Hot Coffee mission in GTA: San Andreas, Kratos’ liaisons in the God Of War series, and your little trip to rapeville in Edmund are all amazing examples of sex being thrown into the mix for no good reason beyond garnering press attention and attracting players who want to do something taboo. In a market where free-flying body parts and monsoons of blood have become the norm, ass and titties have become the new way to taunt overprotective parents and the ESRB.

Some may argue that all of these cases lend themselves to their respective game’s stories, and are perfectly justified, but I can’t say I’m convinced. Kratos is out for vengeance against the gods themselves, with the remains of his family imbued in his very flesh, but he still has time to stop and deflower the roses? Really? Edmund could have been portrayed as being just as disturbed by his war experiences in many ways outside of sexual violence. And, while it’s been harped on quite a bit already, the encounter in Heavy Rain is completely out of character and completely unnecessary to the plot.

If anything, the Hot Coffee scenario should have been left in San Andreas, as CJ seems like a dude who would be all about a little action here and there, and the option of intercourse seems much more reasonable in a sandbox environment than a linear plot. Right now, sex is just being crammed into stories for sex’s sake, and is so janky and awkward in most cases that it’s actually hurting the games these scenes are trying to help.

Bioware’s been doing a slightly better job of introducing sex to gameplay, at least in terms of keeping it relevant to story. Both Dragon Age: Origins and Mass Effect 2, the bedroom door is opened, and the player is given a chance to walk through it based on their interactions with the game’s characters. Characters, I might add, who have motivations toward or against the act on their own, motivations that make some sense based on their experiences with the player’s avatar rather than just being tacked on.

The scenes are still clumsy and, honestly, ridiculous, but at least these cases consider sexual relations a consequence of personal interaction, rather than half-assed titillation thrown in to move copies off the shelf. With some refinement, this is the sort of direction I’d rather see in-game sex head, if it really needs to stick around.

Do we really need in-game sex sticking around? Gaming’s done fine without sex taking an active role for years, and even today, some of the best games out there don’t have a lick of sexual content in them. Valve is a shining example of a game company who hasn’t succumbed to the siren’s song of lust in order to produce quality titles; despite having prominent female roles in both Left 4 Deads, Portal, and Half-Life 2, Valve has avoided sexualizing any of them, and any idiot could tell you that none of the titles have suffered for it.

Sure, Alyx, Chell, Zoey, and Rochelle are all at least passingly attractive, but that fact never enters the narrative. Zoey comes off as a kid just trying to survive. Rochelle, when she actually opens her mouth, shows her femininity in a more motherly role than anything else, especially in respect to Ellis, who is like an overgrown child in many respects. Chell, in the rare instances you do see her, romps around in a nondescript orange jumpsuit for the span of her game, and Alyx, while friendly to Gordon Freeman and clearly caring about him, never really comes onto him or uses any sort of feminine wiles to enlist his aid.

Nintendo’s proven themselves perfectly capable of avoiding oversexualization as well, with their iconic Samus Aran. So far removed was sex, both in the activity and gender senses, from the original Metroid, that most players assumed she was a he until the game ending’s big reveal (or a call to Justin Bailey). Even throwing her into a skin-tight blue catsuit and showing us just how much she can let hang out hasn’t taken away from Samus’ legacy of being just as capable and badass as any male character, and players of both genders find it just as easy to fill her shoes without hesitation. I am a bit worried that Team Ninja’s involvement with Other M may change this somewhat, but so far, the trailers have been encouraging.

Clearly, great games don’t need great, good, or even bad sex to get noticed and appreciated. But if a developer can’t help but include sexual content in their titles, the least they could do is give titillation a backseat, passive role. If that role is a humorous one, even better.

Joking about sex is pretty universal in its appeal, as it gives the knowledgeable a chance to wink and nudge, and the less experienced the opening to laugh off any awkwardness. Borderlands, especially in its most recent expansion, springs immediately to mind in this respect, most notably in the curvaceous Mad Moxxi.

Moxxi’s questionable motives, questionable activities, questionable residence (in The Secret Armory Of General Knoxx), questionable dress, questionable genitals, and questionable history all point towards a rather illicit home life, but not once is the player directly confronted with any of it. Rather, sex fits the character and her role on the world of Pandora. It tells you why she knows who and what she does, and provides opportunities for some great lines and jokes, including a well-placed “That’s what SHE said!” at one point. It may even explain what’s up with her son, to some extent.

Sex as humor provided the core basis of Sierra’s rather successful Leisure Suit Larry games, at least up to the point they turned into “play some drinking games without the drinking.” Despite the rather clear motive of getting Larry Laffer laid, the LSL series featured little or no racy content for the bulk of its run. Even having sexuality at the forefront didn’t force the player into anything particularly untoward, and the games weren’t any less fun for that.

What it comes down to is that gamers and developers alike really ought to start asking, more often and more loudly, what place sex actually has in games, and how the industry can get to that place. The rise of sexual content in gaming that is happening right now is the perfect time to set precedents for where game sex might go from here. If titles really do need to have sex in them, the least companies could do is make that sex matter.

And if they can’t make it matter, at least make it interesting.

And if they can’t make it interesting, at least make it so I don’t wake up in the morning, roll over, and ask, “I played that last night?”