“Bayonetta is about making you hard, and that’s all she’s about. There’s no attempt to make her look like some really intelligent, really logical, really powerful female character. She’s just there to give you a boner…maybe that’s not going to further the depiction of women in videogames, but at least its f****** honest.” — Anthony Burch

I don’t know about you, but although there is something factually sad about getting a hard-on for a female gaming-character, there should be something natural about it. I mean, if you are going to fall in love with a set of pixels/polygons, it shouldn’t have to force yourself on every big-breasted, half-naked character you see. If you ever fell in love with a heroine in a novel, that’s because the novelist has fleshed-out (pardon) the woman in her actions, her features and her mannerisms to not only make her believable (or an unbelievable fantasy ideal), but to stir some kind of emotion in the reader.

It’s easier in an image, because the description has now been given form. The only problem that arrives is in interpretation. The artist can give the lust object a completely different form from the intended impression of the slobbering viewer, meaning that she either looks over-whored, ugly or just plainly separate from what roped the viewer in.

Despite the subject of this blog being under this rule also, I feel that her image seems to be more on target amongst every professional artist or fan-made picture with a consistency that outnumbers every bad sketch and half-assed attempt by ten to one. Not only that, but the base back-story and behaviour of Morrigan seems to apply to what Anthony Burch felt was important to him — a sense of honesty that isn’t wrapped up in “girl-power” or some other kind of false excuse. At least, in my opinion.

When the Sega Saturn and Sony PlayStation were about, there was one name on the lips of everyone who found out how to make their penis grow in their teenage years … Lara Croft. For them, they wanted to know where she lived and her bra size. For me, I wanted to know where to get a key to a door in the cave (ahem … ), and how the developers finally realised how to do a great third-person adventure in 3D. I had no interest in her body at all. She didn’t give me an erection no matter how big the boobs became, or how much smoother her skin and form was in the sequels. By all means, I’m not knocking her (wait a minute … ) down completely since it was so obvious that any attempt to make her more respectable stuck out from developer intentions like a boner on a fanboy with tight shorts; she was the icon that proved the British could make a flagship product that would sell like boob-shaped hotcakes. I just wasn’t interested in her.

No, I became infatuated with a videogame character that was less conservative with her intentions. I first saw her picture of her face in Official Sega Saturn Magazine and it was instant ga-ga-mode.

The moment Morrigan appears in the introduction of the game tells you all you need to know about why it would be easy to be infatuated with this character, unless you have a pathological hatred of Japanese drawing-style or a worn patience of RPG advert models that clutter the side of certain web pages. Perfect nose, exotic features, even the strange colour of her hair seems to complement the pale tones of her skin.

Now, it would be really sad if I, because of that picture of the succubus, just simply threw everything down, researched everything about Morrigan and just spent my life doing this messed-up shrine of cut-out magazine photos, fan-fiction and art in the spare room of my house. I simply didn’t. The fact that I am only committing myself now to a proper examination of what she represents (and her connection to sex) after over ten years of first seeing a still of her shows how much self-control I have. Yes, even though I admit to being desperate enough to buy a copy of Darkstalkers to realise too late that a warped disc was to end my Saturn-playing days. 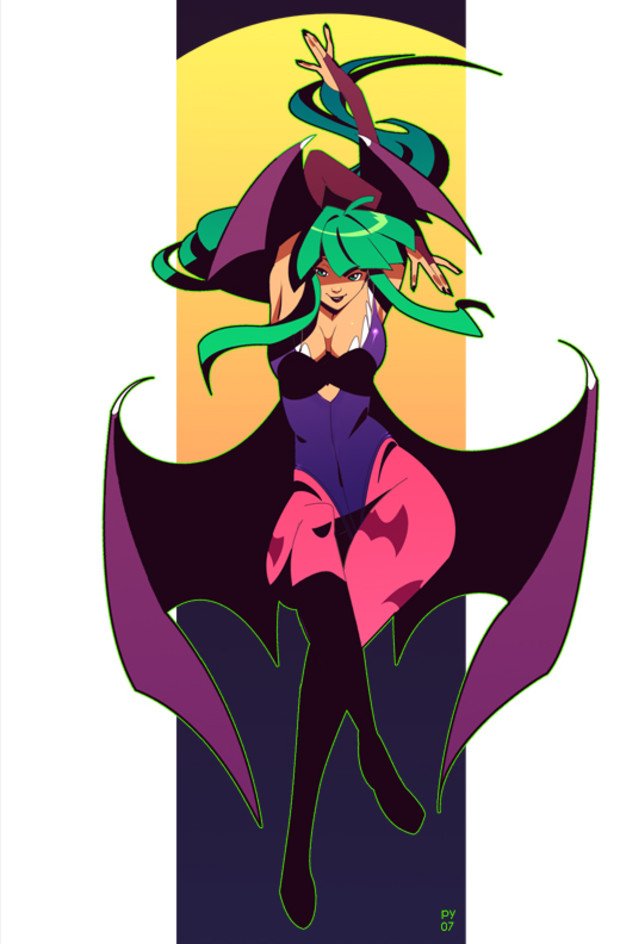 It would be suitable to begin an analysis of the succubus by knowing what a succubus actually is. Anyone with a bit of knowledge of games within the Shin Megami Tensei series will know that it is a mythical creature or demon. A quick look on Wikipedia expands on this, saying “in folklore traced back to medieval legend, a succubus (plural succubi) is a demon who takes the form of a woman to seduce men in dreams to have sexual intercourse. In modern times, a succubus may or may not appear in dreams and is often depicted as highly attractive, while in the past succubi were depicted as frightening and demonic, Succubi draw energy from men to sustain themselves, often until the victim becomes exhausted or dies.

So from the very being that Morrigan is, she is fated to be connected with sex. Whether she likes it or not (and she probably does), she needs it to survive. However, that’s not the only link to mythology, for her first name is linked to a Celtic legend that can turn into different forms and animals, and also is associated with sexual intercourse in multiple tales.

And what of this contemporary figure, then? Well, she ticks the boxes of what she needs to be (sexy and attractive), whilst maintaining that demonic factor with her back and head wings. These wings can change shape and form, helping in either defensive or offensive capabilities. The Morrigan of Celtic origin’s name has been linked to ‘queen’ in some form, and she has duties as a leader. And hell, even her nationality is even confirmed as Scottish on the Wikipedia page!

However, she has a reputation of being moody and this Dark Realm dweller prefers to hop over to Earth for entertainment. This desire for dimension-hopping can be seen when she changes clothing to clubbing attire in her battle victory pose. So far, so fashion model (which parallels Reverent Anthony’s comments on Bayonetta elsewhere in the Rev Rant). 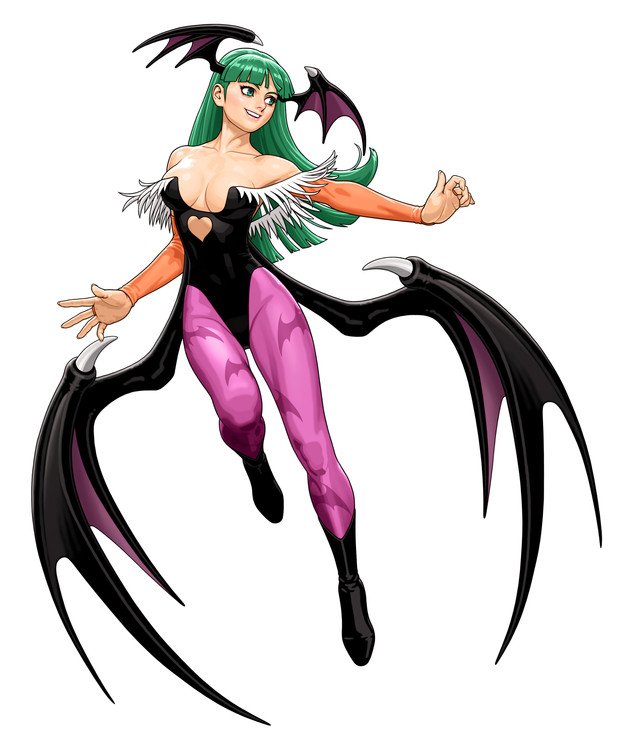 The unusual thing about her unwillingness to put effort into her responsibilities is that it clashes with her capabilities and strengths as a fighter. She’s a damn good fighter too, if she shares similar fireball and dragon-punch moves as street fighter Ryu. Is it her natural ability or magically enhanced? I could have looked at the anime or the comics for references, but that is something I don’t have direct access to, and thus I can’t comment on that.

One thing I can admit to seeing is the succubus scrap in the Darkstalkers games. All of fighters in the game have a tongue-in-cheek style of brawling, and Morrigan is no exception. She can whip her hair as a light punch like some kind of twisted take on a shampoo advert. Her super-jump is a jet-powered launch. Batfink-style wing-defending. Throughout the game, I and a friend had no choice but to chuckle along at the outlandish moves we were pulling on these ghoulish battlers. I couldn’t remember if Morrigan was one of them, but even as I’m too lazy to put a disc into a PlayStation to bother, I still know a little about how she tackles enemies, and that is important. 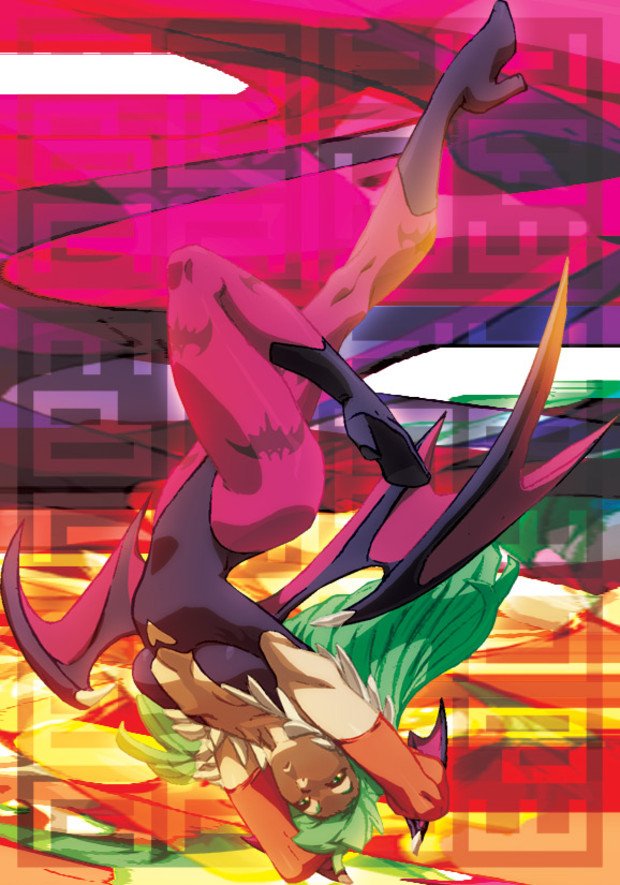 This, though, is a blog that requires its subject to be about sex. Morrigan is one of many videogame females out there that has exaggerated proportions that hold our attention. What makes her any special than the rest of those pin-ups out there? Well, for one thing, her developers did some research into what a succubus was, and built her character around that. The designers and animators at Capcom constructed a list of moves that were to be as silly and funny as well as apt and relevant alongside the rest of the game’s cast. Can you imagine then, how much effort went into making her look so hot, fitting that small torso (with big breasts attached) and long legs into pink tights and black top? She may be a complete fantasy figure, but there is no fake ambition or role to attach to it.

How do I end this without repeating myself like I have above? What possible conclusion can we arrive at? Well, maybe I can refer to the image the rests in the memory of one Topher Cantler. On an episode of the podcast RetroforceGO!, he specifically picks out the picture of Morrigan licking her fingers, bending over towards the foreground, with the earth floating in the background in Marvel vs Capcom. The sheer percentage of images of her against other videogame figures could be like that of the percentage of images of a really hot lesser-known celebrity up against a whole host of Cameron Diazes and Angelina Jolies. The woman you really think is sexy has less exposure than the leading lights, but so what? They may rule this world, but only you know that you’d let Morrigan rule yours. Capcom have been successful enough to take my and Topher’s attention, along with tens and thousands with an effigy of an undead creature connected to sex. Believe me, that’s powerful.

The images that appear in this blog entry are copyrighted by their artists. Do not try to claim them as your own work, or the artists who put their hard work into these will desire vengeance, and any succubi that would get near you will start appearing in your nightmares, rather than your dreams. You have been warned.