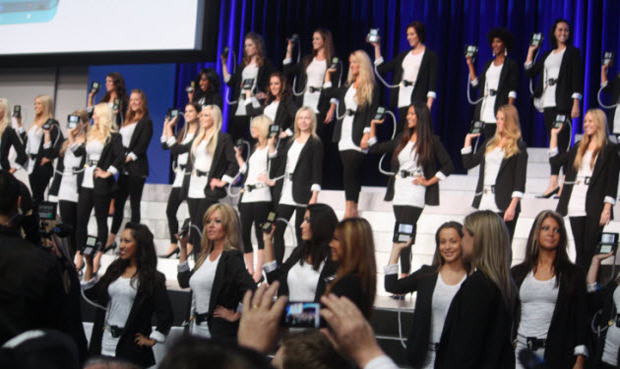 [For her E3 musing, beverlynoelle (who actually got to go to E3, along with naiathegamer) tells us about her experiences with Nintendo’s harem of 3DS girls. Have your own thoughts about E3? There’s still time to post a Musing about it. — JRo]

I’ve started and stopped writing on this post about a million times over the past week. Because it’s taken me so long, it may not be the timeliest E3 post, or the most revelatory, but it covers one of the most standout experiences of the whole event: My time with the 3DS.

First off, the Nintendo press conference was absolutely incredible. It literally left me speechless at some parts (well, unless you count SQUEEEEEEEEE as speech) and I have never been more impressed at a product lineup. I mean…new Metroid, Kirby, Donkey Kong Country, Zelda, Epic Mickey and Kid Icarus?! It was like all my nerd dreams were coming true (well, except for the one where I make out with Sephiroth for hours. But that’s a story for another time). And from the moment Nintendo officially unveiled the 3DS at their press conference, I knew I had to get my hands on one. So, still squee-ing, I hopped in my car with fellow Destructoider Naia, and off we went in search of 3D amazingness.

Hit the jump to read about our adventure. 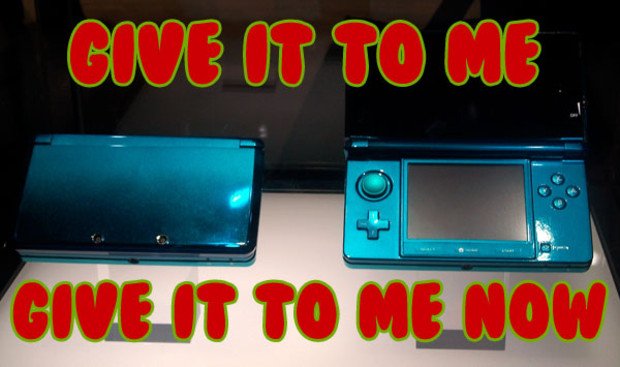 GIVE IT TO ME I NEED IT

So E3 was super crowded and I picked up my press badge and…OK, look, I’m not going to bore you with minutiae; all the prefacing you’re going to need comes from the following statement:

I love booth babes. I’m not going to judge someone unfairly simply because they’re pretty and trying to make a living; furthermore, I’m not going to condemn companies for using any means necessary to get people into their booths (hey, THIS ECONOMY, man). I talked to many of my scantily-clad sisters and they were all charming, knowledgeable, friendly, and helpful. Even the Playboy Playmates Mafia II hired seemed happy to be there and genuinely interested in posing with fans. 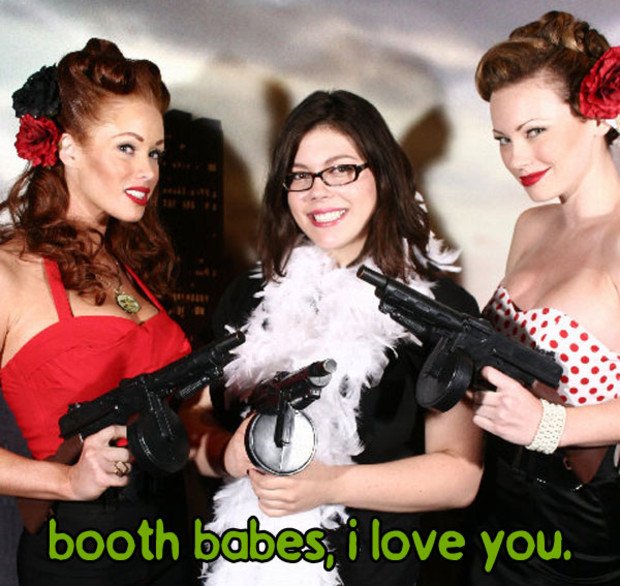 However, there is one notable exception to my booth babe lovin’, and that is Nintendo’s 3DS babes (or, as I like to think of them, living security devices.)

You may have seen them at the press conference: Beautiful women with short skirts, knee-high boots, and tight t-shirts and blazers, with 3DS’ strapped around their waists (ostensibly so people wouldn’t try to run off with one; however, I’m sure many a nerd would gladly take the 3DS and the girl as well). I was deeply conflicted at the press conference; it had been stellar up until the last few minutes when the girls were introduced, so why even include babes at all? It’s not exactly like Nintendo has a reputation for trying to be edgy and XTREEEEME, and yet there they were, promoting their most exciting new technology the same way as Call of Duty. It didn’t exactly seem in sync with Nintendo’s branding, but I kind of laughed it off at the time.

Cue to three hours later, when Naia and I were just about to get our hands on a 3DS for the first time.

Let me back up a little by saying that, yes, immediately following the conference, we stood in line for THREE HOURS to have 10 minutes of play time on a 3DS. (Wouldn’t you?) What was great about the Nintendo booth was that they had company employees going around and showing off the other products announced at the show. Because of this, a really nice Nintendo employee let Dragon Quest fangirl Naia to go through a quest on the new title in the series while we waited. 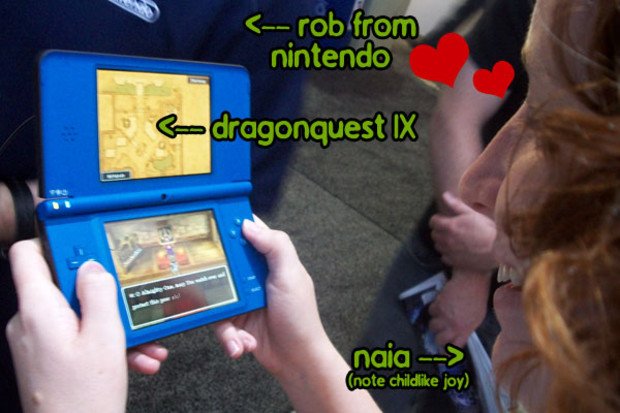 Rob McCullough (the employee demoing the game) was very nice, knowledgeable, friendly and funny (but sorry, ladies and gents, he’s married). He seemed to know a lot about the specific product he was carrying and was savvy enough to make comparisons to other (even—gasp!—non-Nintendo) games. Our interactions with him were very positive and left me more excited than ever to see the 3DS, because if the girls showing them to us were even half as enthusiastic as this guy, it was going to be a mind-blowing experience.

Cut to 2 hours and 59 minutes later when we’re about to touch a 3DS for the first time. Child-like excitement overtook me as they led us into the preview area, where six lines of long tables were laid out with 3DS’ on them, smiling girls sitting directly behind them. Each 3DS had a different preview (movie trailers, game trailers, and game demos) on it so you had to switch stations to see the 3DS’ full capabilities. I immediately beelined for an open station, which had a movie trailer loaded on it. I stood there and the girl attached to this particular 3DS smiled at me.

I nodded, and she continued. “So, you can adjust the 3D like this…”

…and proceeded to fumble around with the screen. She had no idea where the 3D slider was. Finally after a moment she got it (it’s on the right side of the top screen, FYI) and I watched the trailer (which was, like, a kid’s movie with owls or something. Waaaasn’t really paying attention because OMG IT’S IN 3D WHAT IS THIS I DON’T EVEN.) To celebrate another job well done, she then began putting on makeup. (Yes, seriously.)

The fact that the girl couldn’t find the slider was slightly amusing, as she had been demoing the product for 4-5 hours at that point, but I figured maybe someone had called in sick or something and they had to find a gorgeous, stacked girl at the last minute to demo the product.

…yeeeeeah, I think you can tell where this is going.

Naia had the station next to me and was playing Nintendogs and Cats. I asked her how the size compared to her DSi. Since she had her DSi with her, she pulled it out of her bag and held it alongside the 3DS at her station.

Keep in mind that these products look almost exactly the same. They’re the same size; the 3DS top screen is slightly bigger and it has an analog stick instead of the d-pad, and that’s about it. Closed, they look almost identical. So you can probably imagine my confusion when the girl at Naia’s station said this:

Naia paused for a second and said, “It’s a DSi.”

I’m going to give you a moment to process the fact that the DSi and 3DS both have “DS” in the name. That knowledge should adequately cover exactly why the next question the girl asked was so mind-boggling:

Things only went downhill from there. I went to go get my hands on an actual game, something with dinosaurs that lets you face off against one another (kinda like Primal Rage, minus the badassery, but plus ZOMG 3D which more than compensates). Since I hadn’t actually tried a game yet, I was pretty excited.

“Does this game use the stylus? Wait, does this even have a stylus?”

The girl took the 3DS out of my hands, turned it over a few times, then handed it back to me without saying a word. Does it have a stylus? To this day, I have no idea. (Seriously, do you know? SOMEBODY TELL ME!)

The screen said press A to start.

“So you press this to begin…” she says, and starts poking at the screen with her finger (why didn’t she just use the styl…oh, wait.). Needless to say, the game didn’t begin, so she handed it back over to me so I could figure it out. I played the game for a little bit, tore up a stegosaurus with my tiny t-rex arms, then was not-so-gently told by a Nintendo official that our group’s time was up and could we please leave the demo area.

I caught back up with Naia whose last experience with the 3DS was watching a trailer for Kingdom Hearts. The trailer looked great, she said, but she couldn’t tell from watching it whether it was a remake of the first Kingdom Hearts game, or a totally brand new one for the 3DS. So, she asked the girl accompanying the 3DS it was playing on if it was a remake or a new game.

The booth girls’ inability to answer questions about the 3DS was more than just annoying, it was disrespectful. E3 is an event for industry and media; the majority of the people attending are extremely knowledgeable about games. Why Nintendo felt it was OK to replace its regular, intelligent employees (like Rob) with pretty models to demo its most exciting new product is beyond me. Most E3 attendees expect more than just a vacant smile and tight t-shirt, they want to know about the product itself. And it’s not even like we were asking hard-hitting questions; just questions relating to basic functionality and product knowledge. I could maybe understand a bit of ignorance in terms of the heavier technical stuff (like how the 3D works). But basic usage questions should’ve been easily answerable, right? Right?

The thing that I can’t get over is how quickly my excitement over the 3DS turned into borderline rage solely because the people demoing it weren’t doing their job. Nintendo and the 3DS would’ve been better served by having cute puppies chained to the product.

At least we don’t expect puppies to answer questions other than “Where’s Mr. Squeakers?!” and “Do you have to go outsi…NO NOT AGAIN HOW MANY TIMES DO I HAVE TO TELL YOU?”

Even after waiting in line for hours, I was still excited about the 3DS. But then, after ten minutes of hands-on time with completely disinterested booth babes…it kind of killed the buzz, you know? I actually felt disrespected by Nintendo. The fact that they left their most important new technology in the hands of people who knew next to nothing about it solely because they were attractive really left a bad taste in my mouth, because that’s not what we’ve come to expect from Nintendo. Nintendo has always signified quality, innovation and intelligence to me…and in all of their other demonstrations, those qualities were exemplified by their employees.

I just can’t believe that they would make an exception to those standards for the people in charge of the most important new tech from the show. Because of that, my experience with the 3DS was by far the most disappointing of the whole show. (And I even played the Glee karaoke game.)