As popular as the Switch is, there isn’t a single traditional MMO experience available for the console on these shores. While it makes some kind of sense in that portable mode conflicts with the always online requirement MMO’s have, not everyone plays their Switch exclusively on the go. The hybrid nature of the device was chosen specifically to have full console experiences on there, so why not adapt a free-to-play MMO for the system?

The wait for such a game will soon be coming to an end. Last month, Daybreak Games announced that DC Universe Online will be heading to the Switch with nearly 10 years worth of content in tow. A massive undertaking, the biggest question about this new port is how it runs. Third-party ports don’t always end up that great on Nintendo’s little device and playing an MMO at 15 FPS doesn’t sound like something anyone would want to endure.

You can put your fears to bed: DC Universe Online runs perfectly fine on Switch. It won’t blow your mind with blistering fast framerates, but this is a more than adequate port of a resource heavy MMO, on a system that arguably shouldn’t be able to run it.

For my demo session, I got to sit down with DCUO’s creative director SJ Mueller and executive producer Leah Bowers to tinker around in the city of Metropolis. My session was shared with a fellow reporter, and while they were asking questions and getting some capture, I battled thugs with SJ and got a crash course in how everything worked. Having not touched DCUO at all in the past, I was quite surprised at how well the UI was laid out for gamepads.

As with most MMOs, you’ll be attacking things in a pseudo-action manner with special abilities mapped to hotkeys. Since modern gamepads don’t have the same number of buttons as a computer keyboard, this tends to be a big problem in console MMOs. DC Universe Online tackles this by having you hold ZL or ZR to access two different shortcut menus. It works very elegantly and was easy for me to pick up without any explanation.

As I was discovering all of this, I got some background on what has changed with the title throughout the years. DCUO is currently on its 34th episode pack. Episode packs are small, paid expansions that bring new content to the game in an ever growing manner. If you opt for the free-to-play version of the title (of which each platform hosts), you’re given access to the latest pack while older ones appear in rotation. Considering the size of some of these environments, that really isn’t a bad deal. You could explore the slums of Gotham for hours on end and still not see everything, for instance. 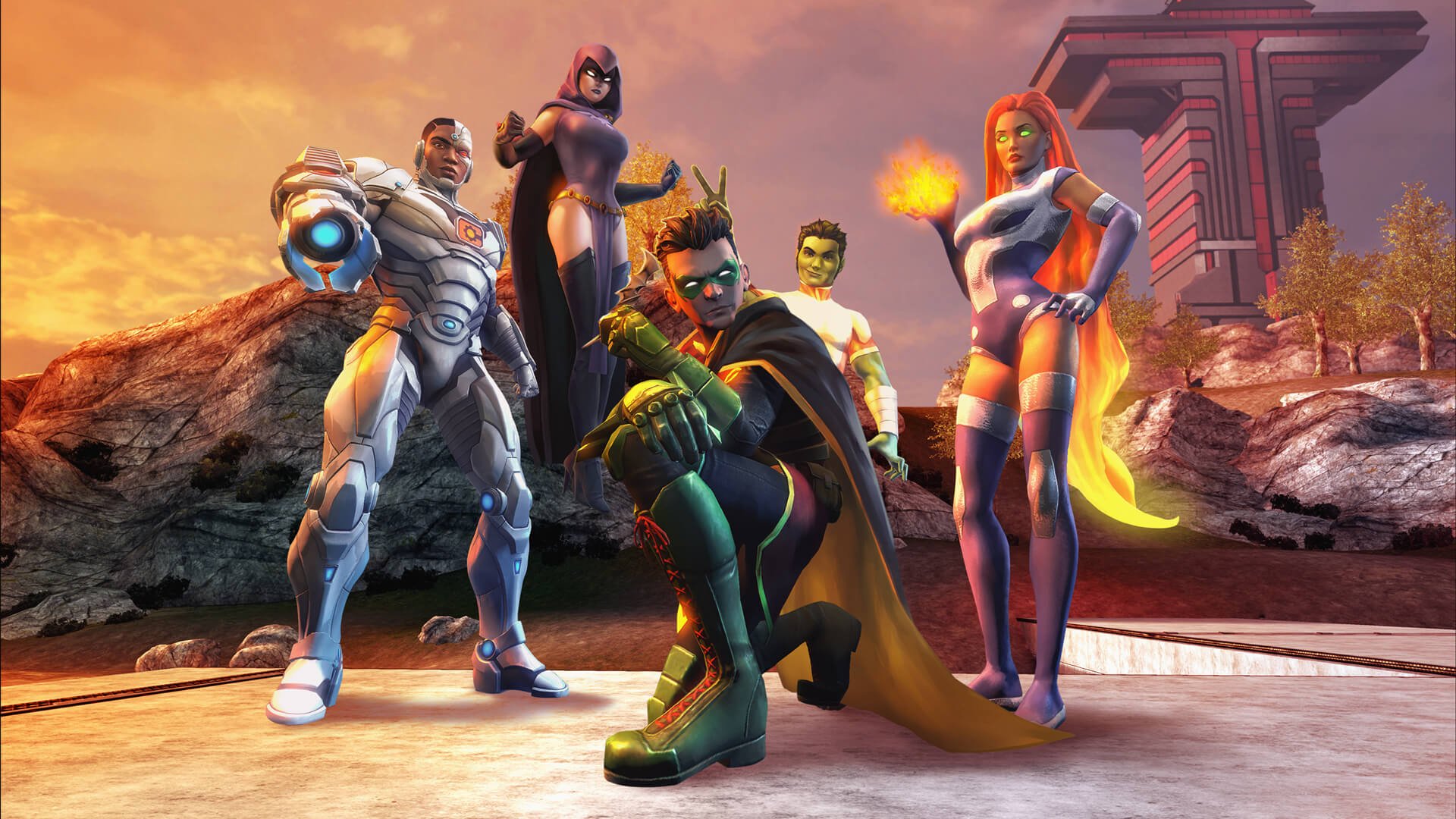 The biggest challenge for the team was getting Aquaman’s homestead of Atlantis running on Switch. While the game isn’t sporting what I’d consider “next-gen” visuals, it looks decent enough for how large the scale of everything is. Environments have a lot of minute details in them, so I can only imagine how obscenely detailed Atlantis may be.

Even without seeing that specific area, we did end up in the middle of Metropolis in what could be considered a recreation of Times Square. There were billboards, massive buildings, tons of vehicles, destructible objects on the road, and a crap ton of enemies flying about. The Switch didn’t buckle under all of that. SJ took the reins on a docked unit while I was checking out the portable version and I couldn’t spot many FPS dips.

There was nary a hint of lag, which is impressive for how quaint the WiFi situation was. We were connected using the hotel’s wireless solution, which could best be described as lacking. Somehow, DCUO ran without a hitch. I didn’t suffer a single disconnect and Daybreak’s QA guy was even able to shift us around in real time with only a few seconds wait. Whatever kind of magic is going on, Nintendo’s typically lousy internet solution isn’t holding DCUO back. 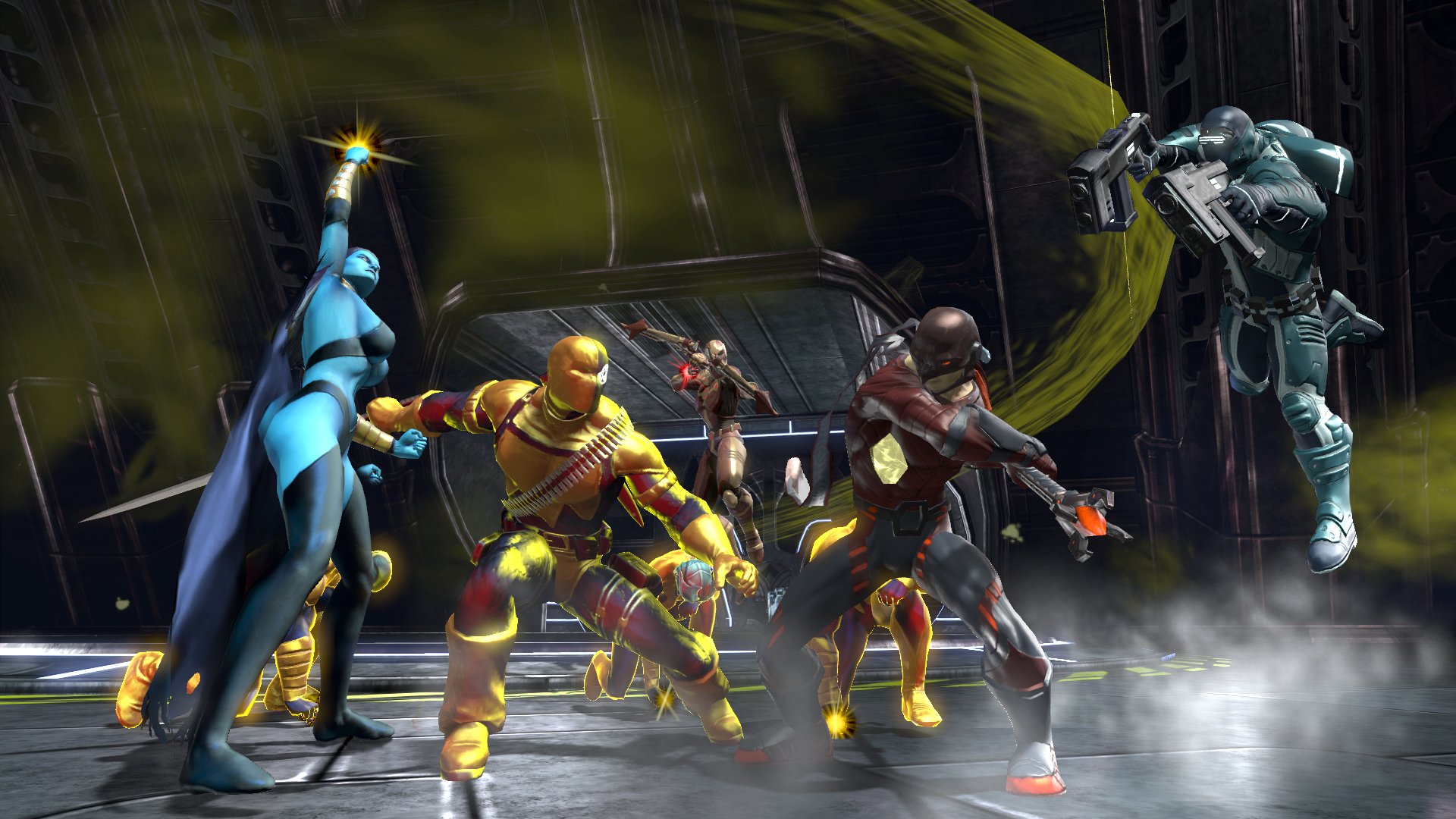 A lot of quality-of-life changes were also present in this demo build. The HUD’s mini-map now features quest markers with indicators for height in the environment. You can also lay down your own blips to guide you, though your companions won’t see those. Chat can be managed with quick, pre-determined responses or the Switch’s keyboard (which does function with touchscreen in portable play). A radial menu for accessing all of the various sub-menus is neat, as well, making it a breeze to swap to the map in only two button presses. About the only thing missing is cross-play, though SJ explained it was more to do with balancing this new version and preventing veterans from steamrolling the game at launch.

Honestly, this felt like the perfect way to experience DC Universe Online. I’m surprised at how well an MMO experience can translate to Nintendo’s console. While the performance can always go higher on another platform, it didn’t feel like I was being shortchanged here. The game doesn’t render at native 1080p (it display 800p docked and 612p in handheld), but that’s honestly not too important. Everything from the big console versions is here and it plays well.

There isn’t a final confirmation of how large the game will be (it has constant updates and a ton of content), but Daybreak recommends that Switch players get an SD card. No physical version will be produced, though that is also true of the other console versions (PS3 was the only one to receive a disc). DC Universe Online should be hitting the eShop this summer.