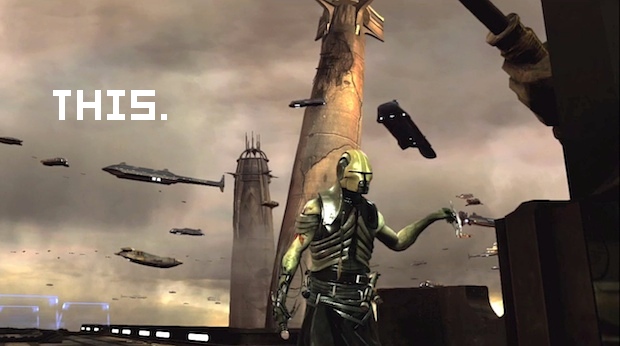 The reveal of Star Wars: The Force Unleashed II shocked me, but not for the obvious reason. In the teaser’s fleeting seconds I realized I didn’t bother with the original game despite its reception. Bad mambo. Missing a big release like that is akin to being stuck on a hospital toilet while your baby is born — it stinks and you never quite live it down.

That bad toilet-related feeling hasn’t retreated since I’ve played it.

Why? Because The Force Unleashed is not a good game. I’d rather grind a grater across my breast than fight Vader or that f’ing electric ATAT another time. And that’s not to mention the various puddles of bile I can spill over the manic difficulty and pacing, the flat characters and the environmental retreads, the dumb menus and the Tusken Raider moral choice.

As bad as it is, there are some key mechanics and ideas that should carry over to the next iteration of the series. But there’s a lot of stuff that just needs to be changed.

The nature of this type of thinking is that I must exclude everything that is good about the game. And there are some great ideas and components that do pan out. The foremost on my mind is the strength of the overall story. It had typical Star Wars stuff, but the slight twist and wrinkle that I injected into the known fiction titillated me — killing Vader is sort of a big deal. Outside of that, I enjoyed the option to fuss with character skins, tweak individual powers and then use them with sensible and superb controls, as well as the variety of environments traversed.

With that said, let’s move on to what some of my Twitter followers said they would change about the game.

@ikiryou – get rid of the platforming sections or make Starkiller glide over them. He’s a Sith appr., not S. Belmont.

@davebell3 – More automation in some of the higher powers. Direct control over the force powers is great, but auto aim would be good too.

@Coonskin – The very beginning of the Death Star, where you’re dropped in a wide open space with a shitton of enemies. Not fun at all.

@adamerse – A better menu system. Waiting a minute or two to switch between menus was painful.

@HavocFang – I’d like it if it had a less linear mission system. And a room where you could spawn enemies and objects to just mess about with.

@PenKaizen – I would have included more spaceship exploration and no bullshit alien planets. And no “Force Immune” AI.

Great thoughts all around.

With the sequel on the horizon, which we’ll assume features Starkiller and focuses on moral choices and positive changes to the core mechanics, there’s a good chance the next will be better. But that doesn’t eliminate the point of this little activity: what would you change about The Force Unleashed?