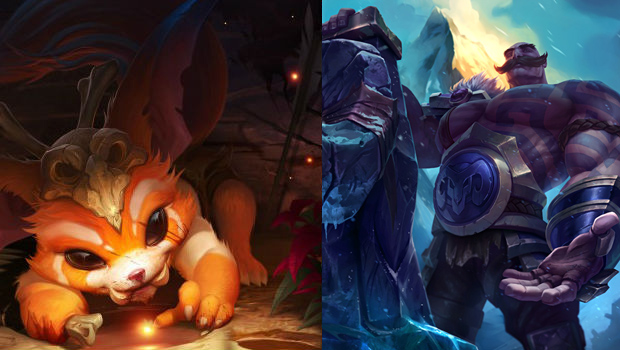 I’ve been covering every new League of Legends champion for over a year now, but ever since Braum dropped, I haven’t had the chance to really get in and play as many ranked games as I would have liked due to a few other obligations.

But what better time to get back in than the release of Gnar, a new adorable champion that looks like he came straight out of a Disney movie (just like Fizz!). Here’s some quick thoughts on the pair.

Braum is the latest mustachioed hero to hit League of Legends, and his design fits the game perfectly. Although his “dragonslayer” skin isn’t really worth buying, his standard skin is one of the stronger models in League, and the fact that he uses his giant shield as a weapon is hilarious.

Braum’s moves are straightforward — he has a slowing projectile, a shield dash (just like a few other support characters), a blocking ability, and a straight-line pop-up ultimate. On paper, all of these powers have been seen before, but in tandem, they all meld very well. A lot of people prefer to play as a carry for more glory by way of kills, but I think it’s incredibly satisfying to set up teammates with kills instead. Braum has a lot of tools in his shed, including his passive stun, his Q slow, and his ultimate pop-up.

One of my favorite new things in League is dashing towards a teammate with Braum’s W, then putting up his E shield to block an incoming attack that would hit multiple players. Braum is a true support character, and definitely a fun addition to the game — it helps to play him with friends though, rather than random people who may not gel with the support type.

Having said that, I wouldn’t expect a whole lot from Braum in terms of originality — especially after seeing what Gnar brings to the table. I’d only recommend him to support junkies.

Gnar is a unique champion, and one that I fell in love with after my first game with him. Billed as a yordle that was born a “millennia ago,” Gnar was frozen in ice, and has a passive “Rage Gene” that allows him to transform into a giant beast. The catch: “rage” is the key word here, as he gains power by way of a separate bar to transform into said beast — and he can’t really control when the transformation takes place (although you’ll see the bar approach 100/100 and you’ll get a transformation imminent animation).

As such, you’ll have access to a Jekyll and Hyde character of sorts, one who is super fast but fragile, and the other who is slow but tanky. Gnar’s standard form is quick, allowing constant speed boosts and even a “hop” move that lets him escape and pursue. His boomerang power is one of my favorite skillshots, as it allows him to “catch” the projectile to shorten the cooldown, or let it run to potentially hit more enemies. It’s perfect for laning and harassing — since it slows the first enemy it touches.

The “Mega” version of Gnar has access to similar moves, but instead of a swift boomerang and an agile hop, he throws boulders and slams the ground. It’s really fun to do well as the tiny version, then all of a sudden have access to Mega Gnar, run in, and wreck shop with all your new cooldowns. That’s not to say that he’s easy to play, as any player can run down the tiny Gnar (which you’ll be playing as most of the time) and slice him to bits in seconds.

You have to play conservatively and run in at the right times, sometimes with split-second decisions in tow, which makes Gnar a really fun champion to play, and a great unpredictable addition to League of Legends. He’s also easy to pick up at first since his core form has two passive-like skills — so you only really have to master his hop and boomerang initially.