Last night, I had the pleasure of attending the Halo 3 beta party in San Fransisco along with Summa and Husky Hog. I have to say, Microsoft and Bungie know how to throw a good party (OPEN BAR!).

Before I go into my thoughts on Halo 3, I want to say that I absolutely love the Halo universe. I’ve played countless hours of Halo 2 online, read all of the books, engrossed myself into I Love Bees and if I had the cash, would have bought a custom fitted MJOLNIR armor suit for myself by now.

So when I say I wasn’t really wowed with the Halo 3 beta, don’t take it as Halo hate.

The over all formula hasn’t changed much from Halo 2 multiplayer. Which isn’t a bad thing at all, mind you, and shouldn’t be a surprise. The biggest change from the previous game is the equipment weapons. Only four were playable during the beta (Bubble Shield, Power Drainer, Trip Mine and Grav lift), but I’m hoping there will be a lot more in the final game. Otherwise, this is a really dull “revolutionary” feature.

The story line is where I’m expecting Bungie to completely wow everyone. I love killing and insulting other gamers online as much as the next guy, but the story line is one of the most important aspect of a game to me. I want to take control of the Master Chief again and fight off the Covenant invasion along side the Elites. I’ve never been so engaged in any kind of fictional story line before. Needless to say, I want to finish the fight.

Out of everything from the beta experience, I was really interested with how the weapons were now:

Needlers: Four to six needles and you’re dead. Nice to see that this will be an actual good weapon now, though you can’t dual wield it anymore.

Assault Rifle: It’s back and better than before. Never touching the SMGs again.

Missile Pods: The human answer to the Brute Shot. The only saving grace for this to me is the homing missiles. Otherwise, I hate it. I don’t like that you go into third person view and that it makes you slow as hell. By the way, you can still jump around several feet in the air while equipped with this, which makes no sense. And you can’t keep it as a secondary weapon. You have to drop it when  switching guns. This also applies to the Chain/Turret  gun.

Brute Shot: Holds up to six grenades now instead of four in one clip.

Plasma Pistol: Still the same, but now you can throw grenades while holding a plasma charge.

Grenades: You don’t throw like a girl anymore! I hated how the grenades went from you being able to throw it across the entire map (Halo 1) to how it was in Halo 2. My excitement was short lived. Grenades seemed to be much weaker now, especially the Plasma Grenade.

Spartan Laser: Takes awhile to get used to. You have to hold the trigger down for five seconds before the laser will fire.

All of the other weapons felt more or less the same.

Of course, this is all just the beta so a lot of things can change from now until the end of the year. 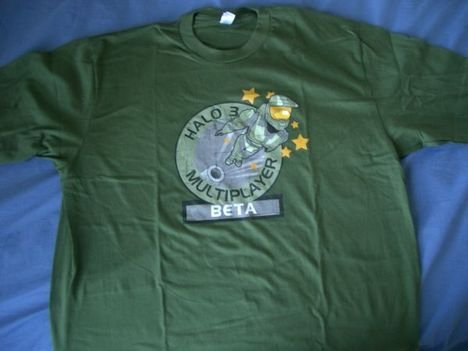