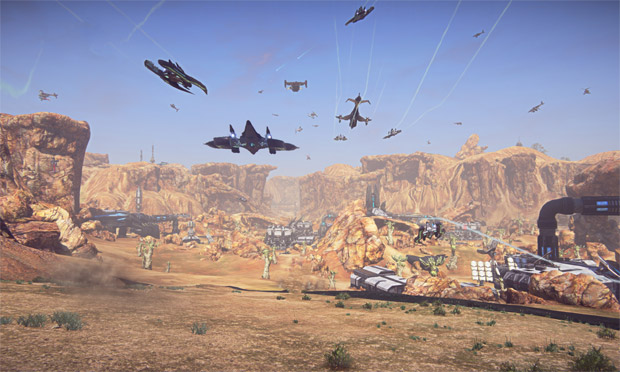 The company ‘can easily pump out new MMOs in the future’

Even if you haven’t played PlanetSide 2, the sheer scale of it all matched with the visual fidelity is fairly impressive. Of course, it helps that there is a good game to back up the MMO’s looks. The engine that made PS2 possible is called ForgeLight, and Sony Online Entertainment will understandably be using it for future MMOs going forward.

“Every internal product that we make from here on out will use ForgeLight,” senior art director Tramell Isaac said to Shacknews. “We can put 2000 people on a server, and we can have all those guys running at 60fps. We can have upwards of 200 on screen at one time. You can’t do that with any other MMO, period. You just can’t do that. Then on top of that, you can do it with visual fidelity that’s comparable with any other first person shooter out there.”

Through this consistency, the company “can easily pump out new MMOs in the future,” which doesn’t sound like a good thing when phrased as such, but I know what he means. Isaac also stated that “The engine can be dialed down back to wherever we want to put it,” meaning the average player won’t necessarily need a cutting-edge machine to run SOE’s titles. “[…] that’s the choice of the development team. It can be dialed back any way we want to.”