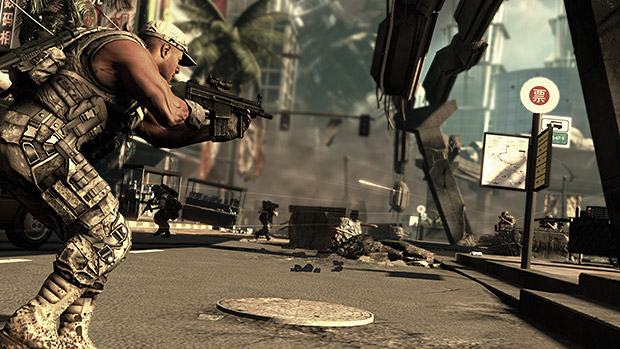 Zipper Interactive is modernizing the tactical shooter with SOCOM 4. Designer Ben Jones summed up the accessibility-oriented changes — which include regenerating health and a cover system — as “the evolution of the SOCOM franchise.” Of course, change can be scary for longtime fans; many SOCOM die-hards are already dismissing this game as a dumbed-down “SOCoD” (for Call of Duty).

But fear not: the multiplayer component of SOCOM 4 will offer two ways to play. Gamers who are new to the series will likely stick with the “standard” setup, which includes the changes that Zipper has made to the way SOCOM plays. And for old-timers, “classic” gameplay is also available. There’s no regenerating health and no cover — the game plays just like the PS2 SOCOM titles. Depending on the gametype, matches can be as small as four-on-four or as large as 16-on-16.

In fact, your SOCOM 4 multiplayer experience will be fully customizable. There’s a wide array of options to mess with in custom private games, which reminds me of good ol’ “Slappers Only” matches in Perfect Dark. And Zipper will be tracking all of the games that people play, so if the developers notice that a particular setup is popular among custom games, they have the ability to turn those custom games into ranked games, which will allow players to earn experience points in them.

I guess this is part of the reason why Jones called SOCOM 4 “the real first SOCOM on the PS3.” If you want to try it yourself, the game comes out on April 19th, but you can gain access to the upcoming multiplayer beta by buying specially marked copies of Killzone 3.