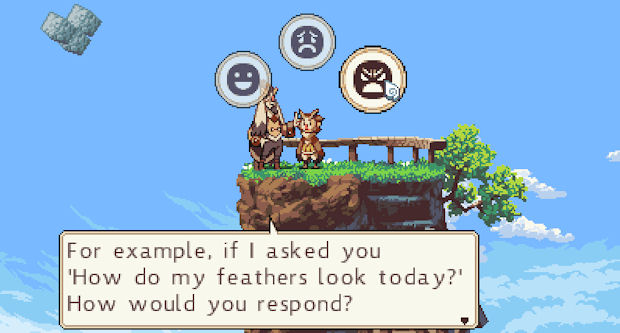 In case you’ve forgotten (it’s been a while), Owl Boy is a terrific looking indie platformer from D-Pad Studio, dripping in retro flavor and set in a unique and interesting world. We had an exclusive trailer a few months back, but that was the last thing anybody ever saw of the planned PC and Xbox 360 game.

Curious and concerned, Destructoid contacted D-Pad studio to find out what had become of Owl Boy. We were informed that the game was still in development, but that the situation had been somewhat troublesome and frustrating.

“Our main programmer, Blake, timed out of the project because of work about half a year ago,” explain’s D-Pad’s Simon Andersen. “We were in need of a new programmer but after sorting through the truckloads of people that showed up for the beta-testing and never returned afterwards, we decided to keep the search internal to avoid getting a slew of applicants that weren’t serious.

“We eventually found a replacement, but progress was slow and it eventually became clear we needed to find someone new. Another replacement was found but after another grueling training phase things stopped completely. After this, I’ve been desperately trying to find someone to help out with the project, and to be honest, I’m almost at my wits end. The last option that’s left is going for a public call out for a replacement, but it’s going to be hell sorting through applicants without my programmer around to check if they’re actually up to par, so it’s not really ideal. I’m not one to complain about things in public, so I’ve avoided dragging the audience into this issue, though maybe we should have.”

The game has been submitted to the IGF festival in San Francisco, but currently lacks programmer backing, leading to a demo that Andersen admits he is “embarrassed” by. Despite the setbacks, Andersen says his team is not giving up now after six months of wrestling, and that a mountain of content is begging to be shown off as soon as it’s ready.

“We will complete Owl Boy,” declares Andersen. “It’s just a question of when.”