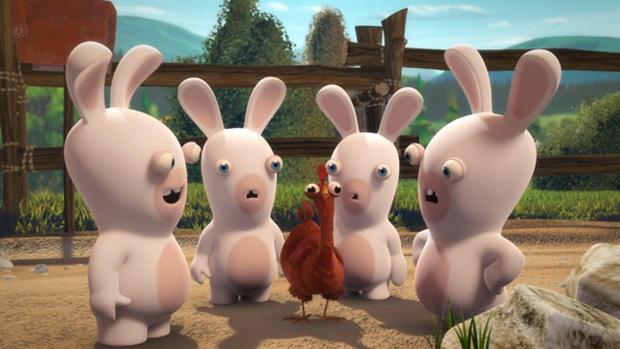 Today, Nickelodeon launched the latest show on its Saturday morning lineup: Rabbids Invasion. Teased about for years, the new program is about… the Rabbids, and they do… things. Ummmm… yeah, that’s basically the gist of it.

I happened across Rabbids Invasion by accident as I was flipping channels this morning. It consists of three short segments in a half-hour block; each segment involves the little Rayman spotlight stealers getting into mischief, while a second and third plot thread runs concurrent with their shenanigans. For example in one short, the Rabbids are throwing starfish at each other on the beach, a beach shop owner forces her husband to clean the windows before he goes fishing, and a criminal is trying to escape police pursuit in a stolen car. Now and then, a stray thrown starfish results in the man having to wash the windows again, and eventually a squid lands on the criminal’s windshield thus causing him to crash into the shop.

All the segments follow this same pattern. The Rabbids do their own thing, completely oblivious that their actions affect others nearby. It could have worked out, but the Rabbids are such one-note characters that the joke wears out before a segment is even over. They do something dumb, one of them goes “BWAAAAH,” the rest laugh, rinse, and repeat. One episode in and the creativity well already feels tapped out.

Look, I liked the Rabbids back when they were first introduced. I thought the commercials and minute-long shorts were a riot. But c’mon! That was seven years ago! Time has demonstrated that they haven’t really grown over the years. And now Ubisoft is trying to stretch their antics to fill a half-hour slot?

Maybe the kids will like it, though. This summer saw the release of Despicable Me 2, and with it the return of the Minions. If you haven’t seen either this film or its predecessor, the Minions are essentially a cross between the Rabbids and Mega Man Legends‘ Servbots. They assist the main character Gru in his various schemes, and they appear alone various scenes speaking gibberish and acting like goofballs, much like Rabbids. They’ve easily supplanted Gru as the star of the movies, and I’m thinking that a TV show that offers the same brand of humor with similar characters could be a hit with the younger set. Then again, maybe kids would rather see an actual “Minions” TV show instead.

I can’t accurately judge what kids will enjoy anymore, but as someone whose television diet consists almost entirely of cartoons, I’d like to think I have an eye for when a show is being genuine or when it’s trying to appeal to children’s basest desires without having much substance of its own. From what I’ve seen so far, Rabbids Invasion is so lacking in substance that it boggles my mind how the creators will fill out a 26-episode season.

Then there is Pac-Man and the Ghostly Adventures on Disney XD, which launched back in June. This isn’t Pac-Man’s first journey into animation, but it’s definitely his most bizarre and may actually go a little too overboard on the new substance. It reminds me of the old days of game-to-TV adaptations where studios had to essentially build the world on their own because the games were so sparse.

Look at it! It’s just… wow. I don’t quite know what to say. Commendable effort, I guess? It’s certainly not terrible, but it feels weird how Namco Bandai is trying so hard to make Pac-Man a popular character again that it is willing to completely overhaul the whole Pac-Man to such extremes. I can confidently say that the show will at least be better than its tie-in videogame.

My verdict: Rabbids Invasion, bad; Pac-Man and the Ghostly Adventures, s’alright. Such is the nature of cross-media promotion. Give them both a viewing and judge for yourself.