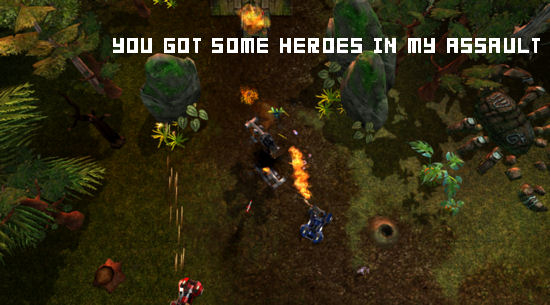 If there’s one game that’s forever been on my “download the full version” list of XBLA games, it’s Assault Heroes. I don’t bemoan the occasional arcade shooter, and Assault Heroes had giant robotic bugs, so there was very little to dislike. Sadly, however, time has crept up on me, and I don’t have much of it before Assault Heroes 2 causes the former to become obsolete.

Coming to the Arcade in spring, Assault Heroes 2 takes the player into space and will grant you the abilities to hijack enemy vehicles this time around. Grand Theft Assault Heroes … In Space sounds like some good old fashioned fun if you ask me.

Hit the jump for the press release, and check out the screens below.

Sierra Online, a division of Vivendi Games, will soon unleash Assault Heroes 2, the sequel to IGN.com’s 2006 Xbox LIVE Arcade game of the year, for Xbox LIVE Arcade for the Xbox 360 video game and entertainment system from Microsoft. Re-imagined for an even more intense arcade shooter experience, the Assault Heroes 2 game expands its horizons into outer space. New features include hi-jackable enemy vehicles, many more levels and an enhanced co-operative gameplay mode.

Developed by Wanako Studios, the Assault Heroes 2 game will be available on Xbox LIVE® Marketplace for the Xbox 360® video game and entertainment system this spring.