Yes, I hate the name too

As I said I would do in my gaming resolution, I’ve been spending a lot of time recently with mobile games, looking for those fun experiences I think should be shared with people who are actually looking for games to play on their phones. On my old iPhone, I had around 25 games, but spend most of my downtime trying to get a high score in Crossy Road. For a game I played only one or two minutes at a time, I probably sunk around 10 hours into it. It is fun, it’s easy to play, it’s what Konami should have done with Frogger, and it’s no longer my go-to toilet time game now that I’ve discovered Westy West.

Currently in Android Early Access and slated for official release later this year, Westy West follows in the footsteps of Crossy Road and similar games like Totes the Goat and Shooty Skies. With its simple swipe controls and fun aesthetic, I keep coming back to this free-to-play app whenever I have a moment or two, or when I’m forced to stand on the train. Like the aforementioned games, Westy West has an extremely agreeable microtransaction plan that allows you to pay upfront for new characters or spend the currency you earn in game. 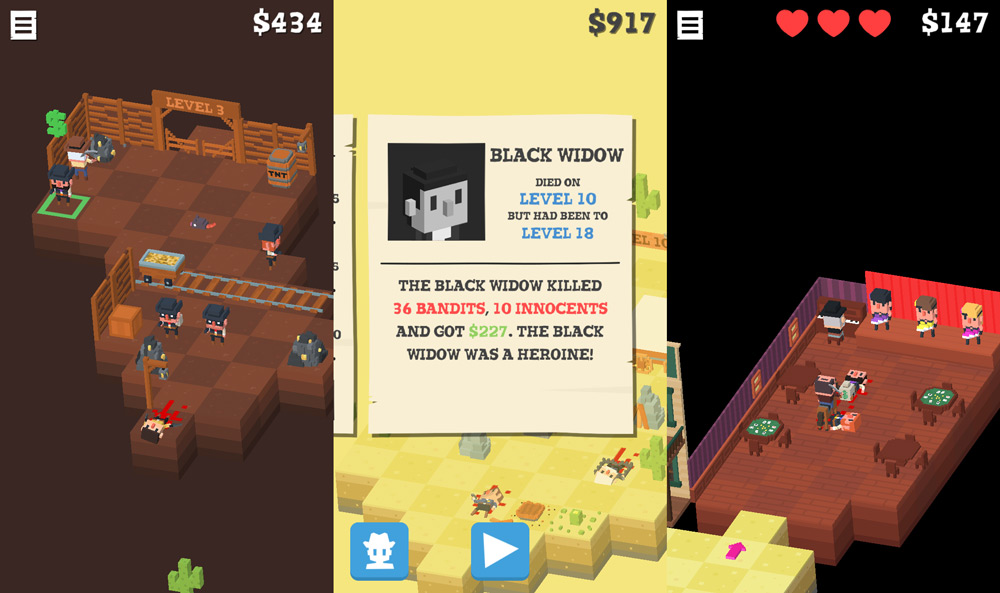 For me, the element that elevates Westy West above similar apps is the exploration aspect, however limited it is. Each level is a small set of challenges, obstacles, and enemies you have to overcome, but there is also an opportunity to explore. Levels have banks, gun shops, and saloons you can enter, complete with customers and dancing girls. There are also buildings for hotels, butcher shops, post offices and more that you currently can’t enter, but hopefully, that will change for the full release.

There are also consequences for your actions. Shooting an innocent person will raise your wanted rating. Get it too high and the calvary will be on your tail. Shoot the piano player in the saloon and the girls will stop dancing. These are all nice touches that help add to the feeling that what I’m playing is a “real” game instead of some time-waster app (not that there’s anything wrong with being a time-waster app).

I’ve experienced a few bugs, crashes and other problems one tends to expect with early access and I assume some of those issues could be caused by my generally weak Galaxy Amp Prime phone. Also, the melee weapons here really need to be rethought because they really don’t stand a chance against a gun.

Maybe I’m making too much out of this app, but I’m impressed and I think what I like most about it is the potential it shows for the genre. The simple swipe and move one step controls easily works for endless procedurally generated levels, for smaller arcade-style levels and now for levels that allow for a bit of exploration. I want to see someone take this concept all the way and make a full blown adventure game in the style of Westy West. Do away with these procedurally generated stages and give us a hand-crafted experience.