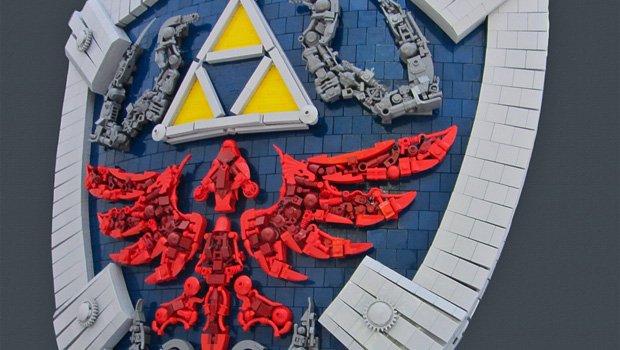 I once dabbled in building custom LEGO models many years ago. I made an Arwing and Wolfen from Star Fox 64, and as proud as I was of them, they were the blockiest damn things you’ve ever seen. I have nothing but the utmost respect for folks who can turn those studded hunks of plastic into masterworks.

Speaking of masterworks, have you seen this 28″-high Hylian shield by modeler Remi Gagne? Designed after the shield’s Twilight Princess incarnation, over $1500 worth of bricks were used in its construction. Detailed emblems, a belt strap to fasten it to your arm, a display stand — this shield has it all. It probably couldn’t even deflect a single arrow without crumbling apart, but why would you want to use it in combat to begin with?

Both Remi and his wife Alyse have quite the impressive resume. Alyse made this beautiful The Wind Waker “stained glass” mosaic, while the pair — as part of the OneLug building group — constructed the ridiculous Orthanc tower from The Lord of the Rings. Quite seriously, we are not worthy.