Publisher SNK has spilled the beans on its new arcade stick hardware, which it first revealed to the public last week. The Neo Geo Arcade Stick Pro is a multi-function device for use with PC, TV via HDMI, or SNK’s own cutesy console, the Neo Geo Mini.

Set in “Joystick Mode” the Arcade Stick Pro can be used to give tighter, more authentic control when used with the Neo Geo Mini, or can be used as a USB arcade stick for PC. It stands to reason that it will be compatible with all games, as it has a right button design, with Neo Geo fighters only requiring four. 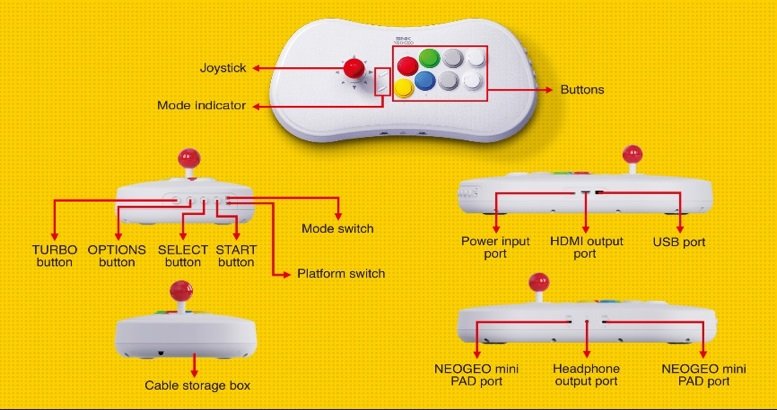 In “Console Mode”, the Arcade Stick Pro can be connected to a TV via HDMI, with the stick itself pre-loaded with 20 Neo Geo classics (although these titles are yet to be revealed). A second Arcade Stick Pro, or the Neo Geo Mini Pad Controller, can be daisy-chained to the stick – like it’s an Atari Lynx – to allow for two-player action.

The Arcade Stick Pro features programmable controls, turbo buttons and a headphone jack. I’ll be honest, I think it looks a bit gimmicky, and it’s strange to see it sold as a controller for the Neo Geo Mini, but that it also has its own pre-loaded games. It also appears to have a power source input, which raises an eyebrow. I guess this is a necessary requirement when using the stick with a TV.

More details on the Neo Geo Arcade Stick Pro – including game listing, price and release date – are expected from SNK in the near future.