It took me a few minutes to wrap my head around Snake Pass. The 3D platformer seems to have all the trappings of a golden era Rare joint. From enchanting environments, right down to a duo of goofy-looking animal heroes, almost every part of Sumo Digital’s upcoming game is reminiscent of a genre that’s not only admired, but also poised to make a big comeback in 2017.

But Snake Pass‘ defining feature isn’t just that it looks like a modern-day Nintendo 64 platformer. Instead, it’s the lack of a proper jump button that makes it stand out. By leaning into the game’s serpentine inspiration, Sumo Digital has created a platformer that excels by mechanical subtraction, not by relying on genre familiarity and nostalgia.

I recently sat down with Sumo Digital and played through one of Snake Pass‘ early levels. I wasn’t sure what to expect at first, but I found out quickly that while the “snakeformer” has an initial learning curve, slithering around is way more intuitive than it has any right to be.

The main reason that playing a 3D platformer without a dedicated jump button takes some getting used to is the fact that Noodle, Snake Pass‘ main character, controls more like a Mack Truck than a Mario. To move forward, I had to hold R2 while snaking the left analog stick upwards in a reverse “S” motion. It’s a bit jarring compared to the feeling of total control that comes with most platformers, honestly, but the serpentine movement makes sense given you’re playing as a character who literally has no legs. 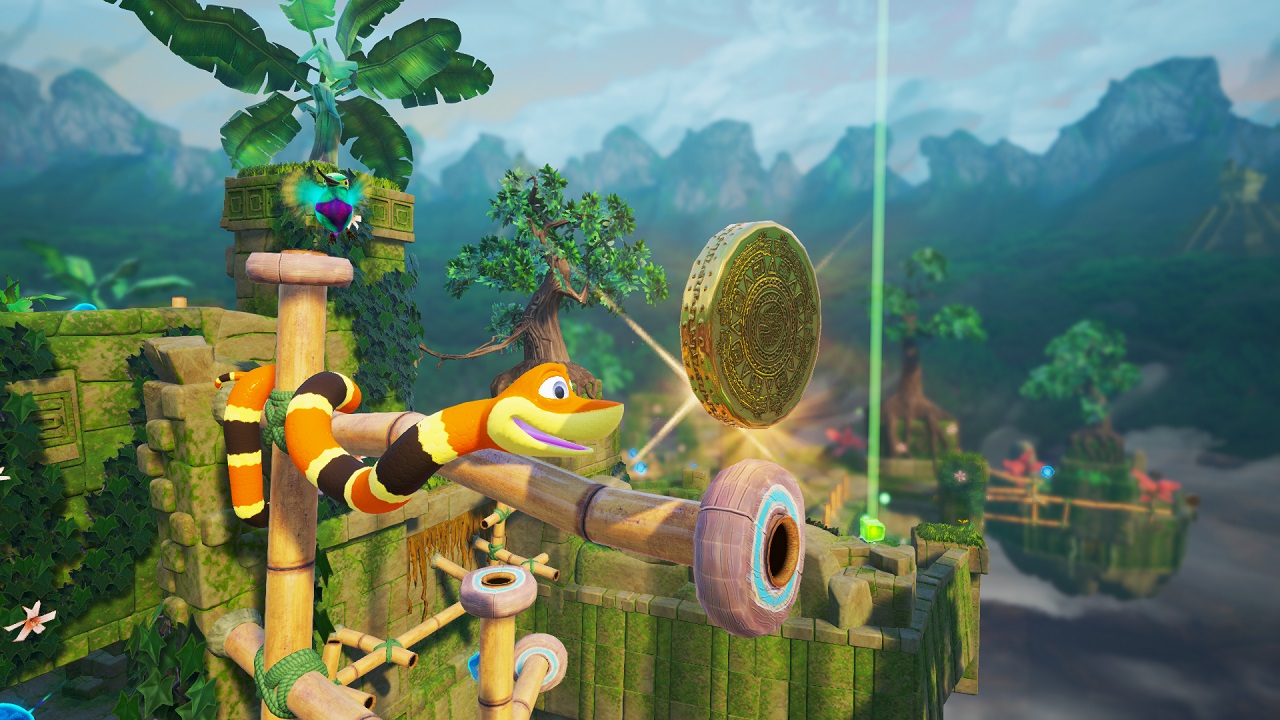 Once I felt comfortable enough moving along a flat surface, I wanted to see how Noodle handled in a vertical situation. Pressing X (or the bottom face button equivalent) allows the copper-toned snake to raise his head. By carefully guiding his head upward and pressing L2, Noodle can coil and climb almost any object in his path. Pulling off a successful climb, even on a short pole, is delightful. I’ve never played a game that featured serpentine-based movement (outside of Snake, bless up), but my time with Snake Pass proved sometimes lacking legs has its own set of unique advantages.

Because every level is built around Noodle’s unique style of movement, Snake Pass is a bit more relaxed than many of its genre contemporaries. The stage I played had no time limit or enemies to bother me. Instead, the lush jungle and its moss-covered ruins were loaded with collectibles and objects to climb at my own pace. I fell into a groove pretty quickly as I slithered around the level and poked my head in every nook and cranny, testing my newfound snake skills.

According to Sumo Digital, each level in Snake Pass contains three different types of collectibles. Only one — a series of geometric shapes that unlock the titular ‘snake pass’ at the end of a level — are required to advance the critical path. The coins and ethereal Wisps scattered throughout levels are more of an open-ended challenge. Talented players can nab ever collectible in each stage while younger or more inexperienced players can focus on the essential items before building up to tougher ones. Even though I spent just shy of thirty minutes with Snake Pass, it was more than apparent that Sumo Digital have managed to build a game that is at once accessible to everyone. Its appeal, at least based off of my experience, is that it can be meditative to some and a challenge to others, all while looking slick and inviting.

If you’re keen to experience Snake Pass‘s serpentine charms, you can check it out on March 28, when it releases on Steam, Xbox One, PS4, and the Nintendo Sssssssswitch.