There aren’t a whole lot of fully featured MOBA games on consoles. While a handful of them exist, some faring better than others, there’s going to be a bigger push this year with games like SMITE and Gigantic heading to the Xbox One.

Although I heartily enjoyed my time with SMITE on PC, I didn’t stick around for an extended period of time, instead opting to head back to League of Legends and Heroes of the Storm.

That may change when SMITE hits Xbox One later this year, based on what I’ve played of the alpha build. 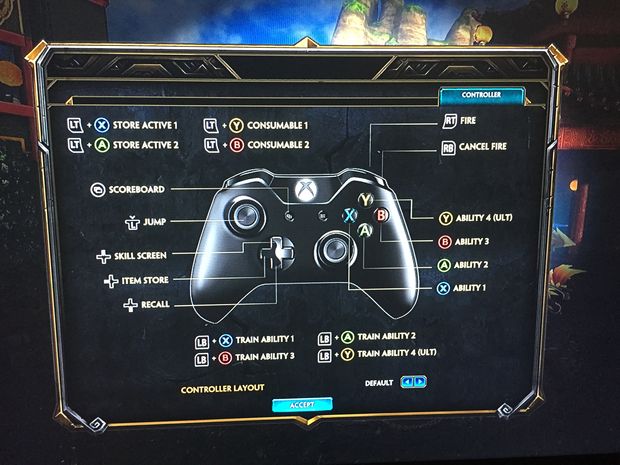 While many of you out there probably dislike the lack of ingenuity when it comes to SMITE‘s roster, I must admit I still love the gimmick of tapping into existing spiritual and celestial beings. SMITE has playable characters representing Norse, Greek, Roman, Hindu, Chinese, Mayan, and Egyptian mythology, and odds are you’ll recognize at least a few faces in the crowd. I’m addicted to scrolling through the little bios for each character, like binge-reading a series of Wikipedia entries. Hi-Rez has done a great job making them their own aesthetically.

For those who aren’t familiar with SMITE, gameplay comes in three varieties currently with the Xbox One alpha — Arena (5v5 all-out combat), Siege (4v4 with two lanes, the most traditional MOBA experience), and Joust (3v3 with just one lane). Assault and Conquest from the PC version are currently not enabled, but the three aforementioned Xbox modes have a “first win of the day” bonus that grants you extra currency. It’s a smart move, as it encourages you to boot up the game, relax, play a few matches, then retire for the evening after getting your bonuses. Heroes of the Storm and many other MOBAs have similar practices, but it feels especially at home on a console for me.

The alpha currently does not allow you to connect your existing PC account (although it is promised for the future) or purchase “Gems” (the premium currency), but it has a decent selection of free characters at the moment, as well as the ability to earn “Favor,” which allows you to “buy” characters by playing the game. I expect Gems will be sold by way of Xbox Live, and so far, the interface isn’t confusing — all of the cost info is right up front.

Currently the going rate is roughly 400 Gems for $8, and each character in the alpha costs 200. The good news is that you can earn about half of the roster by buying each character with Favor, with the earn rate working out to a little less than a week of casual play. It’s a little on the high side, but I’ve seen worse. Plus, the free rotation has been generous so far.

Surprisingly, it controls great on the Xbox One. Everything is extremely easy to pick up, including movement, aiming, and getting to know all four of your character’s abilities, which are mapped to the face buttons. Line targeting and even area-of-effect (AOE) powers are easy to aim using both sticks, and I had very little problem getting my powers where they needed to go. Since basic attacks are all done manually, a controller lends itself well to the action-oriented scheme, and using some character’s dodge abilities felt more natural. Having the rumble feature go off when a queue is finished pre-match is a nice touch.

Currently, the user interface needs a little work. It’s a bit dated, and can stand to look a lot sleeker with its console debut. There are also a few minor issues with the current build, like the lack of indication that you’re holding down the left trigger to “prep” your currently equipped items. Often times I’d need to use an item like a speed boost in a sticky situation, and it wouldn’t go off because I apparently wasn’t holding the trigger correctly.

So far the visuals are very smooth, even for an alpha, but this is a testing phase after all so everything didn’t go off without a hitch. My first match was rocky and unplayable, constantly lagging and counting back the game clock — I tried to leave, but I couldn’t jump into a new game until it was completely finished, which took a fair bit of time. I must say though that nearly all of my matches were very smooth, with little lag involved at all. This bodes well for Hi-Rez considering that it’s still early in the console version’s life cycle.

If Xbox One owners are willing to take the plunge on SMITE, Hi-Rez stands to make quite a bit of money from daily players. The studio is going to have to stay on its game this year however, as there is plenty of competition as more and more developers are jumping into the space. While SMITE still isn’t quite at the top of my MOBA list, I think I’m going to make an effort to play more when it arrives on the Xbox One later this year.