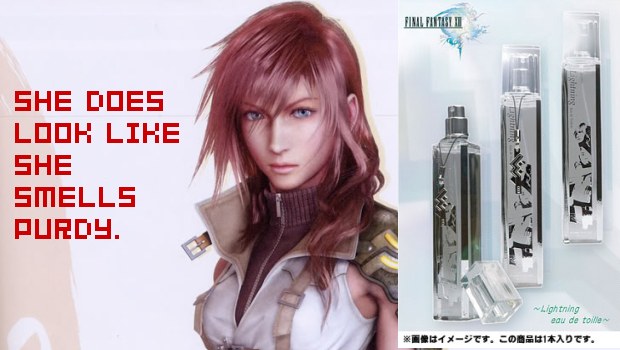 Far be it from me to judge, but I have never understood the appeal of smelling like a famous person, place or thing. In fact I’ve never really understood the appeal of cologne in general, especially when so few men have any idea how to use it in proper amounts. Of course perfumes, or their less powerful siblings Eau de Toilet, I can understand since women seem to have the ability to not dump an entire bottle of scented liquid on themselves. Still, I’m not so sure how many ladies out there will want to smell like Lightning from Final Fantasy XIII.

Square Enix has announced that they will be releasing a Final Fantasy XIII Eau de Toilet a month after the game is released in Japan. The scent, named after the FFXIII character of the same name, will be full of sweet peach flavors that are followed by rose and a feminine musk (the good kind). 50mLs of the scent will cost 7,140 yen or $83. No U.S. release date is set yet, but if you’re walking through the woman’s department of your local department store and you suddenly feel like entering into a random encounter battle it means that it’s probably arrived and some poor shmuck just got doused with a sample of the stuff.

Did anyone ever get a chance to smell that Cloud cologne that was announced a little while back?