I was first introduced to Grand Theft Auto at my best friend’s house. He had the original game for the PlayStation and the two of us would spend Saturday afternoons taking turns mowing down people, shooting up crowded streets and trying to complete the various missions we stumbled across. We never bothered going far into the story of the game, a trend that continued with Grand Theft Auto II and London 1969. Grand Theft Auto III was the first game to really get me to pay attention to the world Rockstar had created. It remains my favorite game in the series and made it impossible for me to return to the top-down perspective of the original titles.

I tried and failed with Grand Theft Auto: Advance, but Grand Theft Auto: Chinatown Wars was more successful, if only for one gameplay element: drug dealing. How funny it was for me that a company most famous for its family friendly persona was home to a game where I could deal acid and cocaine in basketball courts and parks.

If video games are vessels for people to indulge in activities they’d never perform in real life, drug dealing in GTA: Chinatown Wars was my goddamn Nautilus. I racked up probably 40 hours playing that game, only 10 or so of which I spent with the story. The rest of the time, I was working to become the biggest coke dealer in all of Liberty City. The economy of this side-task resulted in many pages of notes, tracking who to buy from, who to sell to and the best escape routes for when the fuzz showed up.

I couldn’t completely get into Chinatown Wars due to years of fully realized 3D worlds, but dealing drugs is easily the greatest and most entertaining thing I’ve done in a Grand Theft Auto game. In fact, it’s my favorite side-quest ever and I don’t think anyone can name one that is better.

When CJ tasked us with coming up with the best side quest/mission ever, Metal Gear Solid: VR Missions, a game comprised entirely of side quests, came to mind.

It’s probably one of the most fascinating games I’ve played, and the most driven I’ve ever been to 100% something. Originally sold as the third disc of the Japanese special edition (Integral), VR Missions had 300 levels to get through on top of hidden extras and the most coveted feature of all — the ability to play as Cyborg Ninja/Gray Fox. I’ll fully admit that tactical ninja action is the entire reason I bought the game, but I ended up loving it for all of the little non-ninja gems. Kaiju battles and other such oddities were sprinkled in, among some of the best gimmicks — murder mysteries.

It’s insane how much Konami squeezed out of the original engine and adding a puzzle minigame that’s only present for a few missions takes the cake. For several levels, you’re forced to divine specific solutions for a series of Genome Soldier murders. Once you figure out the culprit, you bring them into a “jail-like” objective in the center. A few were so subtle that they involved combing over details like a lack of smoke coming from a soldier’s mouth (as he was eating a Popsicle) or capturing a fleeing criminal. And the final mystery at the end? A thing of beauty I won’t spoil here.

Konami attempted to re-create the magic of the VR series several times as a packed-in mini-game, but none were quite as magical as the entire project that was dedicated to it.

I love all the Gratitude Crystal missions in Skyward Sword, but the two that stand out the most both involve intense, ambiguous intimacy. As such, either one of them could be easily adapted into award-winning films. Actually, maybe they already have. The side story where you help a sweet sissy boy get buff has a lot in common with Oscar-winning film Moonlight, but with more grunting. Likewise, the shopkeeper girl romance mission could be compared to the first half hour of the movie La La Land, except it’s not at all boring.

If you put both of these stories together, you might end up with something like Y Tu Mama Tambien. What a spicy meatball! 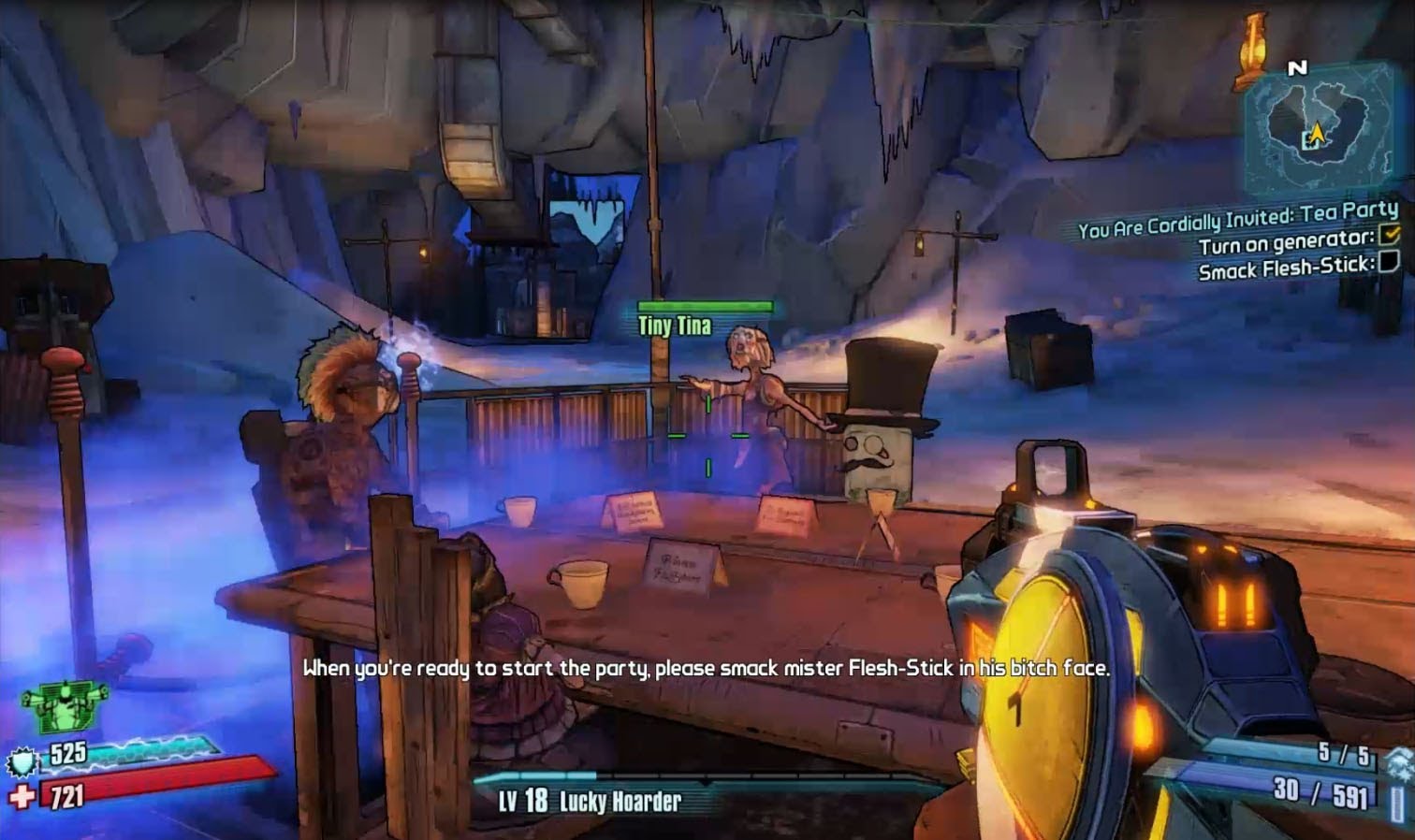 Say what you will about Gearbox in its current state but the Borderlands series is a lot of fun for a whole lot of folks. With a striking visual style and quirky (mileage may vary) sense of humor, the Borderlands games have cemented themselves as something special in a sea of gritty first-person shooters.

One of my favorite moments from the series is a quest called You Are Cordially Invited. It’s set up in the guise of attending a tea party that Tiny Tina is throwing. Of course, this being a universe populated with psychopaths, the guest of honor is Flesh-Stick a local bandit. You lure Mr. Stick to Tina and help prevent his bandit friends from rescuing him. The quest culminates in Flesh-Stick being executed via electrocution, but not before you find out that Flesh-Stick was responsible for the deaths of Tina’s parents. She throws the switch and says in a voice uncharacteristically grave, “Best tea party ever.”

It was a poignant moment of levity in a game featuring elevated cartoon violence cranked up to 11. I saw Tina, even if only for a moment, as capable of feeling pain and loss and grief. The mask doesn’t slip for long but that moment resonated with me throughout the game. 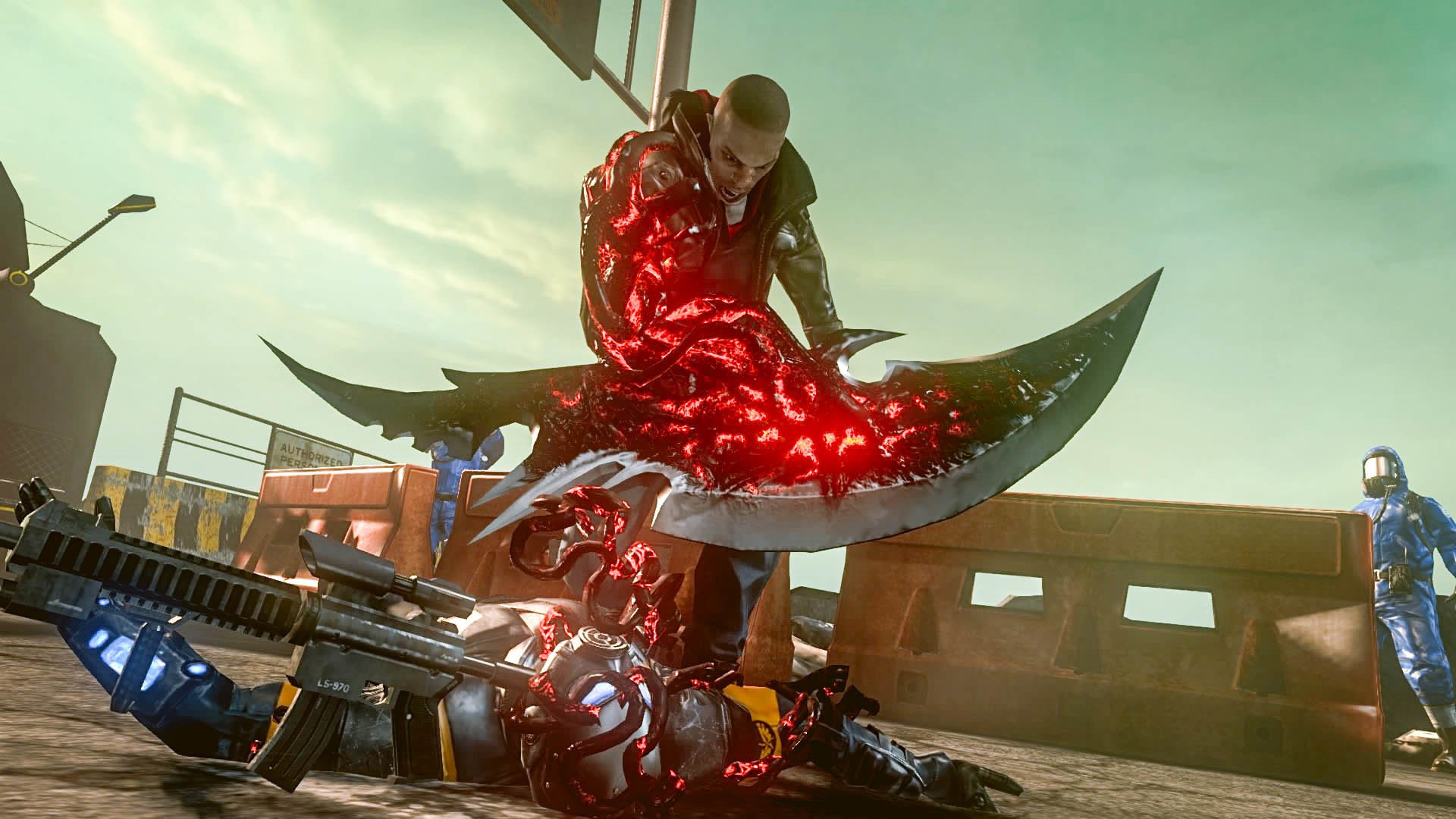 Major points to CJ for reminding me about the true One Piece theme (Yo-ho-ho he took a bite of gum gum).

I really dug eating folks in the Prototype series. Other games have experimented eating passersby for sustenance (like the Infamous series), but none made it so quick and enjoyable as Prototype. The fact I could eat while running (which is something I’ve yet to master IRL) and then transform into that person to hide from enemies was awesome. I guess to make it fit into CJ’s prompt (cause he’s a stickler), one of the side mission types was to find and eat a particular officer. It was a lame tracking thing where you had to find the person in the middle of a giant circle, but each eat gave you a little bit of story. It was pretty neat. Basically, I spent, like, half of the time playing the game running around just eating folks rather than playing it. I’m a monster.

Ask me about side quests and I’ll immediately think of discrete chunks of narrative content rather than any specific mechanic or system. By that criteria, one of my favorite side quests would be the Roman e storylines from Baldur’s Gate 2. These weren’t the best romances in all of gaming, or even necessarily the best ones BioWare has done, but they blazed a trail for thirsty gaming to follow. Before them, romance was usually left up to the predetermined pairings in JRPGs. With Baldur’s Gate 2 players had to work a bit harder and say the right things. And best of all, the story continued even after you and your chosen one paired off, having consequences for a later story development, both in the main game and the later expansion.

Thus, they felt organic and lasting in a way that even more contemporary romance stories don’t. Perhaps future RPGs can learn a bit more from these classics, and keep some of the mystery of who you can hang, rather than just plant a big ole heart symbol next to the flirty line.

I’m just popping in here to mention the one Witcher 3 quest that half of the readers clicking this article will expect to see. IT’S MENTIONED, EVERYONE KNOWS IT’S GREAT, NOW LET’S MOVE ON. 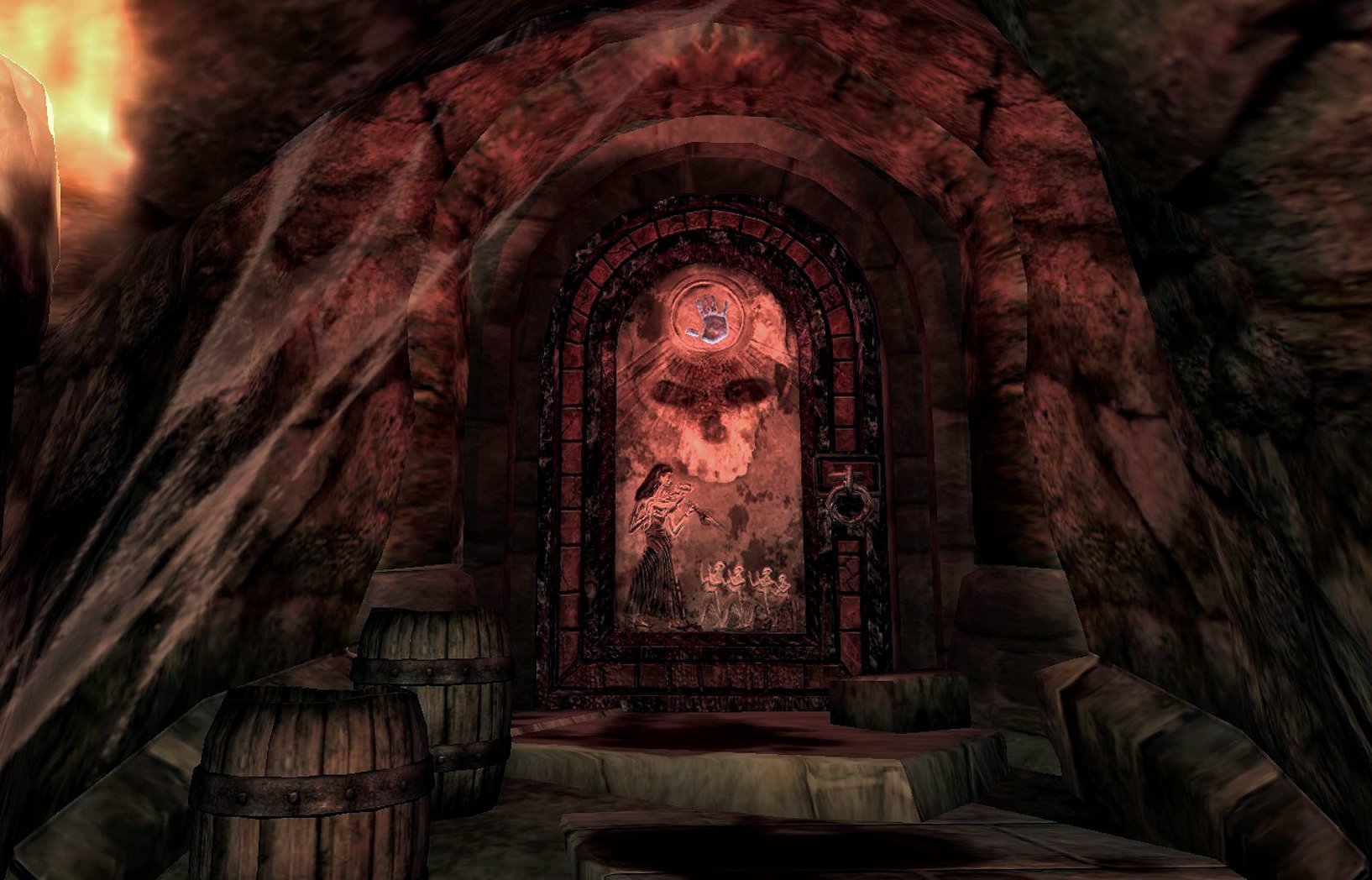 While the Elder Scrolls games have always had a glut of sidequests to choose from, most people would agree that the Dark Brotherhood always has some of the best quests available. You can kill anything in say, a fighter’s guild. But the Dark Brotherhood is all about hiring a contract killer to off marks in weird and interesting ways, with extra rewards for completing those bonus objectives.

The best though, has to be Whodunit? Your client has invited five people he hates to a dinner party, expecting you to take care of them. But you’re being offered a bonus if you can kill them all without letting anyone witness each others’ murders. This is a prime example of why the Dark Brotherhood is home to some of the best quests in Elder Scrolls games like Oblivion. In this quest, you can poison someone’s food, persuade people to wander into isolated areas for easy kills, and even cause some of the patrons to turn on each other.

That’s why every time I boot up a new save of Oblivion or Skyrim, I always murder someone senselessly first, in order to get into the Dark Brotherhood as soon as possible.

All damn fine side-quests that all prove that sometimes the main story isn’t the main reason we play a game.