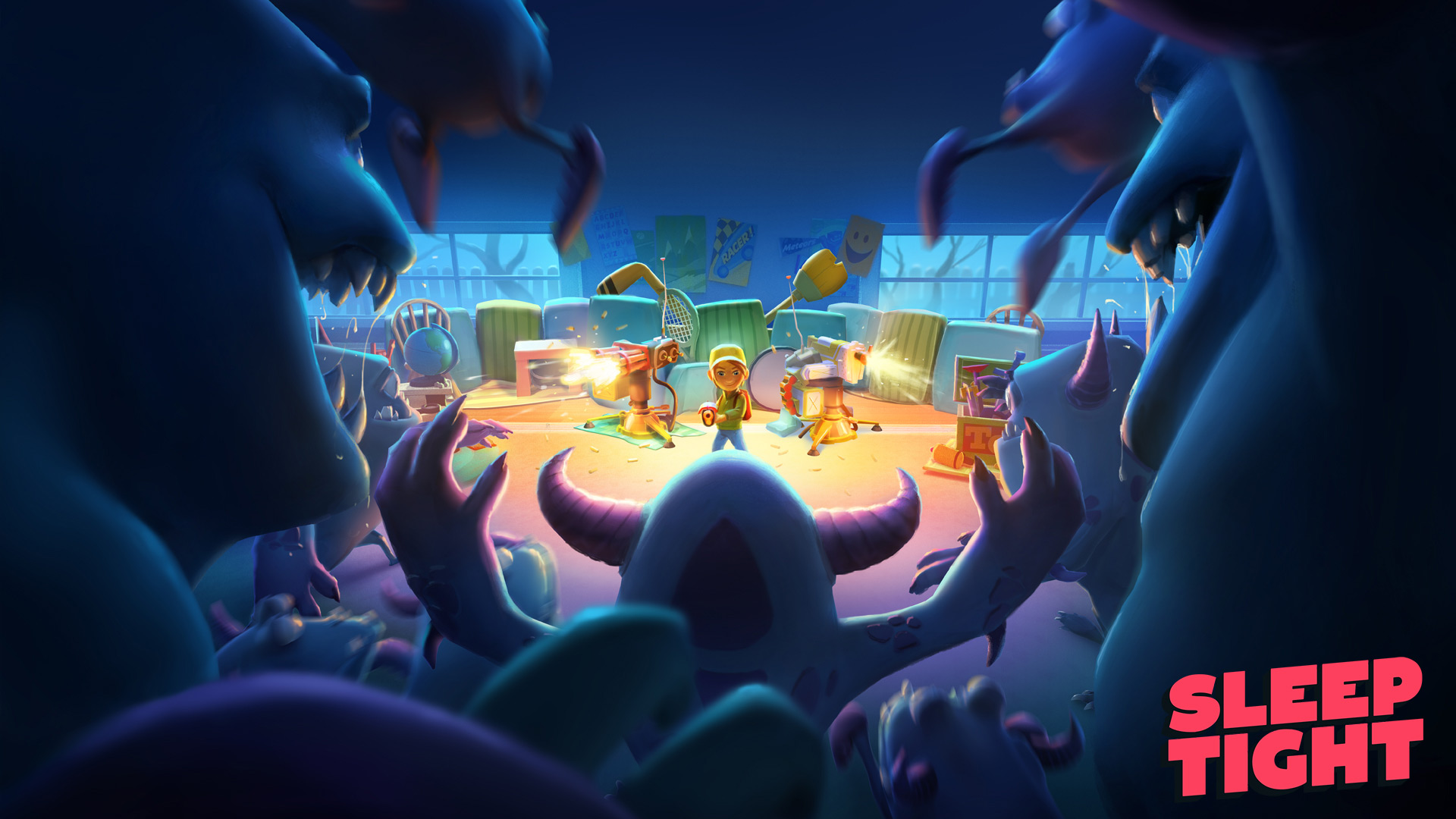 It’s a thought we’ve all had at least once in our lives. When the lights go out, our bedrooms transform from the sanctuary of play and imagination into a frightening, pitch-black void where anything and everything is coming to get you. We think there are monsters under the bed, in the closet, in the shadows… anywhere we can’t see with our own two eyes becomes a potential portal for some creature to come into our world and drag us back into theirs. That’s why mom or dad does a monster check before flicking off the lights. That’s why we have little nightlights, to provide us with a weird little sense of security from the dangers that only exist in our imagination. Monsters hiding in the shadows is a classic concept of childhood and has inspired stories older siblings use to torment their brothers and sisters, and one fantastic Pixar film.

It’s also the inspiration for Sleep Tight, the new twin-stick shooter coming in 2018 to the Nintendo Switch and Steam. It’s being developed by We Are Fuzzy, a new development team made up of video game, television and movie veterans. Their resumes are damn impressive, working on such games as Far Cry, League of Legends, and Rainbow 6, as well as the HBO series Westworld and the hit Disney films Wreck-It Ralph and Zootopia. Oh, and also The Walking Dead. And Iron Man. And Iron Fist, but don’t hold that against them.

An impressive CV for sure, for everyone on this small team, but it doesn’t mean squat if they ain’t making a fun game. From what I have experienced of Sleep Tight, it has the chance to be something special. I had a chance to get a hands-on with the title last month in San Francisco. We Are Fuzzy co-founders Maxx Burman and Banks Boutté — yes his real first name is Banks — joined me for the session along with Chris Gouche, the wildcard. As they walked me through the game, I could see all those little, shared childhood memories present it the game.

“Everything we put in this is about hitting that nostalgia bone for everyone,” Burman told me. “That’s been a cool thing regardless of people’s age. We’ve put enough things in there that are so common for people our age that I’ve had 40-year-old women look at this game and go ‘Oh my God I did that when I was a kid.’”

Cast in the role of child defending their bedroom, Sleep Tight is a twin-stick shooter with a base-building mechanism challenging you to last as many nights as you can. Every day you’re given suns as currency to build up your base as you see fit. There are walls and turrets that can be constructed and fortified over time. Daylight lasts until you’ve spent your suns at which point nighttime arrives and the monsters come out of the shadows. Literally, a monster can spawn from anywhere the light doesn’t touch.

Nighttime lasts for just one minute, but that’s one minute of pure survival as you have to keep moving and shooting while making sure not to run out ammunition. Once that minute is up, the cycle starts again. You’re given more suns to upgrade your base or buy new guns as well as stars you acquire during your slaughter of the monster hoards that can be spent as well.

Sleep Tight has a cute aesthetic. It could very well be Andy’s room from Toy Story. The music and sound effects, especially those coming from the monsters, are delightful. Monsters move with a gleeful ridiculousness that is adorable until there are 10 of them coming at you. There are four stations in the room that can be used during the day: research, defense, weapons, and power-ups. You can incorporate these stations into your base design as unlike a wall, they cannot be destroyed.

The game starts off easy. Nights one through five don’t feature that many monsters and my base didn’t take that much damage. Playing on the PC with an Xbox One controller, my movement was fluid, though the 360-degree rotation of my character could have been smoother. Sleep Tight doesn’t have a story and its challenge is primarily scoreboard based. What We Are Fuzzy wants is for players to test out new base designs and strategies with each playthrough. Maybe the first time you try and funnel the monsters into a single point where you and your turrets can gun them down. Maybe the next time you choose to unlock the most powerful guns and go straight-up Rambo on the motherfuckers.

“I love that feeling of wanting to be better than I was the night before,” Boutté said. “Or wanting to improve my own score. You know it’s that competitiveness within me gets scratched when I get to improve from night to night.”

“Yeah there is kind of a lot of strategy for an arcade game,” Gouche added. “There is resource management, enough that you have options but never enough that you feel overwhelmed. One night I could create a bunch of walls and the next night I can try just a bunch of turrets all over the room and just see if I can hold the middle of the room.”

That strategy and those options were on full display in my time with the game. My first go with the game was around night 22, roughly 40 minutes in, with a prebuilt base and I did a pretty damn good job lasting several nights. At least Burman said I did well. He might have been lying. Of course, he also told me no other media outlets bothered to try out the game before I sat down with them so keep that in mind when you read other previews of this.

Anyway, Sleep Tight has a lot of charm but there are small issues I noticed in my short time with it. For starters, and this may just be me, the proportions feel odd. Each station is supposed to be a bed or desk or something else you’d see in a kids room, but they’re tiny. I get why that is for the sake of the game. Obviously, you wouldn’t want a giant bed impeding your character of your design options. But in the early days of the game, before you’ve built up your base, the room looks empty and clean in a way a child’s room rarely is.

The other issue is a lack of intensity. Sleep Tight is being designed to be playable for everyone as we all should have memories of worrying about monsters under the bed, but those early nine or so days can be boring, especially if you’ve just come off some of the more high-level nights. But once I reached night ten, it started to change.

Every 10 nights is a blood moon. These nights last 90 seconds and feature monsters in great numbers coming to get you. And every blood moon is preceded by the voice of the princess warning you of the return of your fallen foes. Of course, it doesn’t do that, that would be stupid. Not only are blood moon nights more challenging, visually they’re the most striking the game has to offer. Monsters moving in the shadows of the pale moonlight are easier to see, but when they’re bathed in crimson of an ungodly sky they really can jump right out at you.

“We went really red with it [blood moon],” Burman said. “We wanted to force you to stay in the light to survive.”

While most of my hands-on was with the PC version of the game, I did get a few moments with it on the Switch. Sleep Tight is being developed using the Unreal Engine. I asked if there were any issues getting it up an running on it. Burman said getting it to work on the Switch was not easy but Nintendo has been a great help in making it happen.

“We were already a year and a half into making this when the Switch came out,” he explained. “The Switch comes out and we’re like ‘We’ve been working on this game and here is a console that is the perfect platform for it.’ We knew we had to get on there and we were lucky enough to show it to Nintendo and they loved it and we were off to the races with the Switch. But we also had to wait a little bit of time for the tools to catch-up for us to be able to use them.”

“We’re excited about the Switch,” Boutté added. “We feel like the platform fits this game and the Pixar-esque look of the game and this art style and the arcade, twin-stick shooter aspects come so perfectly to the Switch.”

I only played Sleep Tight on the Switch for a few minutes and it was definitely a bit rougher than the PC version. But it was perfectly playable and in handheld mode, it really did feel like it was the perfect platform for this fun little game. As a twin-stick shooter, it will require either both of the Joy-Con or a Pro controller. There is no co-op, however, I was teased with some secret features players will be able to unlock.

As of last month Sleep Tight was in a fun and absolutely playable condition. There is a little work to be done between now and launch with some animations — I didn’t know I was being hurt until they pointed it out to me — as well as changing up the button inputs and fine-tuning those first few nights so it doesn’t always start out so slow, but I’m sold on the concept. Hopefully, when Sleep Tight launches in Q1 of 2018, it won’t be buried under an avalanche of other Switch titles because that is becoming more and more common of an occurrence with each new week on the eShop.

[Kyle MacGregor, who represents We Are Fuzzy for Stride PR, was previously employed at Destructoid. As always, no relationships were factored into this writeup.]