We got a big shock at the beginning of the week when Valve announced its partnership with HTC to produce a new virtual reality headset. We all knew the company had ambitions to enter the console market with Steam Machines, but the inclusion of a VR device makes it seem all the more bold. The VR arms race we’re seeing with Facebook, Sony, and now Valve shows that it’s likely going to get heated in the coming years.

Over the course of GDC week, Valve let only a select few members of the press go hands-on with its device and play some demo titles. It was behind closed doors, and many people were turned away. But fortunately, Destructoid was among the few to give the new technology a test drive and experience the VR title Skyworld from the developers at Vertigo Games. 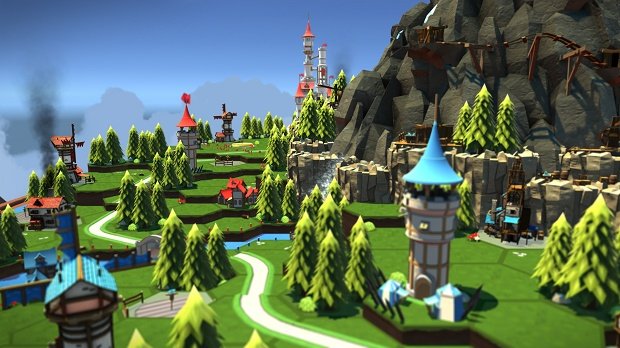 For our demo, the developers led me into a closed-off room which housed Valve’s virtual reality hardware. Around the room were two cameras that tracked movement and set the boundaries of the VR environment by scanning the dimensions of the room. They then handed me the headset, which still looked as if it was in the prototype phase. Wires to the headset were numerous, which required a belt around my waist to hold all of them down. Honestly, it felt like I was wearing something from ’90s cyberpunk like Ghost in the Shell or Johnny Mnemonic. It was weighty, but had a number of devices working at once. I actually almost tripped over one of the wires before our demo even started.

But any apprehension I had for the device soon faded once I tried out the interface and witnessed it in action. With the headset on, I was in a home menu showing a number of games and applications. The controllers they gave me, which were also connected with wires, were two wand-like devices that were somewhat like a mix between the Sony Move and Wii Remote. Similar to the headset, they were in early form. Using trackpads on the controllers allowed me to cycle through options. And just for fun, pressing down the trackpad caused a balloon to inflate from the controller in the digital space, which was amusing. It felt intuitive, and surprisingly accurate.

I could look around to see the menu system with its grey, almost minimalistic background, but the Valve engineer instructed me to look towards the floor. On the floor was a box, which represented the center of the space. Once I started walking forward outside the box, I made it a few steps before a grid popped up in front of me. This grid represented the physical wall that I was about to walk into, which the camera picked up and visualized within the VR space. It was pretty cool stuff, and I felt that I could’ve spent plenty of time exploring the home menu, but of course, they had a game to show.

Last year, the developers of World of Diving showed off an impressive demonstration for their underwater-exploration sim. The use of the Oculus Rift was well designed and featured impressive depth and range. With the success and buzz they generated with that title, they attracted the attention of Valve, leading to a partnership. But the new VR technology they were presented meant having to design something a bit different.

“When they asked to work together with us to make a demo for the GDC announcement, the first thing that came to mind was that we should do something like World of Diving,” said creative director Richard Stitselaar. “But that title was designed around the first Oculus, and then the DK2 came along, we had to ramp it up to seventy-five frames per second, then Valve came along and said ‘guys, it needs 90 frames per second.’ So we had to do a lot of optimization on the game, and we figured we should use our knowledge with VR and apply it to a new game instead.”

Skyworld is totally different from World of Diving. Set on a floating island that houses a small civilization, you play as an omnipotent ruler that must wage war on the opposing side. As a quasi tabletop turn-based strategy title, players use both Steam controllers as wands in game to conjure up creatures and interact with the world. Over time, you’ll build your defenses and expand your resources, which will allow you to send infantry and even dragons to attack your enemies.

With the left controller, I was able to pull up a magic book, which housed unit info and spells to cast. Using the right controller allowed me to interact with the elements on the table. Whether picking up units to reposition them or interacting with blacksmiths or dragons, each controller had its own separate uses that complemented the other.

“First we had this interaction model where you would look at something as this dot in the middle and then select it,” said Stitselaar. “It feels natural to have something in your hand that could enhance the world itself.” 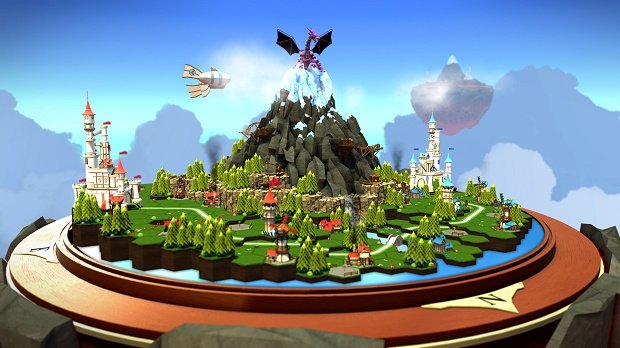 When you think of VR, you’re probably thinking of something that’s a bit action-y or fast-paced, and likely not a turn-based strategy title. But Skyworld definitely makes great use of the technology. I was able to view all aspects of the environment with clarity, as zooming simply meant stepping closer. Of course, I had to let go of some very basic certainties when playing with the demo. For instance, we all know that if there’s an object in front of you, then you’ll likely have to move if you want to get around it. I spent much of the demo walking around the ‘table,’ never thinking to actually walk up to whatever object I wanted. Eventually, the engineers from Valve and Vertigo Games instructed me that it was okay to walk through the table — it wasn’t real.

After attacking enemy installations and moving my infantry around, my time with the demo ended. It was fairly brief, and I felt I only scratched the surface of what I could do. Valve’s technology was easily the most impressive use of virtual reality I’ve seen in a long time, though. Moreover, Vertigo Games’ work impressed. I was pleasantly surprised to experience a title that used VR in an original way. While the technology has a ways to go before it will get in the hands of consumers, I’m excited about what the future of VR holds.