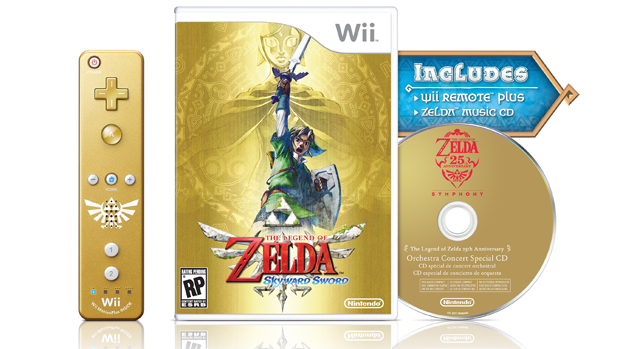 Nintendo announced today information regarding a limited edition bundle for The Legend of Zelda: Skyward Sword. The package, which will retail for $69.99, comes packaged with a gold controller. Additionally, every copy of Skyward Sword from the initial production run — standard and special editions — will have a compact disc with orchestral arrangements of songs from the series which will be played at upcoming 25th anniversary concert performances.

I had pretty much forgotten about Skyward Sword, truth be told. I always have the feeling that I know more or less what I’m getting with Zelda titles and that there’s always one somewhere on the horizon. That gold Wii remote does look pretty baller, though. If I didn’t already have five remotes that I don’t use, I’d be all over that.