Xbox One more so than PlayStation 4

Bethesda has brought back The Elder Scrolls V: Skyrim with a re-release for PC and consoles. It’s out today and, unsurprisingly, my feeds are freaking out. I’d say I forgot how big this game was in 2011, but I haven’t. Skyrim never left us, thanks in large part to the continued efforts of talented mod makers.

While Chris has been chipping away at the main quest and lord knows plenty of side stuff for a full review of Skyrim: Special Edition, I’m over here dealing with an army of sentient mannequin men. 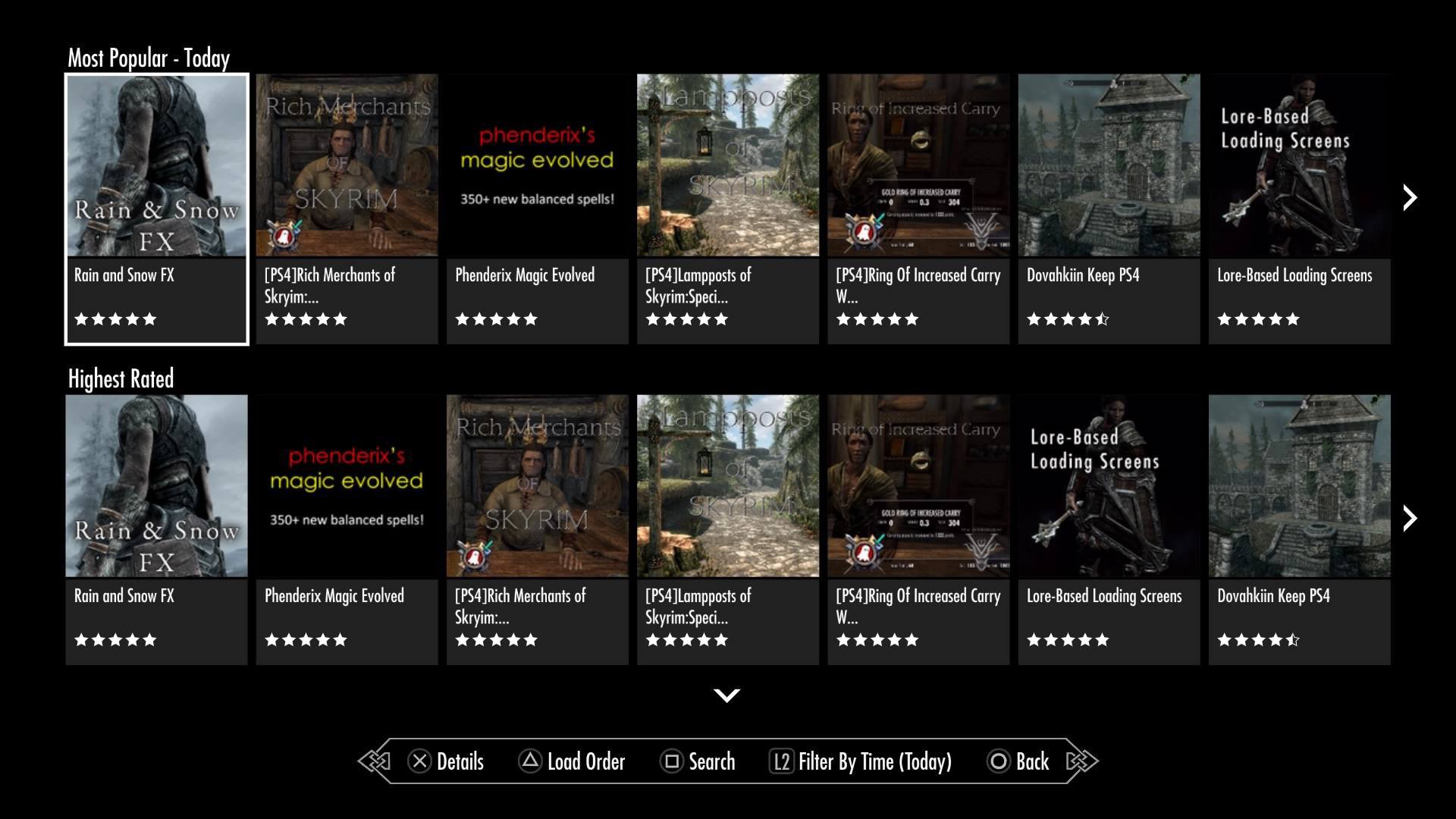 This is what you’ll see once you head into the mod menu. It’s functionally similar to how Bethesda lists out mods for Skyrim and Fallout 4 through Bethesda.net, with options to filter by categories like “user interface,” “cheats,” or “graphics.” It gets the job done, though it’s much faster to sort through listings, find what you’re after, and queue the download on the website than it is inside the game.

Speaking of, you will need to create a Bethesda.net account. I know, I know. Thankfully, it only takes a minute, and linking it to your copy of Skyrim is as easy as logging in. Pretty painless. 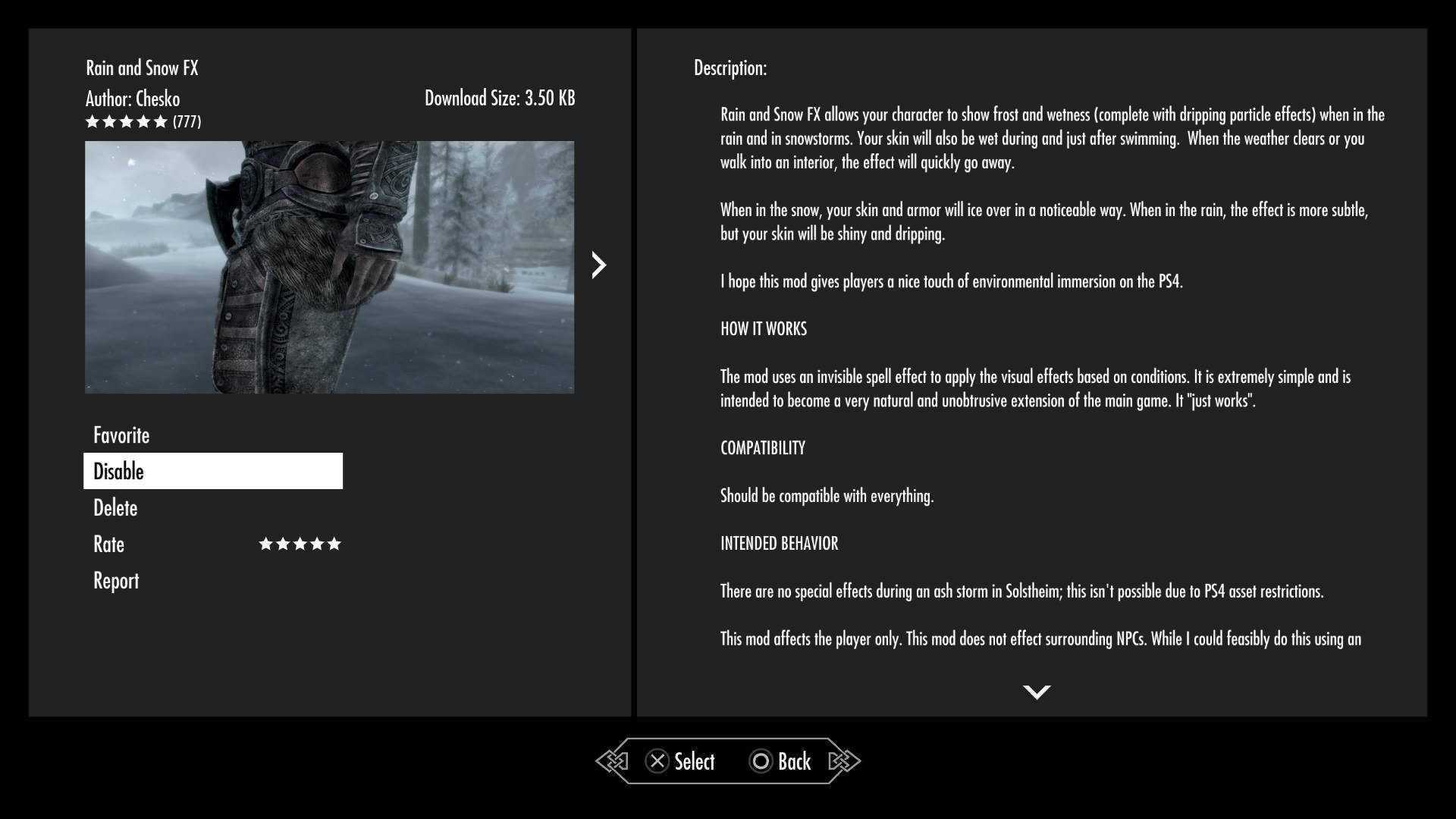 Individual mod pages let you see pictures of what you’re about to get yourself into, gloss over the oftentimes unintentionally funny author description, report ne’er-do-wells, that sort of thing.

Notice that file size? On PlayStation 4, at least, mods tend to be minuscule. KB, not MB. Creators can’t upload “external assets,” so the ambitious total conversions and more out-there, original mods that we know and love don’t have a place on PS4. (Blame Sony.) For that unfortunate reason, your best choice — assuming you have a choice in platform — is to play Skyrim: Special Edition on either Xbox One or PC. 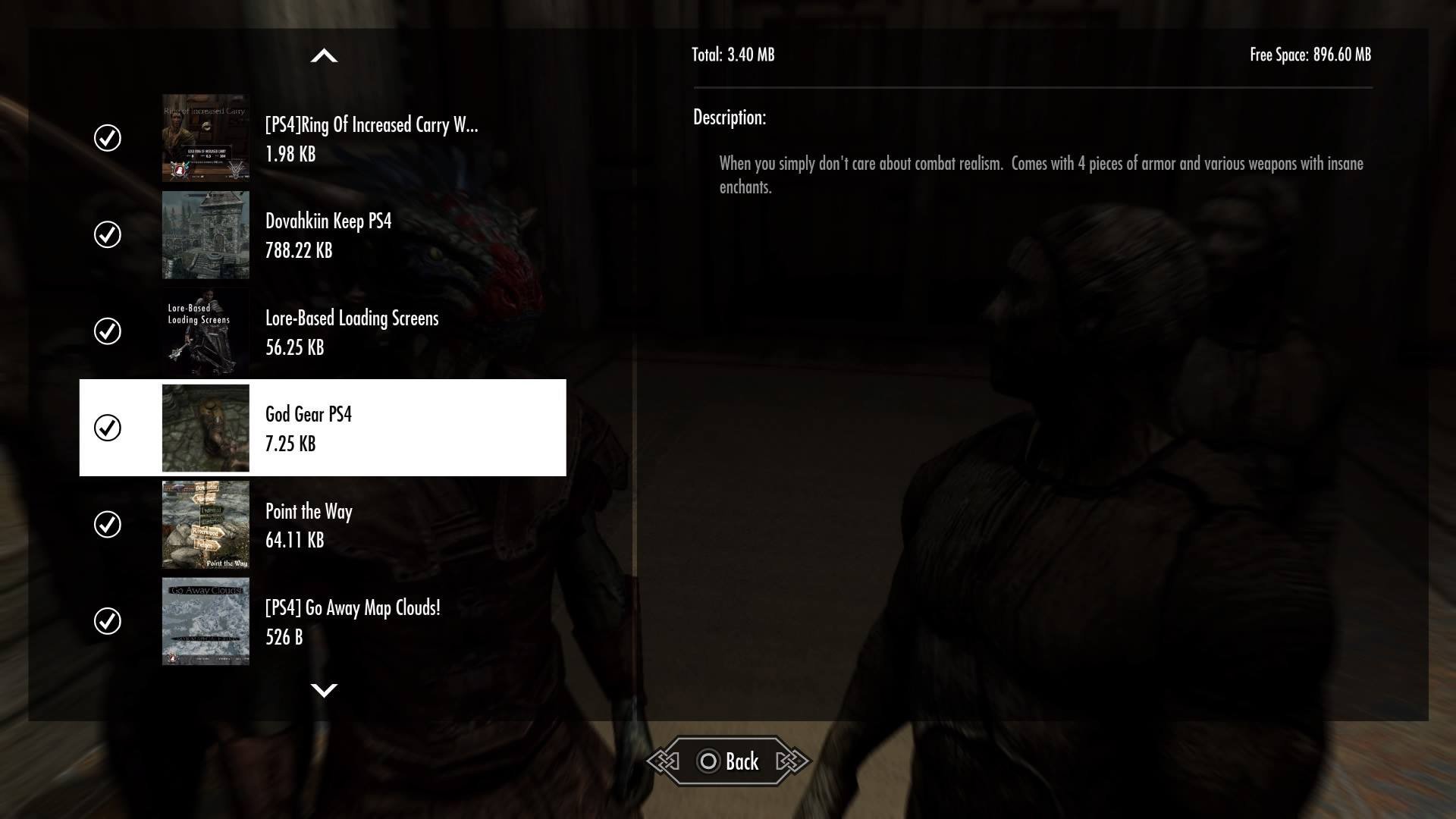 Once you’ve loaded up on mods and begun to play, this is what the in-game mod screen looks like, accessible from the pause menu. It shows a running total of what all you have enabled, and not much else. It’s more of a quick reference guide than anything.

If you care about Achievements and Trophies, keep in mind that you won’t be able to earn them in save files with mods activated. Per Bethesda, “When you play with Mods, a new character filter is created with their own set of saves and autosaves. These saves are marked with an [M] in the title. Your character and saved games pre-mod remain untouched and ready for you to go back to at any time.”

How’s the selection at launch? Better than expected. There are 128 mods for Xbox One and 50 mods for PlayStation 4 (that asset restriction really weighs this port down), about half of which I’ve activated. 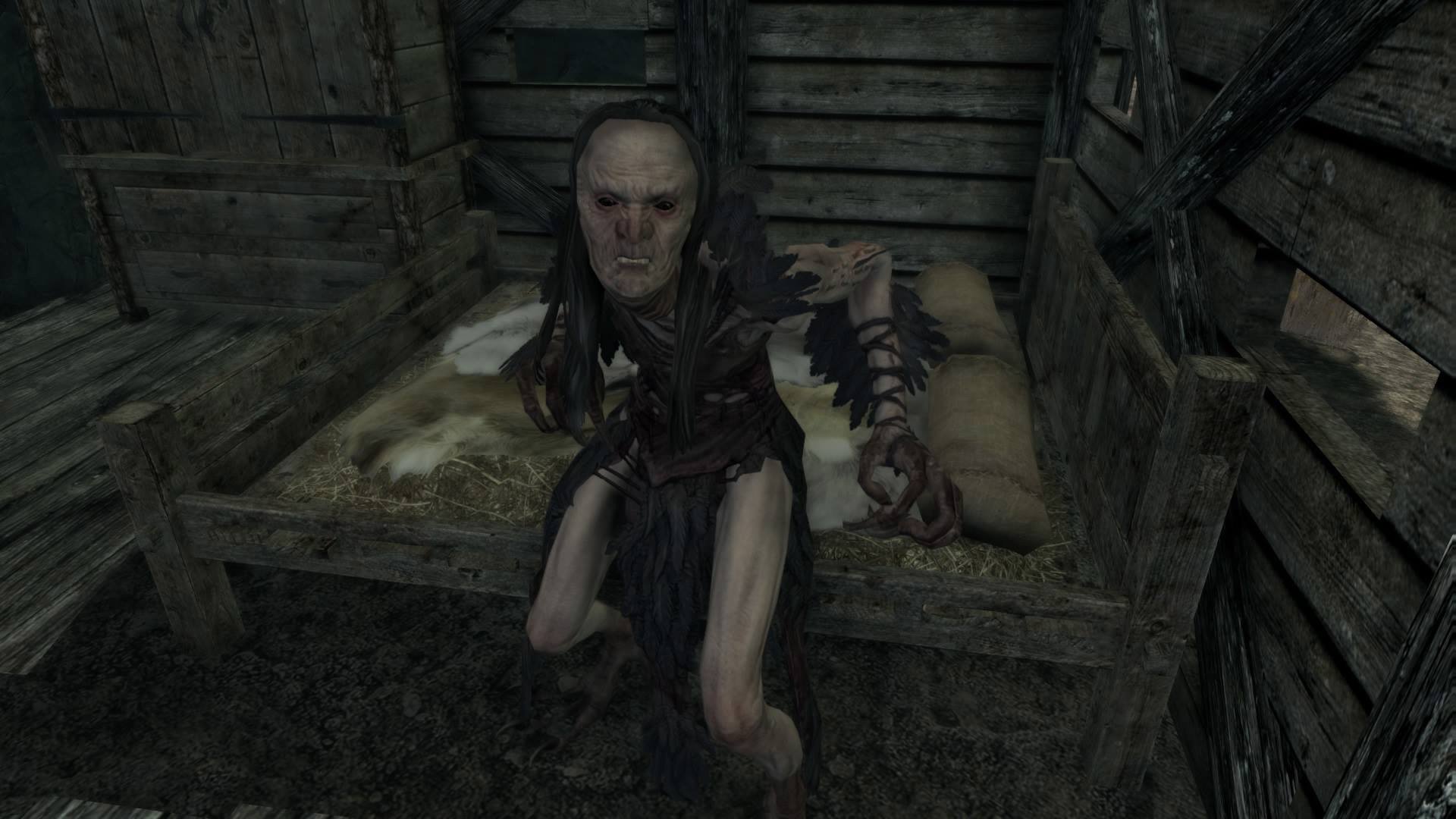 Here’s a selection of what I have running (again, these PS4 mods are more rudimentary):

Cuddles – A dream come true. “An accident at birth left her horribly disfigured. Teased as a child for her disfigured face and misshapen body, closely resembling that of a Hagraven she has hidden from the world in Riverside Shack. […] You can also marry her, don’t be put off by her appearance she is actually an excellent cook. I am not sure how she is with children so the risk is yours on that front. Wedding clothes and several Amulets of Mara are on the table.”

Invincible Dogs of Skyrim. “I don’t know about you, but when Meeko died I cried for days. I want make all dogs Invincible so other won’t go through the pain of losing a loyal a faithful dog.”

Ring Of Increased Carry Weight. “A simple mod that adds a one ring that gives the wearer 1000 points of extra carry weight per ring, and another that adds 1000000 carry weight.”

Skyrim Mercenaries. “These NPCs are generated randomly from all Races and Sexes. They start at level 6 and level up as you progress through the game. Equipment is from a Levelled List which means it will vary according to the level of the NPC.”

YOU DON’T KNOW ME – No NPC Greetings. “NPCs will no longer start spewing their inner-monologue at you as soon as you’re in earshot.” 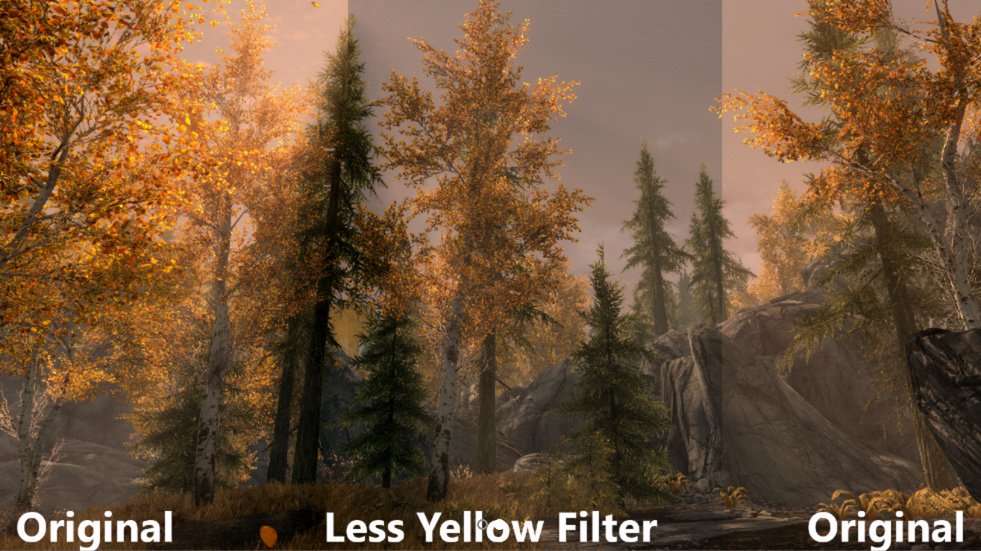 Less Yellow Filter. “This mod reduces the intensity of the godrays during clear / cloudy / rainy weathers, mostly during dusk and dawn, which is what makes it look like the game has a yellow filter put on top of it.”

Lore-Based Loading Screens. “Adds 160+ new loading screens steeped in Tamrielic lore. Become deeper immersed in the Elder Scrolls mythos with tons of quotes from in-game books (from Skyrim and past Elder Scrolls titles), history, mythology, and little-known facts about the world of Tamriel.”

Disable Cinematic Kills. “They are really awesome the first dozen or so times, but eventually (for me) they tend to cause combat to be oddly paced, or just take too long to finish for my taste.”

Less Aggressive Animals. “Are all animals suicidal or just stupid? You are large and potentially dangerous to them, and they have plenty of other weaker prey around, so they shouldn’t need to hunt humans.” 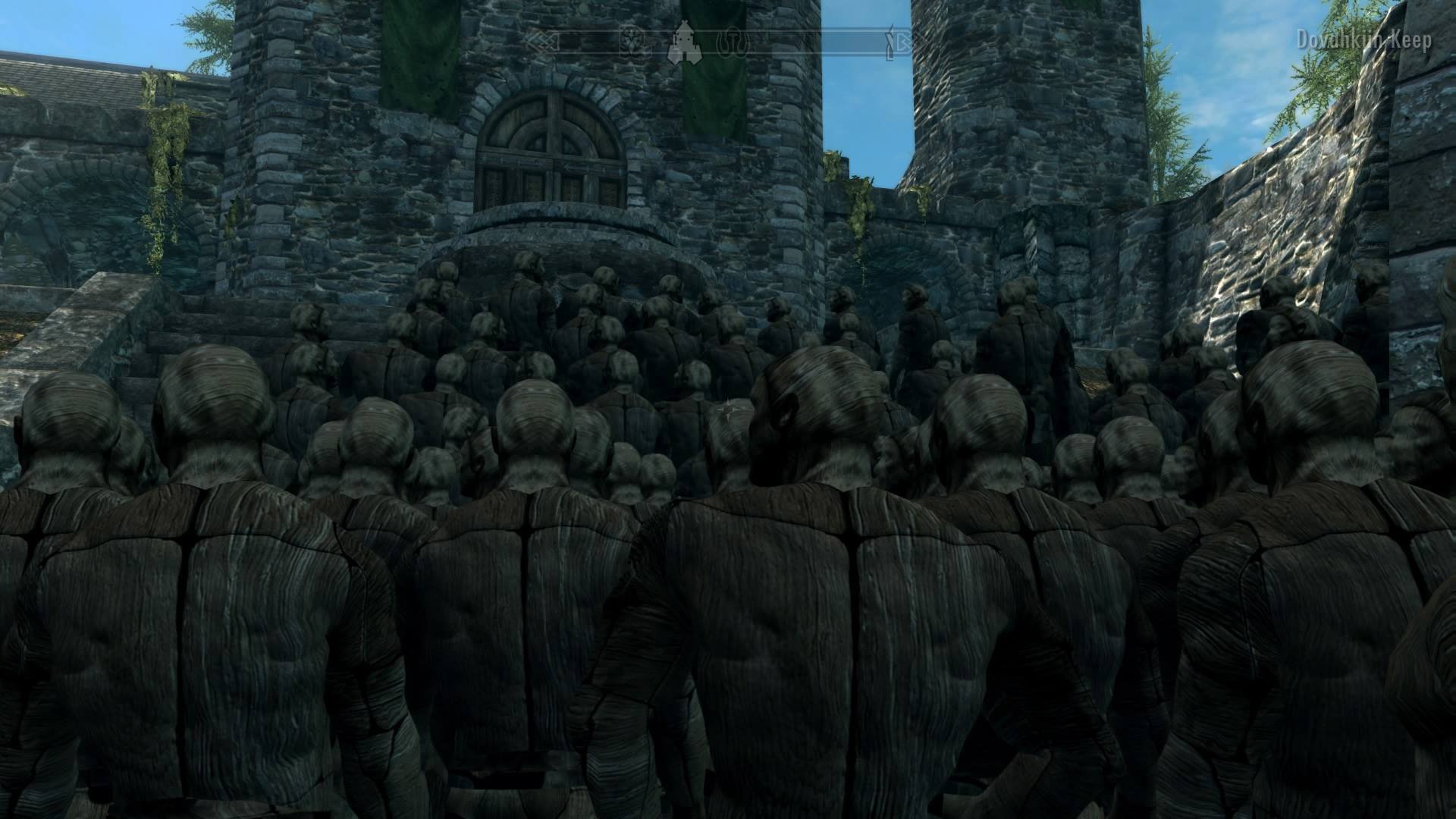 Whoops. Something must have gone awry. 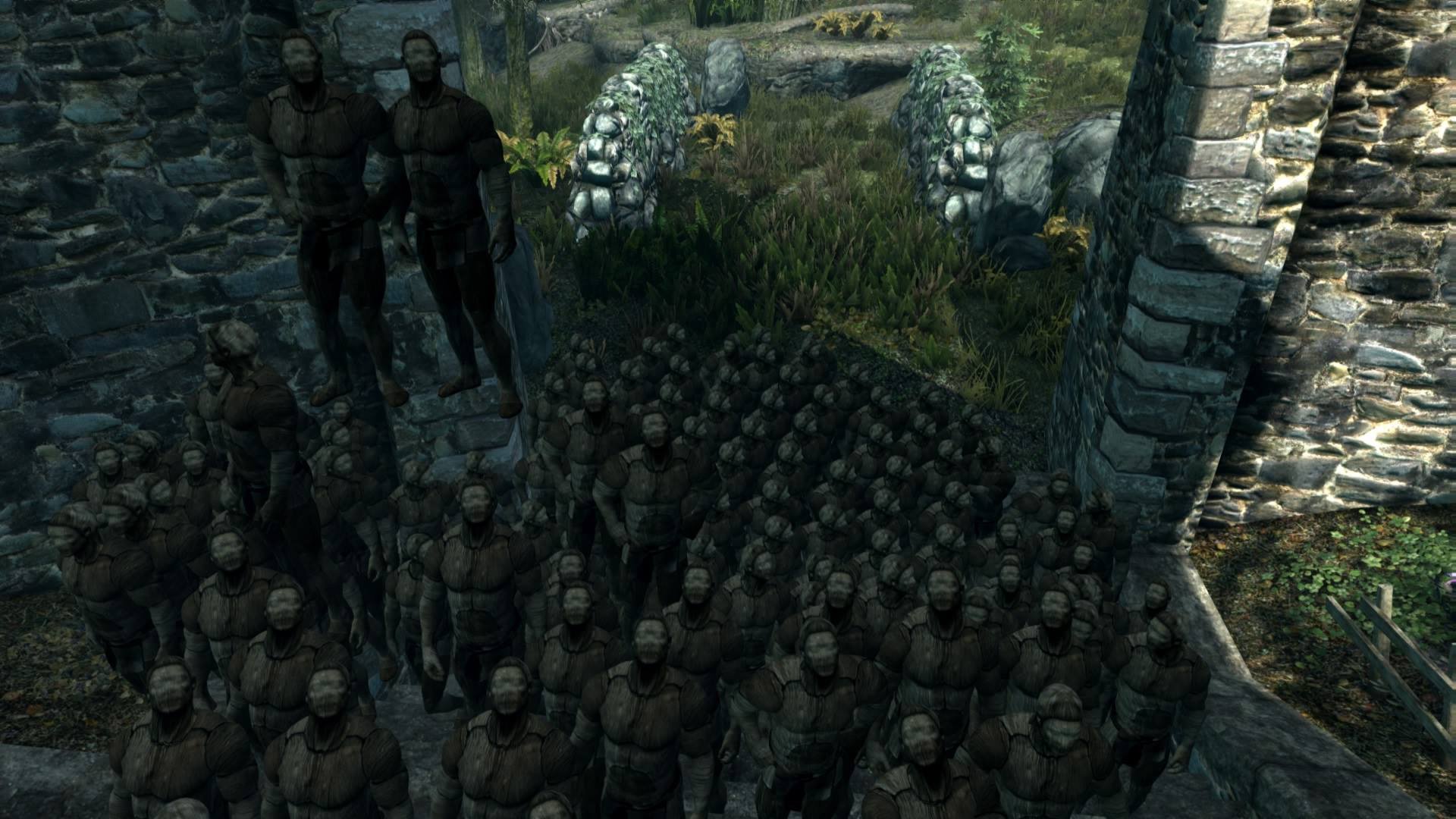 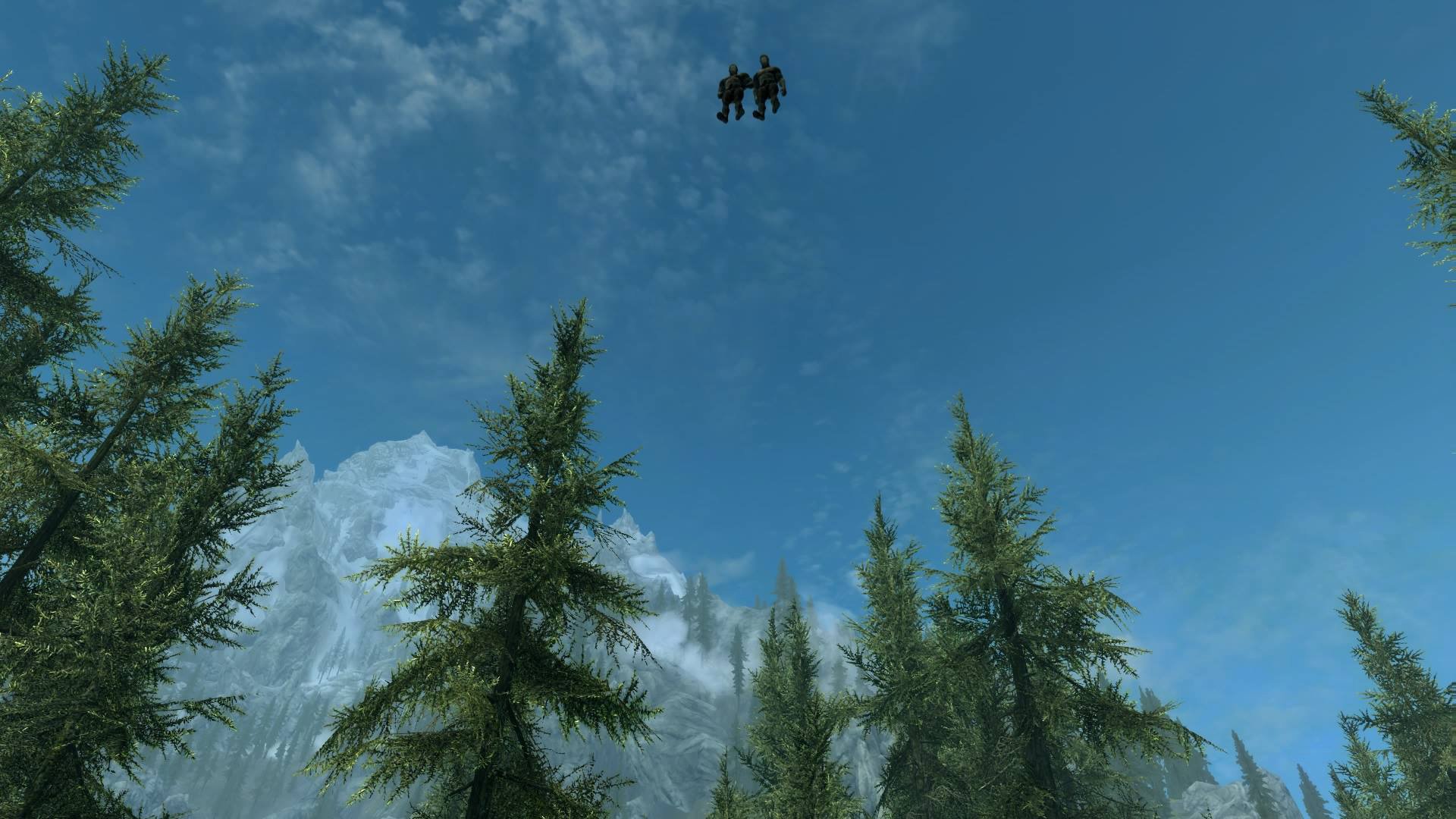