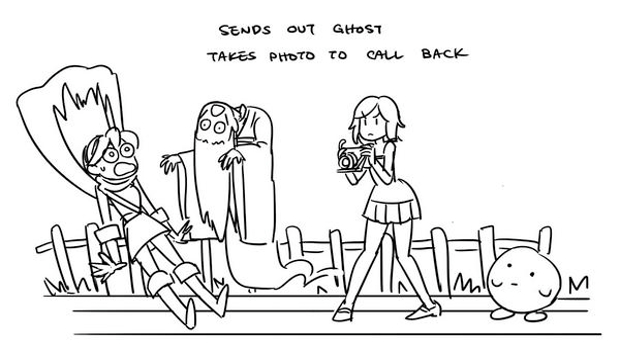 Would you want to see this ‘develop’ into something more?

[Update: Mariel wanted you to know that the heavy lifting on the animation for Double was done by Dave Smith and BahiJD. The original concept for the character came from Skullgirls creator Alex Ahad.]

Mariel Cartwright is one of my favorite artists. She is charged with a passion for the unlikely that often leads to mindblowing ideas. Just look at the animation for Double, one of the characters from Skullgirls, for an example of what her imagination is capable of. Could you ever think of anything like that? If so, I hope you become an artist because that’s pretty great.

Mariel’s passion isn’t just relegated to the craft of animation. She’s also prone to getting carried away with ideas for other games, like her recent flight of fancy regarding a potential Fatal Frame representative in the next Smash Bros. It sounds ridiculous at first, but on further thought, its not so farfetch’d (poke-pun intended). The new Fatal Frame title for Wii U was just shown off at an event in Japan, with Nintendo honcho Shigeru Miyamoto in attendance. Though both companies are guarded around the details, Nintendo reportedly has at at least partial ownership of the series, at least at the moment. It would make sense for them to promote the next game in the series through Smash Bros., even if it’s just with an assist trophy.

What might be even better is a Fatal Frame cameo in Skullgirls Encore. Can you make it happen, Kinuko?