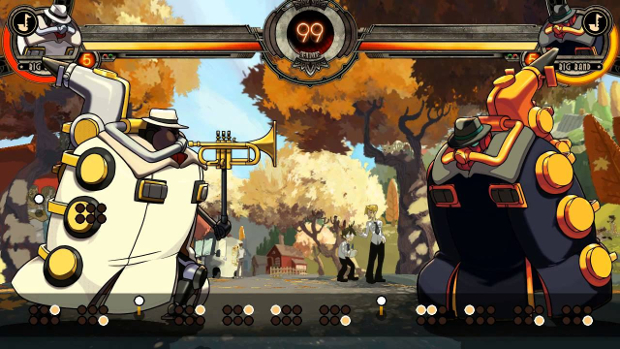 Big Band is coming to Skullgirls Encore for free next Tuesday. He’s the first male character in the game. Finally, some representation. He’s also a mix between Kill la Kill‘s Nonon Jakuzure and FLCL‘s cowboy hand.

His taunts up his supers and he’s the only Skullgirls character that can parry incoming attacks. Sounds like a fun new spin for seasoned fans. Plus, there’s a custom trumpet solo attack. So neat.

Meanwhile, April Fool’s goof and clone character Fukua is actually coming to PS3 (also free) in the coming weeks. She’s being tested in the PC version and, despite being a clone, supposedly plays differently from her fore bearer.

Also check out a sneak peek at the next free DLC character, Eliza, who looks rad as heck. There’s a .gif set of her early animation. Hooray Skullgirls!