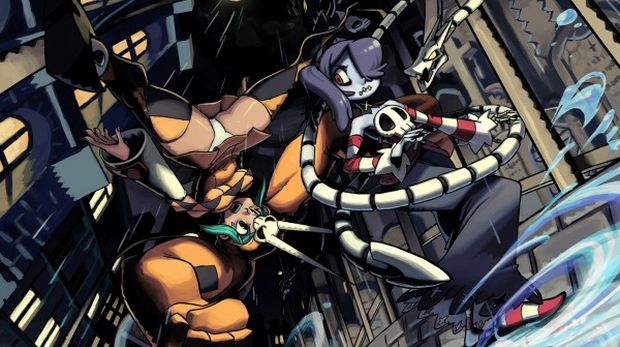 Skullgirls is back from the dead and better than ever. Free from the restraints imposed by former publisher Konami, Lab Zero and Autumn Games have brought the indie 2D fighter back with a vengeance with Skullgirls Encore.

If you purchased the original Skullgirls on the PS3, you should have received a private message with a link to download Skullgirls Encore for free. It took me a couple of days to get mine, but now that I’ve got it, I won’t be putting it down for a while. 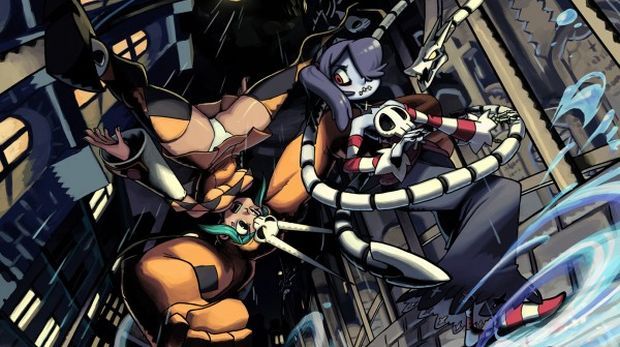 Speaking of deadness and vengeance, the star of Encore is a very new (on consoles), very dead looking young woman named Squigly. She’ll be available via free DLC for the next 3 months, the first of five new entries to the roster to be rolled out gradually, each free to download for a limited time after release.

Squigly has quite a diverse but familiar move list, with attacks that that seem inspired by Mortal Kombat‘s Scorpion, Darkstalkers‘ Jedah and Hsien Ko, and Street Fighter‘s Sakura. I say Sakura and not Ryu or Ken because like Sakura can with her hadoken, Squigly can charge her specials, changing the range and power of the attacks. Like all the Skullgirls characters, she’s beautifully animated, with tons of evocative, charming little hand drawn touches. Her walk forward animation is one of my favorites — subtle and adorable. Great job, Mariel and friends.

There is a lot more to this update than just Squigly. There’s also the unlockable “Marie 300%” mode hidden in the Extras section, 3 new backgrounds, and more system tweaks and additions than you can shake an umbrella at. So far, the GGPO netcode seems just as solid in Encore as it was in the original, though my PS3 did freeze directly after a couple of matches. I’m sure that bug will get worked out sooner rather than later.

Skullgirls is easily my all time favorite 2D fighting game… in theory. The combat system, the animation, the mix of silly, strange, and serious are all just about perfect. The only thing holding it back from trouncing other fighters like Street Fighter 3: 3rd Strike and Marvel Vs. Capcom 2 off my personal tier list of 2D fighters is the game’s relatively small roster.

With the arrival of Squigly, and four more new fighters on the way, Skullgirls Encore could very well be on it’s way to the number one spot.