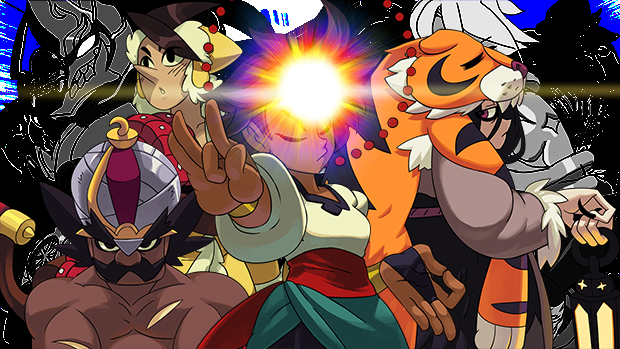 Up on Indiegogo, with a playable demo

Back in July we got a barebones announcement that Skullgirls developer Lab Zero Games has been working on a role-playing game called Indivisible and that it would begin a crowdfunding campaign for it late in September. It’s a week late from that target, but now it’s here, and we have a lot to look at.

It’s currently up on Indiegogo, and it has already made a decent splash. In about eight hours it has raised over $70,000 toward its funding goal. That sounds like a lot, but the base funding goal is set at a hefty $1.5 million, so there’s still a ways to go.

The reason it caught my attention (and possibly the attention of so many others — thanks to everybody who sent this tip in) is the exploration/metroidvania aspect of it. In the prototype gameplay video below, you can see protagonist Ajna gain an axe, which gives her the new exploration ability to climb sheer rock faces where walljumping isn’t possible.

Not only that, but the seamless transition between exploration and turn-based battle will never stop being cool. Chrono Trigger says hello. Of course, all that is built on some great hand-drawn art and animation.

All of this is currently playable in a demo, downloadable from the official Indivisible site. Lab Zero and 505 Games intend to release Indivisible on Linux, Mac, PlayStation 4, Windows, and Xbox One in 2018.